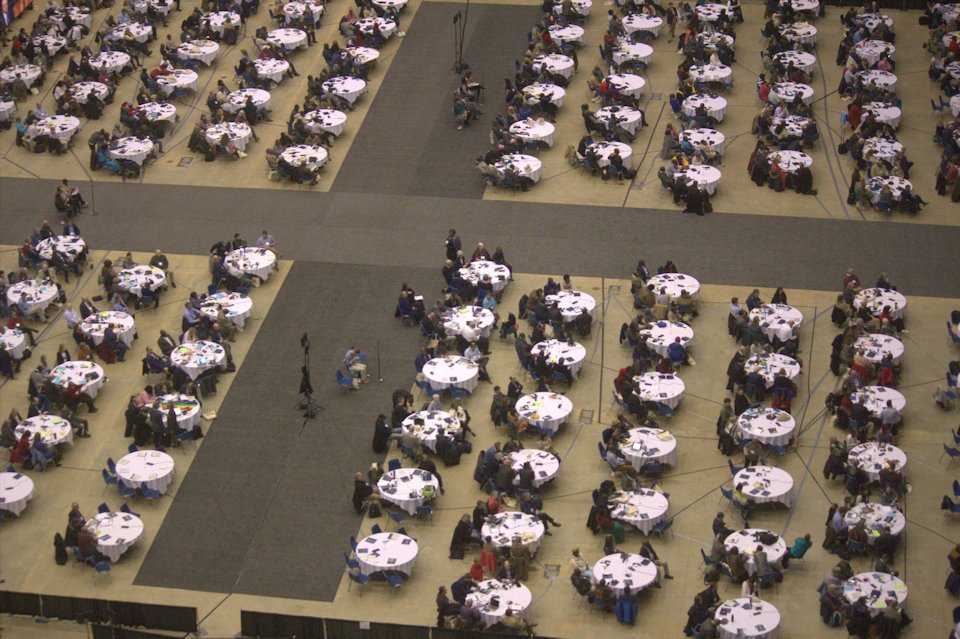 In today’s blog from The Dome in St Louis, the Rev. John Harnish addresses the issues of separation and segregation presented by the 2019 venue for General Conference.

For every good reason, the United Methodist General Conference and our hosts in the American Center in St. Louis have gone to great lengths to assure proper security for the thousands of delegates and observers who gather for these four days. Everyone entering the facility must pass security personnel who are equipped with wands and inspect all bags. It’s the kind of security to which we have become accustomed at any major event in these times. But the high level of security has also created some uncomfortable bottlenecks and road blocks. On Sunday morning long lines of observers and delegates waited in the whistling wind and 30 degree temperatures for up to an hour to get in, which meant a good number of them arrived late for the opening worship. Hopefully there will be better accommodations for the on-going days of the conference so we can assure both appropriate security and a better level of convenience for the participants.

Another unintended impact of the emphasis on security is a separation and even segregation unlike  previous General Conferences. At every General Conference there is an established “bar of the conference” where only delegates can enter. But this time, observers, reserve delegates, press and others attending the conference are not allowed access to the floor of the expansive coliseum and can only circulate on the concourses at the upper level. Delegates are not only restricted to the bar of the conference, but to the lower level of the space. And the pressroom is located six stories above the cavernous space in a row of press boxes which are entirely disconnected from the rest of the house. Even with their press passes in hand, the journey to the floor is a long trail through elevators, escalators and numerous security checks. A limited number of photo passes are available which permit 10 journalists at a time to have access to the floor around the bar of the conference.

Michigan reserve delegates, observers and hangers-on have tended to settle into section 133. The excellent sound system and video screens help them stay connected with a broad view of the conference, but the downside is that no one really has access to the delegates, even during breaks and mealtimes. The inability to speak to the members of the delegation face to face is a downside of the huge space and the security which is in place. Thankfully social media like Groupme, Facebook, texting and email help to fill the gap, but in a representative and democratic system, the distance between delegates and the rest of the world is palpable.

Thanks to Bishop Bard’s opportunities for conversation across the state, members of the Michigan delegation have had numerous opportunities to hear from Michigan United Methodists in preparation for this conference. Even though they are somewhat “out of touch” at this point, they have heard the concerns and carry the prayers of Michigan Methodists with them into this massive and secure space. Hopefully, Michigan United Methodists are praying for them as they carry out their work here.

Joy Murphy, from Grand Rapids, is one of the volunteers serving as a marshal at the conference. Joy said, “When I look up into those rows of seats in the upper levels (the stadium can seat 65,000 people!) I envision all the folks at home, that great cloud of witnesses who are gathered around watching what we do here. It’s a great honor to be part of it.” And from the cheap seats on the concourse, we will be watching and praying for all the delegates and for the future of The United Methodist Church.