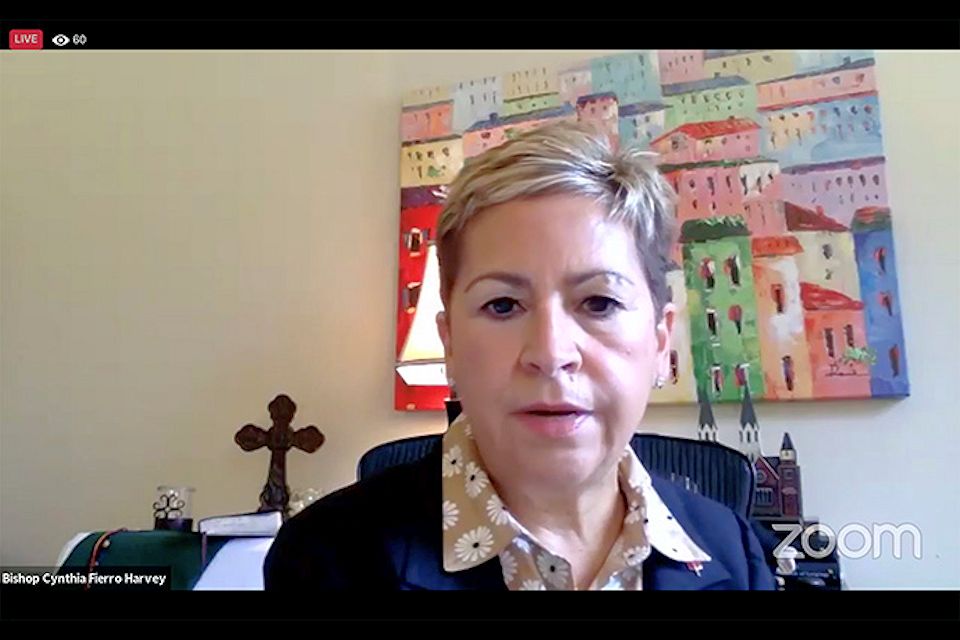 United Methodist Bishop Cynthia Fierro Harvey presides over an online meeting of the denomination’s Council of Bishops. Amid financial pressure and a potential denominational split, the council called for postponing elections of new U.S. bishops and urged that five new African bishops be added only as resources allow. ~ UM News screenshot via Zoom

The Council of Bishops wants to postpone electing any new bishops in the U.S. and slow down adding more bishops in Africa.

United Methodist bishops — faced with dwindling funds and a potential denominational split — want to hit the brakes on electing new bishops in the U.S. and adding more bishops in Africa.

Bishop Cynthia Fierro Harvey, Council of Bishops president and leader of the Louisiana Conference, announced her colleagues’ recommendations for stabilizing the denomination’s Episcopal Fund at the end of a Nov. 2-5 online meeting.

Over four days, some 115 active and retired bishops spread across four continents discussed the leadership necessary for the church’s future — including the continuing work of dismantling racism. Most of the bishops’ sessions were closed to the public.

At present, 14 U.S. bishops plan to retire in the coming year or take on new roles with the Council of Bishops. In July 2020, the North Central College of Bishops announced a plan for interim leadership. The plan includes Bishop David Bard serving as the episcopal leader of Minnesota and Michigan starting January 1, 2021.

The Council of Bishops recommends that the five U.S. jurisdictional conferences — now scheduled for next year — postpone any elections of their successors until 2024.

“We support the grassroots movements not to elect bishops until the next quadrennium,” Harvey told United Methodist News.

“Many creative and adaptive ideas and models are already being discussed in the jurisdictions,” she added.

The council also urged a slowdown in plans to add five more bishops in Africa, increasing the number from 13 to 18 on a continent where The United Methodist Church is growing.

General Conference was initially set to meet in May this year until the COVID-19 pandemic forced postponement. General Conference organizers now have rescheduled the gathering for Aug. 29-Sept. 7, 2021, in Minneapolis.

During the meeting, Harvey stressed that the bishops’ recommendations came after “the bishops spent a great deal of time in discernment.”

Last year, United Methodist financial leaders warned the Council of Bishops that without changes, the Episcopal Fund that supports the bishops’ work would run out of money by 2024.

There are 66 bishops supported by the fund — 46 in the U.S., 13 in Africa, four in Europe, and three in the Philippines.

Most of the fund’s revenue comes from the denomination’s annual conferences, church regional bodies that each pay apportionments — or shares of giving — to support denomination-wide ministries. U.S. conferences provide about 99% of funding for general church ministries.

The COVID-19 pandemic has led to diminished church giving and accelerated the fund’s decline. If current giving trends continue, the denomination’s General Council on Finance and Administration Fund projects that the fund will receive about $17.4 million this year — about 75% of requested apportionments.

Harvey said postponing new U.S. bishop elections would save the Episcopal Fund about $10 million in bishop salaries and benefits between 2021 and 2024.

She added that if apportionment collection rates drop below 65 percent, the General Council on Financial and Administration may resort to reducing bishops’ salaries and further reductions in their housing allowances and support for their office staff.

Similarly, slowing the addition of African bishops has the potential to save money. GCFA estimates that each African bishop currently costs about $800,000 over four years.

The denomination also appears to be on the verge of some kind of split after decades of intensifying debate over the status of LGBTQ Christians. The coming General Conference faces multiple separation proposals, including a mediated agreement that, if accepted, would allow churches and conferences to break away to form a new, traditionalist denomination.

However, the denomination’s financial leaders do not yet know how many churches, conferences, or bishops would leave if such a plan won approval. A conference can join a new denomination while its bishop remains with The United Methodist Church.

It remains unclear what a postponement in U.S. bishop elections would mean for how each jurisdiction handles episcopal oversight.

Jurisdictions in the U.S. and central conferences in Africa, Europe, and the Philippines are the denomination’s intermediate organizational bodies. They each consist of multiple annual conferences. They also each elect bishops and set the number and boundaries of the episcopal areas they serve.

Jurisdictions have the authority to merge episcopal areas. With the approval of the Council of Bishops, retired bishops also can serve in interim roles. When that happens, the Episcopal Fund pays the difference between the retired bishop’s pension amount and a bishop’s current salary level.

“We recognize that this work is done and decisions are made in the jurisdictions,” Harvey said. “Our work will be to help facilitate conversations with jurisdictional leaders, colleges of bishops and delegates, and sharing information to help them do their best work.”

She also said bishops would work with General Conference’s Standing Committee on Central Conference Matters in phasing in the new African bishops.

Harvey credited the bishops’ Sustainability of Episcopal Fund Task Force, which the bishops established in May, with guiding their work. She said the task force collaborated with Wespath, the denomination’s pension agency, and the General Council on Finance and Administration in developing the recommendations.

“Their work was totally focused on our ability to continue our United Methodist witness to the world,” Harvey said.