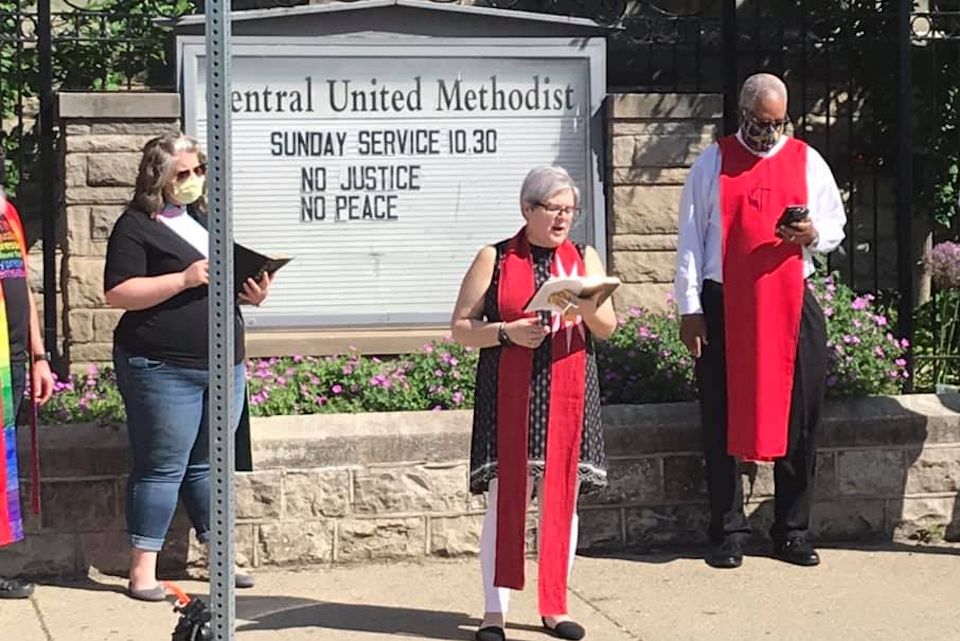 United Methodist, Evangelical Lutheran Church of America, United Church of Christ, and Roman Catholic leaders read from the Bible about love, justice, anger, and hope in front of Central UMC in Detroit on June 5, 2020. They were called to witness by the Rev. Jill Hardt Zundel, Senior Pastor of Detroit Central (center). ~ Facebook/Paul Perez

The Cabinet and the Board of Justice, leaders in The Michigan Conference, offer witness and resources to help local churches prepare for persistent antiracist action in communities across the state.

When people took to the street following the death of George Floyd, United Methodists were among them. Online sermons immediately began to reflect themes of justice, multicultural awareness, and racial harmony. Pastors like the Rev. Jill Hardt Zundel, Senior Pastor of Detroit Central United Methodist Church, organized acts of witness. On June 6, she and other faith leaders across the Protestant and Catholic spectrum responded to her invitation to read their favorite Bible passages on the downtown sidewalk in front of the church.

In the past several days, leaders of The Michigan Conference have also made new commitments to antiracist action. They have encouraged local churches around the state to join them in confession, the gaining of new awareness, the building of community marked by inclusive relationships.

In his blog entitled, “Prophets, pastors, politics, and pandemic,” released on June 1, Bishop David Bard said, “The suffering of our world, the deep injustice of our society, has been made horribly and painfully evident in recent days by the video showing the killing of George Floyd by a police officer in Minneapolis, Minnesota. George Floyd was African-American. The police officer was Caucasian. The name George Floyd joins the names of other African-Americans recently killed by law enforcement or by citizens acting as if they were law enforcement, Breonna Taylor, Ahmaud Arbery.”

Bard added, “Racism is as virulent a virus as the coronavirus, and it is also lethal. It is lethal in brutally public ways, as in the deaths of the individuals I’ve just named. It is lethal in quieter ways, in the effects of poverty, lack of educational opportunities, sub-standard health care, lack of access to healthy foods. These realities are rooted in our country’s history.”

The Full Cabinet of The Michigan Conference followed with a statement of commitment. It began with these words: “As United Methodist Christian leaders appointed or elected to responsibilities for and within the Michigan Conference and our nine districts, we, the Full Cabinet members, make the following commitment. We do this in response to the justifiable protests created by the murders of George Floyd, Ahmaud Arbery, Breonna Taylor, Tony McDade, and Dion Johnson and the underlying systemic values and patterns that brought these tragedies about. We, as the Full Cabinet, confess our need to own this to identify and address institutional racism that exists within the Conference structures as well as our complicity as individuals. We invite you, the reader, to own it for yourselves and your ministries, too.” Read the commitment statement here. 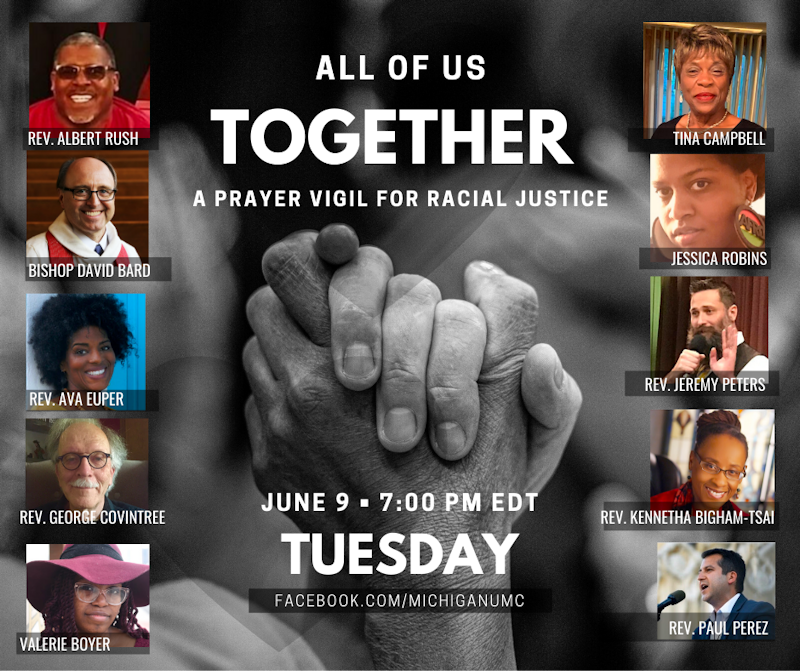 Then on the evening of June 9, an online Prayer Vigil for racial justice with the theme, “All of us together,” was aired online, connecting persons around the state with prayer, prose, poetry, and song. The Rev. Paul Perez, Associate Director for Mission and Ministry, hosted the event. Perez moderated the sharing of eight honored guests, all of whom added their insight and spiritual focus to the evening.

Perez began with a statement of purpose and intent. “This vigil is to stand in solidarity with protestors—the growing nation-wide movement that has taken to the streets night after night after night in the wake of killings of Ahmoud Arbery, Breonna Taylor, and George Floyd. A movement demanding, ‘Black Lives Matter,’ creating a moment, once again, for the country to reckon with the sin of racism.” The host acknowledged that viewers were bringing with them, “different feelings and emotions—lament, anger, shame, impatience, confusion—and invited comments on Facebook and Zoom.

Perez introduced Ave Euper, pastor of Elsie United Methodist Church, who opened worship with scripture and prayer. After ready from Isaiah 1:1-3, Euper cited other scripture that speaks to the deep injury and pain of the moment. She called listeners to turn lament into righteous anger and righteous action.

She was followed by the Rev. Kennetha Bigham-Tsai, co-chair of the Michigan Delegation to the 2021 General Conference and Chief Connectional Officer of The United Methodist Church. Her reflection was titled, “A Letter to the American Church (upon the death of George Floyd)”. “It looks like Black bodies are expendable. Black pleas for help, ignorable. The words, ‘I can’t breathe,’ repeated across the years from the lips of Eric Garner to the desperate pleas of George Floyd. This is what white racism and violence in America look like,” she began.

Bigham-Tsai referenced her own experience with the “landscape of the terrors of racism” and shared Psalms thanking God for God’s presence among the dispossessed and suffering. She concluded with a challenge to the church to fully acknowledge the scourge of racism and commit to ending that scourge. “It is up to us, as the Church, of every denomination to break the bow and shatter the spears of white supremacy in our country.” And to do so with pastoral presence and prayerful resolve.

Two poets, Valerie Boyer, and the Rev. Jeremy Peters, offered a conversation poem. Boyer is a member of Southfield: Hope United Methodist Church and Peters serves God’s people at Flint: Court Street UMC. The poem, “Let’s Talk,” may be viewed here. It captures the dynamics of many dialogues that take place among persons Black, Brown, and White. View the “Let’s Talk” video here.

Bishop David Bard, episcopal leader of The Michigan Area and “child of Minnesota,” lifted a Prayer for Justice and Healing. His opening remarks acknowledged racism as the original sin of our country that poisons our public life. “We are here,” he said, “to work with God in the creation of a newer world.” Bard prayed for wisdom to distinguish voice from violence and courage of heart to “let our hearts be broken open to new possibilities.”

A musical interlude followed as Jessica Robbins and her saxophone blessed viewers. Robbins studied music at Michigan State University and earned a Master of Divinity from Moody Theological Seminary. Her playing touched the soul.

The Convener of the Conference Commission on Religion and Race, Tina Campbell spoke of resources available for greater understanding and growth. Campbell is a long-time member of Detroit Second Grace UMC. She spoke of her growing up years in Mississippi and noted, “Racism continues to plague our nation today … We have the opportunity to get it right. The question is WHEN.” Campbell reminded Michigan United Methodists of their responsibility to engage in conversation, training, and education of families, churches, and communities. Click here for resources on the Justice and Advocacy page of the Conference website that will guide a journey to new understandings and commitments.

The Rev. Albert Rush, the pastor of Eastpointe Immanuel UMC and leader of the Conference Board of Justice, Division of Church and Society, raised his voice in praise of Christian Tenacity. Recounting the story of the Widow and the Unjust Judge, Rush went on to urge, “You continually ask, and ask, and ask, and ask, and never give up asking until justice is done in our society.” He spoke of the importance of having a seat at the table and asked people to be persistent in “doing the small things” that add up to change. He told several personal stories about his experience as a pastor in a cross-cultural appointment and talked about the importance of relationship building. “Take an opportunity to listen and understand, and don’t be afraid to get it wrong. When you are speaking from the heart, don’t be afraid to say the wrong thing. Your friend of color will guide you,” Rush said.

In the closing minutes of the Prayer Vigil, Paul Perez once again pointed the audience to resources. “This moment is calling us, as The United Methodist Church, UMC, to commit to the work of antiracism,” Perez explained. “We are not to simply be against racism, but work in all that we do to dismantle the racist structures, ideologies, policies, and procedures that harm the lives of people of color, especially black people.”

The Rev. George Covintree, on staff at Nardin Park UMC and Chair of the Conference Board of Justice, offered the benediction. He first shared his experience as a seminarian in Africa, ending with, “We are being called to examine our buckets as a people, a nation, and a church. The hairs of systemic racism have polluted the good spring. Call it out for what it is, a sin incompatible with the gospel.” His closing prayer called upon the Lord to awaken people’s better natures and “irritate us with that unconditional love of yours … Use even us to be builders of a world, a community, a church that is not color blind but color-rich, filled with the diversity of your good creation.”