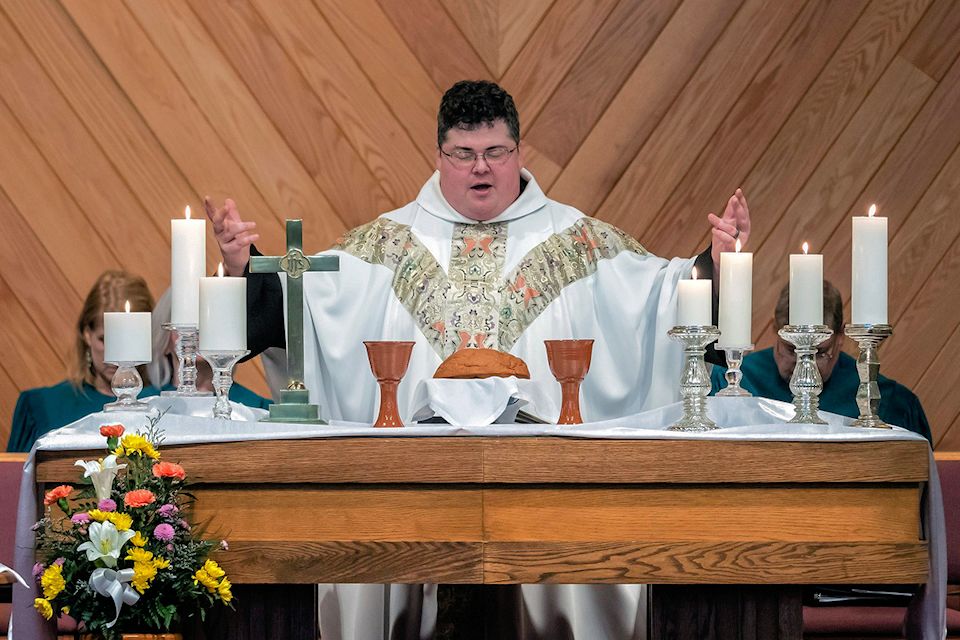 The Rev. Derek Kubilus serves as pastor of Uniontown United Methodist Church in Uniontown, Ohio, though “vicar” is his preferred title. Earlier this year, he debuted “Cross Over Q,” a podcast offering a Christian response to the QAnon conspiracy movement. Photo by Brian Koch.

The Rev. Derek Kubilus, United Methodist pastor in Uniontown, OH, hosts the podcast, Cross Over Q, in an effort to debunk misinformation from QAnon.

The Rev. Derek Kubilus is no cookie-cutter United Methodist clergyman.

He has the dynamic voice of a talk radio host, brings his two Great Pyrenees to Bible study and calls himself “vicar” rather than “pastor.”

Though he has historical and theological reasons for using that title, Kubilus acknowledges it’s a way of standing out — a rhetorical bow tie.

“Honestly, I just like to be different,” he said.

Kubilus, leader of Uniontown United Methodist Church in Uniontown, OH, stepped out further in late January when he launched a podcast called “Cross Over Q.”

It offers a Christian challenge to the QAnon conspiracy movement, which has been a big news story since the Jan. 6 attack on the U.S. Capitol, when “Q” signs and clothing could be seen among the mob.

Kubilus’ podcast came to the attention of CBS’ “60 Minutes,” with Lesley Stahl interviewing him for a Feb. 21 report on QAnon.

That exposure has made for an interesting few weeks for Kubilus, including a bigger audience for his podcast, more interview requests, and lots of fan mail. He’s had hate mail, too. But he’s making peace with that.

“It’s all worked out. I’m thankful people are tuning into the podcast and the message is getting out there,” he said.

Kubilus’ message, in brief: QAnon is a lie but also a pernicious force that the church needs to call out, with compassion.

“We owe it to God to start this conversation,” he said during his Feb. 26 podcast.

Kubilus, 38, grew up attending Montrose Zion United Methodist Church in Akron, OH. He knew by age 13 that he would be a minister. After studying Bible and theology at Malone University, he earned a master of divinity degree from Duke Divinity School.

Since 2010, he’s been serving East Ohio Conference churches, and he’s been an ordained elder since 2014.

Through the years, Kubilus noticed the strain that polarized U.S. politics was placing on families and congregations. He read news accounts of Pizzagate, a conspiracy theory alleging a child sex trafficking ring operated by Democrats. The hoax led to a Dec. 4, 2016, shooting at a Washington pizza parlor by a man who thought he was at the ring’s headquarters.

Pizzagate was followed the next year by anonymous internet postings from a supposedly high-ranking federal official with clearance to classified information. These messages from “Q” grew into QAnon, described by the BBC as a “wide-ranging, completely unfounded theory that says that President Trump is waging a secret war against elite Satan-worshipping pedophiles in government, business, and the media.”

Kubilus said, “I first heard about QAnon in 2018, and just kind of passed it off as a fad. But then people started talking about relationships they were having that were really strained by people who were believing in conspiracies.”

On Jan. 6, Kubilus and his wife, Maggie, watched in horror the televised scenes of the storming of the Capitol.

“When the Capitol insurrection happened, and I saw Q flags and crosses and Confederate flags all being marched into the Capitol, I felt like I needed to do something,” he said. “I’d already been doing a church podcast, with sermons and devotionals. I said, ‘You know, I understand this technology, and I think I have something to say.’”

By late January, he had debuted “Cross Over Q,” which can be found on Spotify and other platforms.

Kubilus’ purpose is, in part, to raise awareness of the threat of QAnon and other conspiracy theories. He’s committed to debunking but also wants to offer Christian compassion.

“The victims of QAnon are not bad people,” he said. “They’re just folks who have fallen down a rabbit hole of misinformation.”

Kubilus is sure the rabbit hole is crowded and cites an American Enterprise Institute survey suggesting more than a quarter of white American evangelicals believe the QAnon theory is at least mostly true. Fifteen percent of white mainline Protestants are in the same camp, the survey found.

“I guarantee you know someone who is infected with this stuff,” Kubilus said on his first podcast.

After only a couple of “Cross Over Q” episodes, Kubilus was asked to be on “60 Minutes.”

“I said, ‘I’m going to have to pray about this, and talk to my wife and my district superintendent and some of my mentors,’” he recalled.

Kubilus ultimately welcomed a film crew to Uniontown United Methodist, and on a snowy Sunday, they got footage of him in the makeshift outdoor shelter from which he has given parking lot sermons during the pandemic.

“The actual interview was about an hour and a half, and they used about a minute,” he said.

However, Kubilus was able to make the case that the church needs to reach out to those caught up in conspiracy thinking.

“We can show them there’s a whole world of purpose and meaning outside of those lies,” he told Stahl.

Kubilus also shared with her that he’d had conspiracy theory-related conflict in his own family and that his speaking out about QAnon may have driven away a couple of his congregation members.

According to ratings, the Feb. 21 “60 Minutes” was the most-watched program of the week, drawing more than 9.5 million viewers.

The network TV appearance led to more media interviews for Kubilus and helped swell his podcast subscriptions to about 2,500. He’s had email from all over, including from fellow clergy saying they intend to speak out, too.

“That makes it all worthwhile,” he said.

Kubilus also has heard from detractors, some calling him a false prophet and questioning whether he might be part of a Democratic cabal.

In the first “Cross Over Q” episode, Kubilus announced he was not a Trump fan, but also wasn’t one to “wave the Democratic banner.”

“I do not believe that this is a conservative versus liberal issue,” he said by phone. “I think as Christians we are called to think about things beyond the parameters of Democratic versus Republican.”

Though it’s been a stimulating stretch for him, Kubilus plans to do only a few more “Cross Over Q” episodes. He’s working on a book, but it has nothing to do with QAnon.

“This way of thinking about the world has spread very far and very fast,” he said. “I refer to it as a mind virus.”