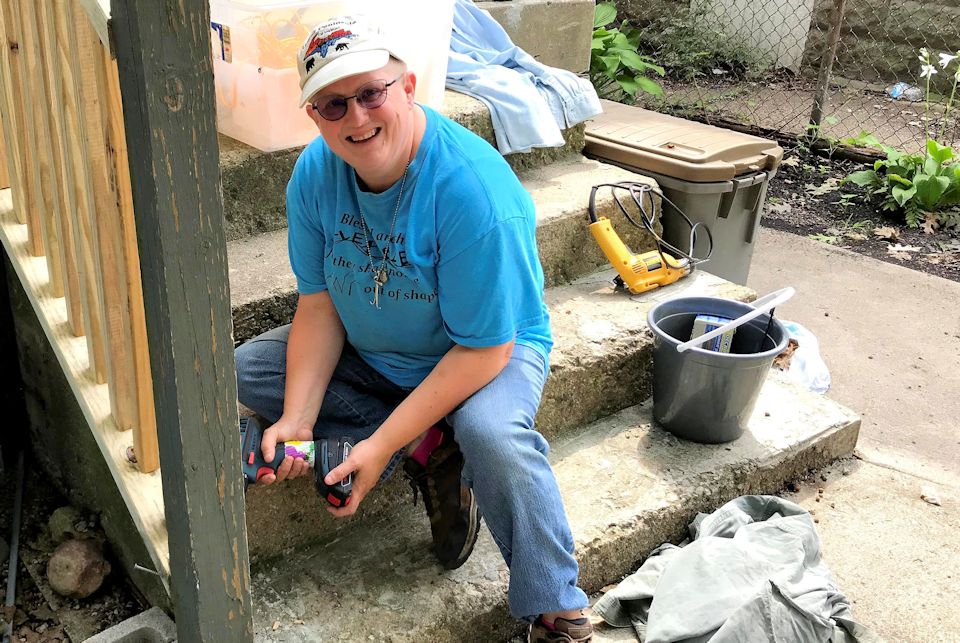 Katie Peterson has been in service as a Church and Community Worker for 23 years, including a stint in Michigan’s Upper Peninsula at God’s Country Cooperative Parish.

Katie Peterson learned her construction skills in Michigan’s Upper Peninsula as a Church and Community Worker with God’s Cooperative Parish. “The parish included seven churches in 2,500 sq. miles,” she said. She compared that to a previous assignment in Tennessee, in which 15 churches comprised a parish across 500 sq. miles.

“Yes,” she said, “up there, each church was a beacon in its own community, but they all knew that they needed one another to keep going. I learned how to do lots of construction – shingles, drywall, aluminum siding – in the remoteness of the woods.”

Those skills and others learned throughout her 23 years in mission service contribute to her current assignment with the Western Pennsylvania Conference at its Eastbrook Mission Barn in New Castle, PA, a former dairy farm. About half the work of the facility involves building and installing handicapped-accessible ramps. The other half relates to the facility’s role as part of the UMCOR relief supply network. Volunteers collect and verify UMCOR hygiene and cleaning kits coming from area churches and other organizations. The Mission Barn stores and ships kits to disaster areas at UMCOR’s request.

Normally the mission barn hosts volunteer teams throughout the year, with many from Pennsylvania and nearby Eastern Ohio working for the day. Some groups from further distances stay in the community longer, but 2020 was nothing like a normal year. Before COVID-19, they’d ship out 20,000 kits annually, with about 2,000 staying in the four-conference area: Upper New York, East and West Ohio, and Western Pennsylvania.

“Last year we sent out 2,000 hygiene kits to West Ohio and Western PA because of COVID. We shipped 1,400 buckets to another UMCOR network location in Illinois,” Peterson confirmed.

Eastbrook Mission Barn works with Highland House, a halfway house for men recovering from alcohol and drug addictions. A few of them volunteer once a week to help in the barn and build ramps with the team in the community.

Before COVID-19, the mission barn regularly hosted a high school group and four adult day groups as well as church and community groups. Members of the adult day groups may have different kinds of handicapping conditions and may be differently-abled, in terms of what tasks they can do, but they work side-by-side with “typically abled” volunteers. The differently-abled will often teach the typically abled how to put together the UMCOR kits or other tasks as needed.

“It has opened my eyes to see we are all God’s children with something to contribute, it doesn’t matter if we have drug or alcohol addictions or whatever our challenges might be. We can all work together,” Peterson explained. “I’ve worked with people of different abilities in the past, but never with this many at any given time. We are one of the few volunteer agencies that have stayed open during the pandemic. They love coming to the barn just as much as we love having them. We hope to see more groups return after the pandemic.”

Peterson describes herself as a preacher’s kid from West Ohio who felt God’s call to service during a mission event in Fremont. She earned a Bachelor of Arts degree in Gerontology from the College of Mount St. Joseph in Cincinnati. From 1998-2000, she served as a US-2 missionary with an inner-city church in Memphis, TNnnessee, where she was introduced to deaconesses and Church and Community Workers and learned about mission vocations in the United States.

“Before then, I had no idea there were missionaries serving in the United States,” she said. In 2001, she was commissioned as a United Methodist deaconess, and in 2004, as a Church and Community Worker. While in Memphis, she earned her Master of Arts and Religion in Christian Education from Memphis Theological Seminary. Her brother, John Jessup Peterson, was commissioned in 2016 as a Home Missioner and works at Candler School of Theology at Emory University in Atlanta.

“It has opened my eyes to see we are all God’s children with something to contribute, it doesn’t matter if we have drug or alcohol addictions or whatever our challenges might be. We can all work together.” ~ Katie Peterson

Church and Community Workers are commissioned missionaries of Global Ministries whose ministries focus on the poor and disenfranchised in rural and urban areas throughout the United States. They work to change the social inequities of poverty, racial injustice, and domestic violence. Today, deaconesses, and their male counterparts, home missioners, are commissioned for lifetime service by United Methodist Women.

In addition to serving existing ministries, Katie Peterson has been called to help start new mission ministries. After working with God’s Cooperative Parish in Michigan for seven and a half years, she moved to Williston, ND, to work with an ecumenical ministry. Between 2008 and 2012, Williston’s population jumped from 6,000 residents to 30,000 when an oil company increased drilling. There was plenty of work but a lack of housing and skyrocketing prices. Workers were living in their cars. Many people came from other parts of the country to work in the oil fields, but some were not prepared for the North Dakota winters.

Peterson and her colleagues developed the Out in Faith Bakken Oil Rush Ministry that provided shelter, food, warm clothes, and blankets. They were serving anywhere from a dozen to 40 people a week. Today, the ministry continues through the ups and downs of Williston life, serving an average of 200 clients a week.

Relief in many forms

Most years, Peterson’s team builds about 25 ramps for individuals and families in the surrounding area. In 2020, though they lost two months because of COVID-19 restrictions in the state, they still managed about 25 ramps before the winter months closed their season.

One of the ramps last year was for a 14-year-old boy who had lost his leg because of a hereditary health condition. The family obtained a wheelchair, but the only way for him to get in and out of the house was for a family member, usually his 16-year-old brother, to carry him.

The day after Peterson’s team finished, the young teen was already using the ramp to ride up and down his street to visit his friends. When schools open, he will be able to get to the school van by himself. In December, Eastbrook Mission received word of a handicapped-accessible van that someone was willing to donate, so this family received a second gift.

“It was just because of God’s grace that we were able to help them with a ramp and a van. We don’t normally help with extra things like that, but God provided, just at the right time,” Peterson added.

And the good work multiplies. “Over the past 13 years, we have trained 12 other ramp ministries in our conference,” Peterson noted. When requests come for ramps some distance from New Castle, Peterson can refer people to one of these 12 ministries.

You can serve, too

Is God leading you to serve as a missionary? The General Board of Global Ministries has a variety of opportunities to help you to find that place where, in the words of Frederick Buechner, “your deep gladness and the world’s deep hunger meet.”