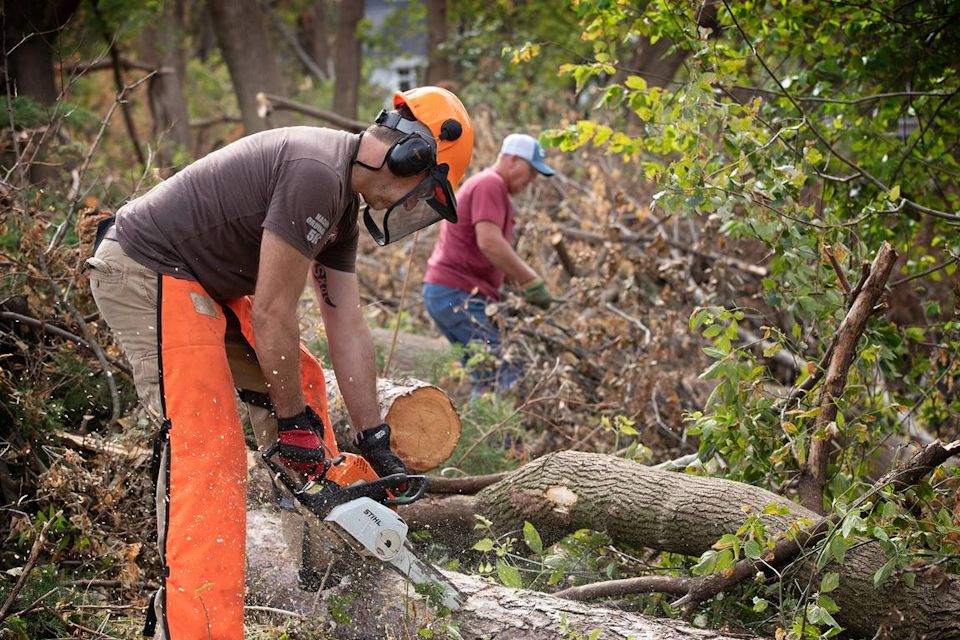 Across the United Methodist connection, volunteers, with chainsaws at the ready, are cleaning things up and acting as a caring presence for Christ.

A chainsaw might seem like an unlikely ministry tool, but for hundreds of United Methodists, wielding a chainsaw takes them into the mission field. For tens of thousands more, the sound of the saw offers caring and hope.

Throughout the United Methodist connection, chainsaw-carrying disciples join emergency preparedness and disaster response teams, as well as find ways in their local communities to help their neighbors.

“We clean things up, listen to people and try … to be a caring presence for Christ,” explains Catie Newman, disaster response coordinator with the Iowa Conference. “These teams just happen to do it with chainsaws.”

An August 2020 derecho through the Midwest sent the Iowa disaster response team into action for months, with Andrew Happ behind his chainsaw from mid-August through October.

“I think sometimes we put (our mission) in a box and say that we do it by prayer meetings or going to church,” says Happ, associate pastor at Center Point United Methodist Church in Center Point, IA. “In all reality, it’s about the relationship with the other person. That’s something we experienced big time.

“We met people who were distraught. Everything they’ve placed identity in is compromised and we have an opportunity to be there and present, and remind them they are loved. God has not forgotten and God is moving in and through somebody with a chainsaw and gloves and a rake or whatever it may be.”

Happ recalls arriving at the home of an older couple whose tall, old white oak tree had fallen in the backyard.

“All of their kids – their six kids – and a whole bunch of grandkids played in that tree and they loved it,” Happ says, recalling the couple’s one request.

“They asked if we could cut some little chunks (from the tree) to give to their kids and their grandkids to remember a part of their childhood.”

The experience was a good reminder of their mission.

“The power of prayer and connecting with the residents is more important than moving a tree,” Happ emphasizes. “But in the end, if we are able to do both things, that’s our focus.”

The chainsaw team at Tri-Lakes United Methodist Church in Monument, CO, focuses on disaster preparedness rather than response. The national award-winning program uses a neighborhood ambassadors program to organize and teach residents about wildfire mitigation, including thinning of trees, vegetation, and brush, and removal of highly flammable vegetation.

The church provides these services, which include chipping, free to the residents, a fact in which the team is especially proud.

“We have not charged a single penny in the seven years we’ve been doing this. We’ve never charged anyone and we’re not looking to do that,” says Andre Mouton, who heads up the program with Lisa Hatfield.

“Our church’s mission is to build followers of Jesus Christ who love God and neighbor,” Mouton states. “We are becoming better disciples of Jesus by doing this type of work. We ask how can we bring people closer together and closer to God? This is an avenue for how we can meet our mission.”

The folks at Tri-Lakes got their start by working with Hope Restored Ministries and Sunrise United Methodist Church following the Black Forest Fire in 2013.

Being in the woods

For Wes Hurlburt, being a chainsaw-wielding member of the Wisconsin Conference’s Volunteers in Mission is just like going to church camp, literally.

Twice a year for more than 20 years, Hurlburt and his friends have spent a week at United Methodist camps in Wisconsin.

“When you have 400 acres and a lot of it is wooded, there’s always chainsaw work to do,” Hurlburt says.

“There’s just something about being in God’s creation and enjoying that beauty and communing with God in that type of setting,” he explains. “I want to maintain that opportunity for other people to enjoy the camps. The typical maintenance and clean-up is very important for that. We like to go and volunteer and do whatever we can to help maintain the camps.”

Have chainsaw, will travel

The Rev. Loren Boyce at Rogersville First United Methodist Church in the Holston Conference isn’t part of a formal chainsaw ministry, but he definitely does ministry with his chainsaw.

“One of my passions within my own theology is helping people, whether it’s with a chainsaw or a paintbrush or a power washer,” Boyce states.

A couple of summer ago, Boyce took an opportunity to put his theology into action when, his wife noticed a fallen tree in someone’s yard following a storm the night before.

He heeded his wife’s “Stop the car!” and she ran to the front door with Boyce’s card, volunteering her husband and his chainsaw to the former stranger.

Boyce, along with the church’s youth group, returned to the home owned by an elderly woman. While the pastor used his chainsaw to cut up the tree, the teenagers raked and picked up limbs.

When the homeowner offered to pay them, Boyce politely declined the gesture.

“I believe,” Boyce says, “you literally are loving God by loving others.”

The belief runs deep among these chainsaw operators.

“As Christians, we are not to be in a building,” Happ remarks. “God didn’t call us to only Sunday worship or Wednesday night. This type of outreach and relationship building, in my interpretation, is what it is to be the church.”