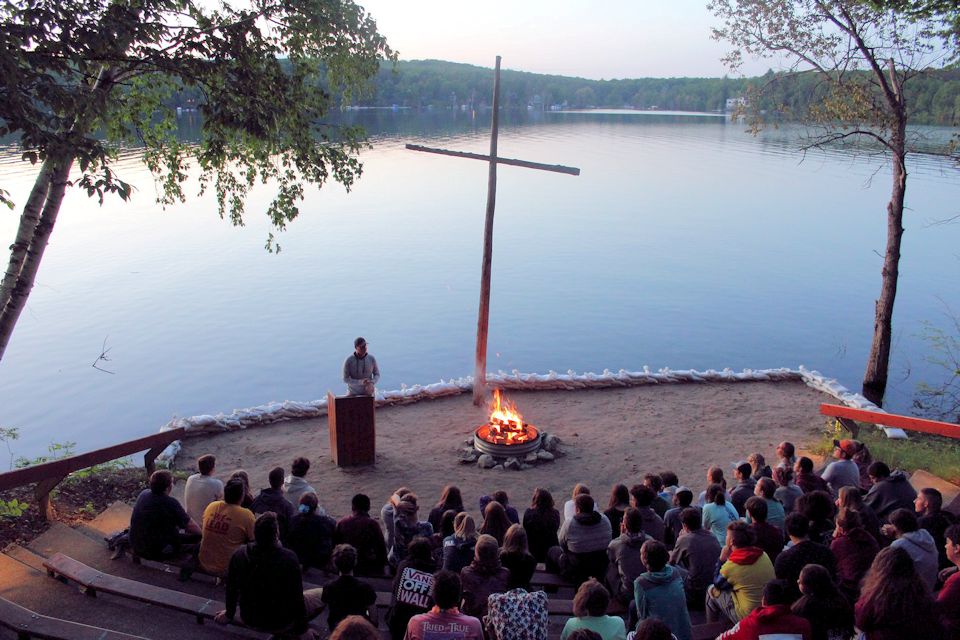 Where does a lifelong commitment to God begin? The Rev. Gary Keene traces his ministry journey from a camp in Michigan to California, through Montana, Nashville, Colorado, and now retirement.

Last year in the midst of the pandemic, I retired after 40 years in ministry. Then, last month, I got the news that a church camp where my call to ministry began was also ‘retiring’; Crystal Springs U.M. Camp was being deconsecrated. And the very next day, in a very connected way, I discovered the origin of my theology and my conviction that camping changes lives. The story goes like this:

In 1973, I went to Crystal Springs as a cabin counselor.  It was the first time I was given a leadership role beyond my local youth group and in the connectional church. Except that back then, I wanted to be a band director, so when my youth pastor, the Rev. Doug Vernon, said he was going to be the dean of a junior high (mostly choral) music camp, I asked if I could be the “band director”; I think we had five flutes, two clarinets, and two boys on drums.

But first, Doug asked if I’d been to church camp; when I said no, he told me I needed to go to my own district senior high camp as an orientation to the church camp experience. And by the way, our church also needed a representative to the conference youth camp, so I got signed up for that, too.

Also, our youth group was scheduled for one of the first Appalachian Service Projects down in Kentucky. Suddenly, I was registered for four weeks of camp. I guess my parents wanted me out of the house (it sure beat mowing lawns!)

So in quick succession, I went to district camp, the service project, the music camp, and finally conference camp. It got interesting right off the top.

During the Wednesday evening campfire at the district camp, I had a classic spiritual epiphany, and I realized I wasn’t going to be a band director. Instead, I needed to tell everyone how great it is to be filled to overflowing with love.

Barely a week later, I was in Kentucky, a dorky middle-class WASP immersed in third-world poverty, learning how to build an outhouse. The juxtaposition of these two profound experiences was crystal clear to me: at district camp, I had been called to ministry. Now, this is what ministry looked like— to love was to serve and lift people up, especially “the least of these.”

After Kentucky, the clock spun forward, and soon I was at Crystal Springs as a cabin counselor. There I saw junior high kids have campfire experiences similar to my own. But it was also clear to me that many were caught up in the social-emotional dynamic of the moment—and it gave me pause.

What had really happened to me? It caused me to think deeply and critically about my own experience, to test it, ground it, develop it, a process that would soon be formalized in the ordination process. It became a lifelong journey of discernment and discipleship.

That journey went on to include working as a church camp manager and ever deeper involvement in camping ministries that culminated in serving as the denomination’s National Director of Camping. All that experience was part of bridging into conference, jurisdictional, and national connectional ministries for most of my professional career.

All of that sat down with me in the pew the day before the decommissioning of Crystal Springs. I was back at a church where I had interned as a student, now for the memorial service of a former conference staff colleague and eventual bishop of the church, the remarkable Beverly Shamana.

So many memories were racing through my head—from Crystal Springs to California, through Montana, Nashville, Colorado, and now retirement; how did I get here! So I was only slightly paying attention when a former seminary classmate got up to read the Old Testament lesson—actually, James Weldon Johnson’s poetic rendition of the Genesis story, “Creation.”

As she read those powerful words, the hair on the back of my neck began to stand up; I refocused as my eyes and heart opened wide—and finally, my memory, too. Suddenly I was back at that Wednesday night district campfire. I could see the stars over the cross at Lake Louise: in the orange glow of the fire, what I recall was a grumpy old retired pastor was speaking this same poem, this same creation story with a dramatic vigor that captivated all of us—and burned into my memory. It was that night, after that story, that oratory, that I heard my call to ministry. It was my creation story.

Ahhhh! So, that’s why my theology has always been so grounded—literally—in creation as the first revelation of God! From there, everything else unfolds, starting with we are all children of the sacred One, and of course we are stewards of creation, and, and, and!

And it all started at church camp. Camps. Thanks be to God!

~ Rev. Keene’s home church was First United Methodist Church Kalamazoo and was first ordained in the former West Michigan Annual Conference. Along with multiple pastoral appointments, for 23 years, he served across six western states as Executive Director of Connectional Ministries and Assistant to four bishops and a writer and teacher for the former General Board of Discipleship. Now retired in Ventura, CA, he remains active as part of a volunteer management team for a wilderness camp accessible only by hiking four miles into the mountains above Los Angeles.