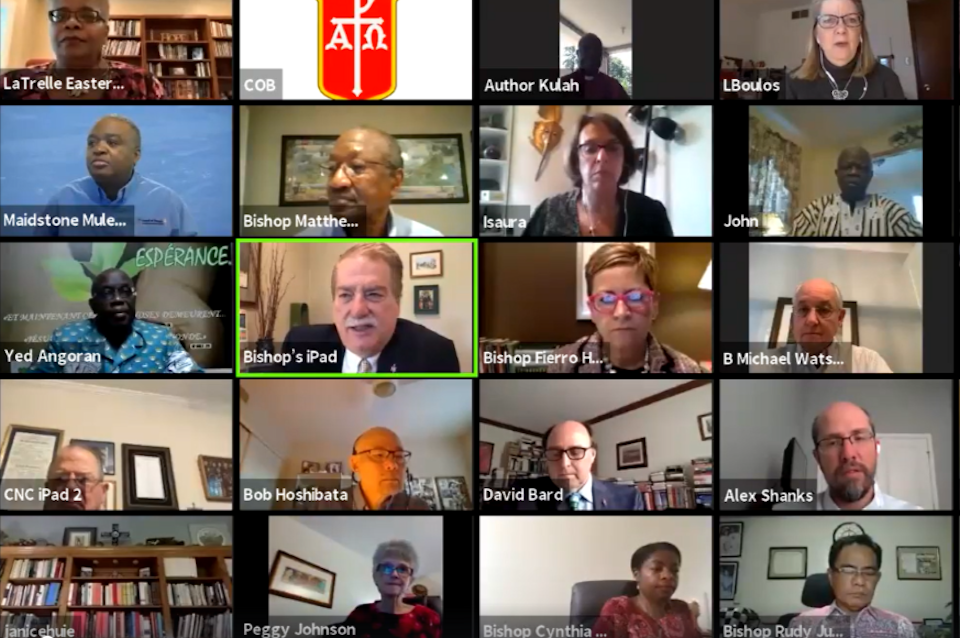 120 bishops from around the globe held their first-ever virtual meeting. They celebrate new ways the church is in ministry during the pandemic.

United Methodist bishops initially expected to spend this year’s spring meeting preparing for a General Conference that possibly would split the denomination.

However, the COVID-19 pandemic has postponed the denomination’s lawmaking assembly and put any plans for separation on hold. For the time being, United Methodists are doing ministry together even as quarantine requires they worship apart.

That global church connection could be critical in overcoming the hardships brought on by the disease, Bishop Kenneth Carter said during his final address as Council of Bishops president.

“One of the implications of COVID-19 is that we are indeed together as a connection,” said Carter, who also leads the Florida Conference. “And in a season of trauma, we claim our strengths — connection, mission, good news of grace.”

He was speaking to United Methodists spread across four continents — bishops meeting by Zoom and the wider church watching a video live stream. And like so many churches dealing with new technologies, the bishops’ first-ever virtual meeting featured a few delays and glitches. However, the bishops’ staff quickly fixed problems, and participants adapted.

For the bishops and others watching, the April 29 gathering began as early as 6:15 a.m. on the U.S. west coast and concluded well after midnight in the Philippines.

The bishops spent most of their meeting talking about the crisis that has caused deaths and disrupted lives around the globe.

As of April 29, Johns Hopkins University reported that the coronavirus had sickened more than 3.1 million people and killed more than 217,000 worldwide.

The U.S. has the highest death toll, with COVID-19 claiming the lives of more than 58,900 people.

However, he and other bishops took time to discuss where they see God at work amid the suffering.

“You know, some people are questioning whether God created COVID-19,” Bishop Mande Muyombo said during the day’s devotions. He leads United Methodists in Tanzania and Congo’s North Katanga Area.

The bishop disputed the claim that this is God’s punishment, saying something so horrible goes against God’s nature.

“Colleagues, God can’t simply prevent COVID-19 or any other natural evil single-handedly, but requires our participation and cooperation to fight it,” Muyombo said.

In his presidential address, Carter discussed ways United Methodists can cooperate with God in the struggle.

“The pandemic has revealed that we are all spiritually hungry inside and outside our churches,” Carter said. “Something new is taking shape.”

Carter described new possibilities for congregations to revitalize. As various parts of the globe begin to reopen, he suggested, “We might benefit from seeing every one of our congregations as the relaunch of a new church.”

Bishop Laurie Haller, who leads the Iowa Conference, told UM News that she appreciated that Carter emphasized that the core work of United Methodists is to create, sustain and strengthen vital congregations.

“We have already witnessed that many people are responding to our invitations to virtual worship in a positive way that we have not seen before,” Haller said. “This is a time that is ripe for evangelism by witnessing to our friends, neighbors, and co-workers of the transforming work of Jesus Christ.”

“This is a time that is ripe for evangelism by witnessing to our friends, neighbors, and co-workers of the transforming work of Jesus Christ.” ~ Bishop Laurie Haller

Carter also talked about what postponement caused by the disease means for the future of a denomination long divided over LGBTQ inclusion and biblical interpretation. Carter was among a diverse group of church leaders that with a mediator developed the proposed “Protocol of Reconciliation & Grace Through Separation,” which General Conference was set to consider.

The coronavirus has postponed multiple gatherings, including General Conference — which has typically met every four years since 1792.

The Commission on General Conference, which organizes the big meeting, has not announced new dates. However, the Council of Bishops, in a mass email to church leaders, listed Aug. 31-Sept. 10, 2021 as the proposed new schedule.

Bishop Rodolfo Alfonso “Rudy” Juan, who leads the Davao Area in the Philippines and serves on the commission, said the disruption in the hospitality industry has delayed the finalization of the dates.

“We are also not the only large organization struggling for new dates,” Juan said. “There are other groups that already secured dates before the pandemic and had to cancel.”

Nonetheless, a group of General Conference delegates and other United Methodists signed a petition urging the commission to reconsider the proposed late summer dates since they happen at the start of the academic year and could reduce the participation of young adults. For the coming General Conference, annual conferences elected a record 120 delegates and reserves who are 35 or younger.

“We acknowledge the complexity of planning and preparing for an event this large and trust that you will take into consideration the voices of the young people of our beloved church who want to engage with this General Conference fully,” the petition said.

Bishop Thomas Bickerton, who serves as the bishops’ representative on the commission, said bishops and commission members have received lots of correspondence about the young people’s concerns.

This is a group that has felt continually marginalized by the church over the years and feels that it might be happening again,” Bickerton said. He said the commission is scheduled to meet May 16 to take up the concerns.

“While the likelihood that the dates will be changed is slim, we would simply say that these young voices do have experience, and they do have the ability to help shape the church and its norms for the 21st century,” Bickerton told his fellow bishops. “We hope that groups like the commission and even this council will invite their voice as we move forward.”

Annual conferences elected about 120 General Conference and reserve delegates who are age 35 or younger, said Chris Wilterdink, who directs Young People’s Ministries for Discipleship Ministries. That represents about 11% of the lawmaking body. For more on the concern about proposed dates of the next assembly, CLICK HERE.

Bickerton also leads the New York Conference — which encompasses the part of the U.S. hardest-hit by the pandemic. He said he hoped the church would stay focused on confronting the disease.

On April 30, the bishops plan to meet in closed session to discuss the legal ramifications of the pandemic-caused delays.

In his address, Carter said he expects the United Methodist tradition to undergo change.

“We are called to lead that change in full reliance on the power and providence of God,” he said.

“We are a resurrection people who are re-created time and again,” said Nhiwatiwa, who leads United Methodists in Zimbabwe. “Even in our differences, we should not relegate our sense of oneness to the periphery. As we minister during the 12 to 18 months before the postponed General Conference, let’s use this time to lean into a connectional church.”