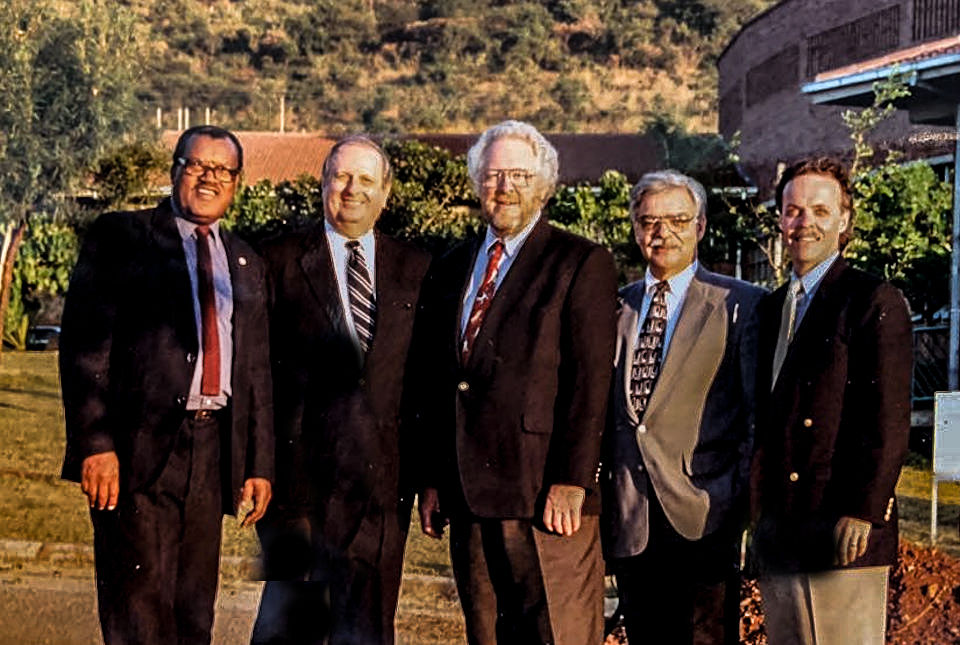 Jack Harnish says, "The word of death of John Kurewa, first Vice Chancellor of Africa University, brought back memories of the early days of the University, with colleagues from the General Board of Higher Education and Ministry. L-r: John Kurewa, Roger Ireson, Art Gafke, Bob Kohler, and Jack Harnish. ~ photo courtesy Jack Harnish

The death of John Kurewa this week reminded me of another reason why I am and will remain a United Methodist. John was the first Vice-Chancellor of Africa University when it opened in 1992, the first United Methodist university in Africa.

I was a delegate to the 1988 General Conference when the conference unanimously approved the plan for the university and committed $2.5 million per year to make it happen. Ever since then, the United Methodist Church has provided millions of dollars every year through our General Church budget and our apportionment system.  Though millions of additional dollars have been raised through direct gifts from churches, annual conferences and individuals around the world, without that committed foundational support, it never would have been accomplished. Without the work of the General Board of Higher Education and Ministry and the General Board of Global Ministries which are supported by the World Service Fund apportionment, it never would have been possible.

I was the lucky guy who joined the GBHEM staff in 1993, just in time to share in the grand opening of the university, but the hard work of helping form the School of Theology had been done by my predecessor and the rest of that staff. When we gathered in Zimbabwe with the thousands of singing Africans and representatives from the global church, it was a time to celebrate not just the University, but the United Methodist connection which made it possible. And as we continued to develop the school, our salaries and our many trips to Zimbabwe were covered by the General Church budget. Africa University is only one of the many projects around the world that are supported through our apportionment system, projects which would not happen without it.

The proposals for the new “traditionalist” branch of the Methodist Church promise lower apportionments and less bureaucracy, getting rid of the agencies and superstructure of the United Methodist Church. So I wonder, how will you manage a global connection? Where will the funds come from to pay for the staff leadership to pull these things together? How will you pay for the administration of a church scattered around the world?

You don’t plant churches or build universities, schools, and hospitals with one-time gifts from local churches. It is only by the concerted effort of the whole church through something like the apportionment system that you can pull that off. The group leading the charge for the traditionalist branch is seeking to win over the African conferences, but have they calculated the millions of dollars that currently go to various projects in Africa? Where will that money come from?

There is a big difference between an association of local churches gathered around a common cause or political issue and a global church with the resources necessary to carry out its mission.

I realize that if and when this split happens, the remaining United Methodist Church will be smaller with fewer resources than it has today. There will need to be constraints and reductions to our large, hulking, sometimes cumbersome denomination. But even so, I would still rather be a part of this great connection we have built over the past 200 years than jump into a new, smaller denomination with no clear notion of how it will fund its broader ministry.

The life and death of John Kurewa and the success of Africa University reminds me of one more reason why I am and will remain a United Methodist.

~ Read more about the life and ministry of the Rev. John Wesley Z. Kurewa here.