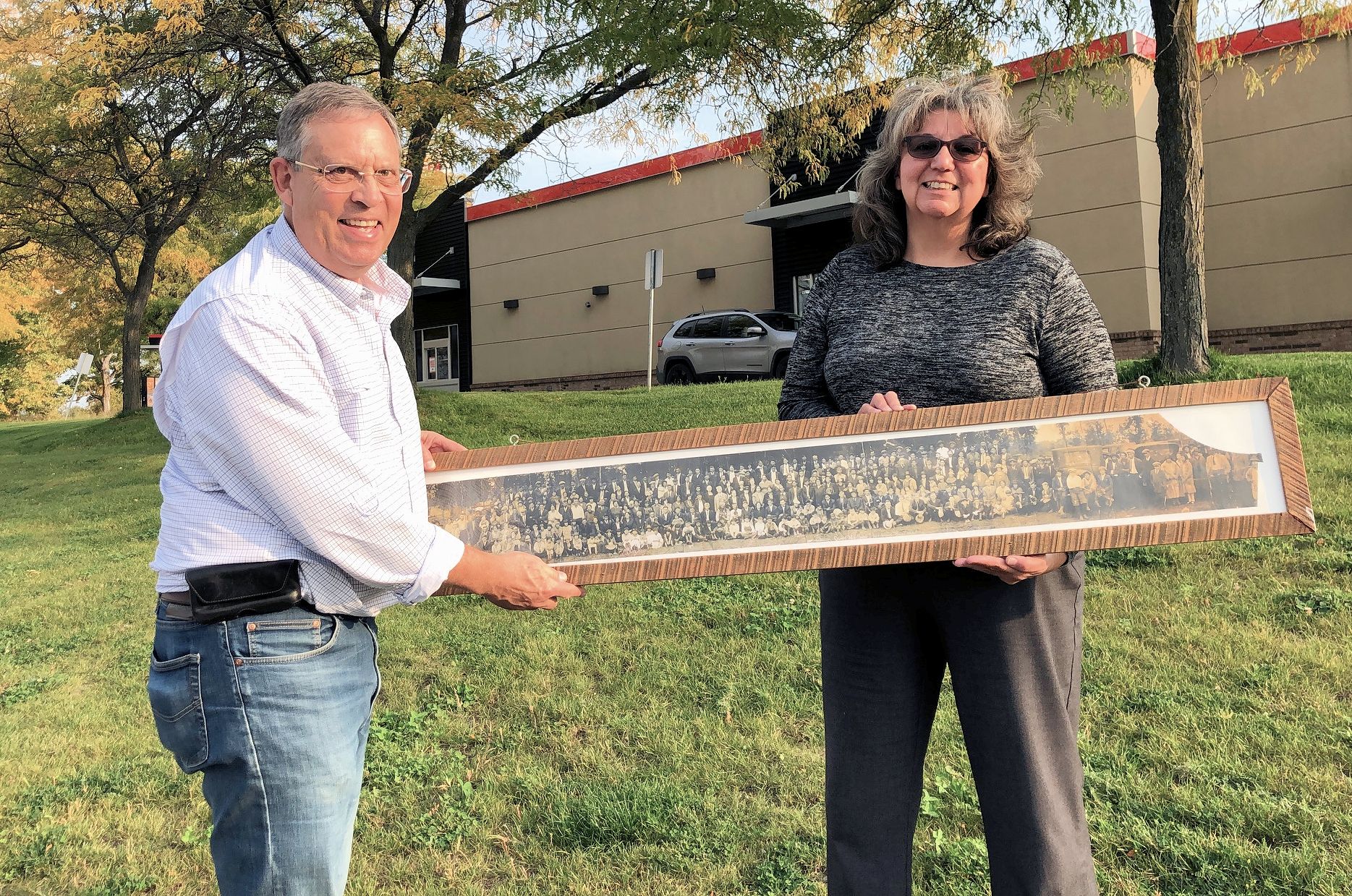 Amy Alberts joyfully accepts a photo from the Rev. Benton Heisler. The photo, taken in 1925, once hung in the former Saganing Indian Mission Church. It includes an image of her great-great-grandfather, Sodney. ~ photo courtesy Benton Heisler

The Plainfield Township Historical Commission in Hale, MI will soon have a copy of a photo of Sodney Mukkukoosh, a Native American resident revered in the early 20th century.

On February 27, 2020, the Rev. Benton Heisler posed a question mindful of the popular game show, Jeopardy. “It took 135 years and 25 minutes in this case,” Heisler said. “That is the answer to the question, ‘What does an Act of Repentance toward Reconciliation with indigenous people take?’”

Heisler referred to a gathering in Standish, MI, where 100 people came together in the former Saganing Indian Mission UMC last winter. United Methodist leaders, including Heisler and the Rev. Todd Williamson, chair of the Michigan Conference Committee on Native American Ministries (CONAM), were present with representatives of United Methodist Native American congregations from across the state to witness a historical event.

A ceremony, “Gratification Exchange,” marked the return of two acres of land to the Saginaw Chippewa Indian Tribe. The Methodist Church had held the ground since the 1870s. The Saganing church and cemetery sat on those two acres for nearly a century and a half until the church closed in January 2013. Then the Saganing Native American Center operated at the site in the years leading up to 2020.

These words of Bishop David Bard were read on February 27: “I am saddened that the long history of this church has come to an end. I am very pleased, however, that this property, which has such special significance, will continue to be used for the well-being of the Saginaw Chippewa Indian Tribe of Michigan.”

Here’s the rest of the story.

COVID-19 prompted shelter-in-place soon after persons went home from the ceremony in Standish. So, it was seven months later that Benton Heisler and Todd Williamson packed up the archives from the Saganing congregation and took them to the Ziibiwing Center of Anishinabe Culture & Lifeways in Mt. Pleasant, MI. The two men agreed that one of the items in that collection was to be gifted in a special way.

On September 25, a large photo of the Anishinabe congregation was carried by Heisler to Hale, MI, where it was given to Amy F. Alberts. The photo was taken in 1925 at the Rosebush Camp Meeting. Amy chaired CONAM at the time the Saganing property transitioned from church to Native American center six years ago. Though The Michigan Conference is grateful for her leadership, that was not the reason Amy was receiving the photograph. “Her family has deep roots in the Saganing church and the region,” Heisler explained.

In the center of the congregation, in full Native American regalia, sits Amy’s great-great-grandfather, Sodney (Mukkukoosh on his headstone; Mukluakcush on the death certificate; Muccakush in records of the Bureau of Indian Affairs). He was active in the Methodist Church of his day. Born in Michigan in 1862, Sodney is buried in the Esmond Evergreen Cemetery in Hale. For decades, the photograph hung on the wall in the sanctuary of Saganing Indian Mission UMC.

“It is like getting gold!” Amy says with joy. “I am happy and thrilled to receive the photograph!” She recalls that Sodney raised her grandfather, Louis Williams, who lived in Hale. “Sodney came to the area and purchased property in Plainfield Township around 1915. He passed away in 1929.” The photo at the Rosebush Camp Meeting was taken four years before his death.

Amy adds that her ancestral ties go to Ogemaw, Iosco, and Saginaw counties, as well. She reports that before coming to Hale, Sodney lived in a cabin on Dease Lake. The cabin was looked upon as a meeting place for school and church. In addition to his involvement at the Saganing church, Sodney’s parents’ — John and Mrs. Mukaukaush — names appear in the records of the Oscoda Indian Mission Church. “He had ties with both,” Amy notes. “Our people stayed connected like that. Now many are connected with just one church, but our people were connected through all of our churches.” Today, Amy is a member of Hale UMC and an Associate Member of Oscoda Indian Mission UMC.

Amy F. Alberts is interested in the family ties to the man in the photo, but she also has an eye to history. She serves on the Plainfield Township Historical Commission. Amy provides perspective on Sodney’s heritage. An entry in the records of the U.S. Bureau of Indian Affairs dated 1988, mentions a grant  to Sodney’s daughter, Eliza, along with the notation that her ancestor, Muk kah kush, was a signer of the 1837, 1838, and 1839 Treaties between the government and the Saginaw Chippewa Indians.*

Amy and her colleagues on the commission are eager to begin research of the photograph. “I want to see the photograph shared here, where Sodney lived,” she says, “He was a revered resident of this community.”

She comments further on the image. “Sodney is the only one dressed traditionally. There was a lot of transition going on in the 1920s.” Sodney’s great-great-granddaughter reflects, “There is a message in this picture, but we are yet to figure out why the photo was taken. It is a huge photograph. Look at the faces of people. Most are not smiling. There must have been something else going on at that time.”

Amy is confident that the Historical Commission will “uncover and discover more through research, now that we have this photo.” One of her colleagues on the commission suggested looking for more information by tracing the photographer. There is much to be learned.

Amy intends to share copies of the photograph with the Oscoda Indian Mission in Iosco County and the Plainfield Township Historical Commission for display in Hale. “All of our people are connected by the grace of God,” Amy states. “It is an honor to be Sodney’s descendent and to have his legacy to live up to!”

Churches may close, but our memories carry the blessings of God forward through the ages.