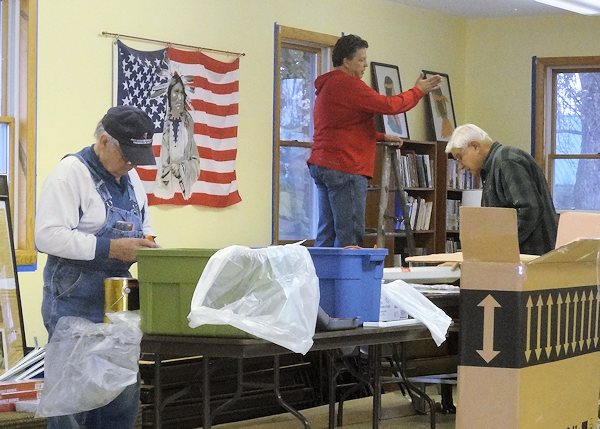 Happy are those whose help is the God of Jacob, whose hope is in the Lord their God, who made heaven and earth, the sea, and all that is in them; who keeps faith forever.” — Psalm 146:5-6, NRSV

Aligned with those words in Psalm 146, the Dakota Tribe preaches, “We will be known forever by the tracks we leave behind.”

Members of the Committee on Native American Ministries of the Detroit Conference are making tracks in Standish, Michigan. Two years ago CONAM, when there was no worshipping congregation left at the church, began establishment of the Saganing Native American Center on the site.

Today CONAM member, Kathy Smith, reports on what has developed over the past 24 months. Good news was just received from Chebon Kernell, the Executive Secretary of Native American & Indigenous Ministries, Justice & Discipleship of the General Board of Global Ministries. The Saganing Center has received a $10,000 grant that will be used to put new windows in the sanctuary. “The building was constructed in 1875,” Kathy says, “so leaks happen!” The grant will cover most of the cost and volunteers from Leighton United Methodist Church and the United Methodist Men of the Detroit Renaissance District have been supplying labor…replacing lights, painting, varnishing window frames and installing blinds.

There is a new sign out front which will be dedicated on Memorial Day in 2016. Kathy says the sign honors a young man, Wade Libbrecht, who served as the groundskeeper at Saganing, before his tragic death at age 24.

While a lot has gone on with the building, much has also gone on with people. The NA Center hosted its 2nd Annual Back to School Bonanza in August, distributing 213 backpacks to children in grades K-12. Another 150 children received free clothing thanks to CONAM member, Rose Bledsoe, who procured the gifts through Arenac County.

Rose also runs a Weekly Diaper Pantry at the Center, 12 pm-3 pm every Monday. In addition to free diapers, there are personal hygiene and cleaning products distributed supported by the Detroit Annual Conference. The Saganing Native American Center is officially closed during the winter; in fact the heat will be turned off on November 9. But, according to Kathy, “Rose will come in with her space heater and the Diaper Pantry continues through the winter.”

So what will be happening when the Center reopens next April? In June of 2016 the Saganing Band of the Saginaw Chippewa Tribe will hold their annual Pow Wow in Standish. “We will be hosting a brunch for the dignitaries who attend the Pow Wow,” Kathy notes. “We will also have the building open with historical displays and Native American Art.” Other summer events … a Lay Servant Class with a focus on Native American tradition in July and the 3rd Annual Back to School Bonanza the last Saturday in August. Kathy is most excited about CONAM member Clara Lawrence’s plan to spend the entire summer in Standish in order to provide children’s programs at the Center.

When asked “What gives you joy,” Kathy doubtless speaks for others in CONAM: “Developing a whole new much-needed ministry in mid-Michigan. We all just want to help in some way.”

And that’s the kind of Spirit that makes tracks that last.

Let’s celebrate Native American Heritage Month wholeheartedly, with our neighbors in Standish and the more than 158 Native American United Methodist churches making “tracks” throughout the United States. Click here for resources that will support that effort.