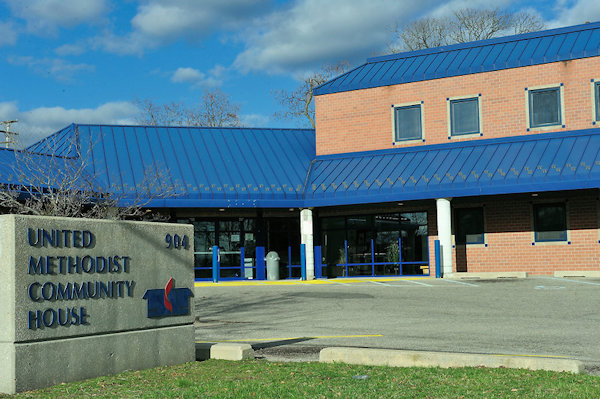 A first step has been taken to unite the United Methodist Women (UMW) of the Michigan Area.

United Methodist Community House (UMCH) in Grand Rapids is a National Mission Institution through the United Methodist Women national.  It is one of nearly 100 such institutions across the nation.  Several Conference UMW officers sit on the UMCH  Board of Directors.  Various agencies contribute monies toward the programs of UMCH, but the West Michigan UMW is responsible for the maintenance. As plans move forward for the creation of a new conference in Michigan, it follows that, eventually, the Michigan Area United Methodist Women would be the owners.

Kroeze requested help in financing some much needed repairs at “The Methodist,” as the building is known in the neighborhood.  A small group from West Michigan and Detroit United Methodist Women met and discussed the request.  The Mission team of the Detroit UMC was then consulted.

Earlier, at the 2014 West Michigan UMW District Annual Meetings, Kroeze had launched a campaign to raise money needed for a new roof for the main House.  The roof was paid for by Christmas 2014! At the September 2015 West Michigan District Annual meetings, she presented the current list of projects that were needed to bring the Community House to a manageable annual maintenance schedule.

At their Executive Committee meeting last month, the Detroit UMW voted to give an immediate donation to the maintenance fund.  They also voted to make presentations at their October District Annual Meetings about the needs of the United Methodist Community House and urge local women and local groups to donate money to the maintenance fund.  In addition both Conference United Methodist Women have put a UMCH maintenance line item in their 2016 budgets.

The most urgent need is the repair of the entry-way canopy.  It was not part of the roof repair and has dry rot under its metal roofing.  It could damage the new roof if not repaired.  In heavy rain the water comes inside.  In the winter there is a lot of ice build up and icy sidewalks.

Detroit has challenged their United Methodist Women to make immediate gifts to repair the canopy.  The original amount to repair is $48,000; after the conference donation, some private donations, and offerings at Detroit District and Conference Annual Meetings  approximately $41,165 is still needed.  Any giving beyond that amount will go toward the next most urgent need.  Detroit urges their local units to give at least $4 a member to reach the goal.  Monies should be sent to their United Methodist Women district treasurers.