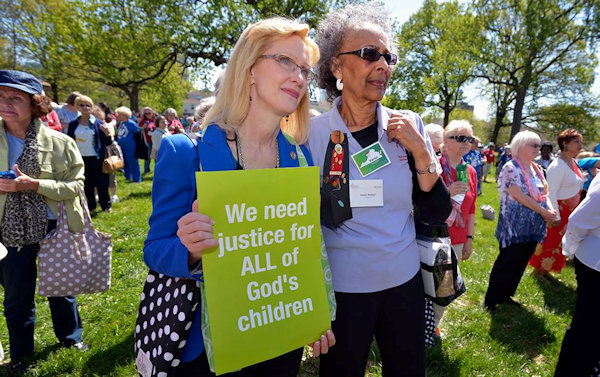 United Methodist Women Speaks Out Against Extrajudicial Killings of People of Color and Vigilante Killing of Police in July 2016. ~UMW Facebook/Paul Jeffrey

Diane Johnson grew up in Detroit during the civil rights era. She now supports young activists.

On the day Michael Brown was shot, Saturday, August 9, 2014, my daughter, Tammie Holland, and I were at a Ferguson drive-in restaurant purchasing sodas. Tammie received a post on social media stating that the police had just shot someone around the corner. I had the sense that something terrible had happened and wanted to go see, but Tammie was hesitant. I was able to convince her that we needed to witness what was causing hundreds of people to surround the area.

We had to walk a distance to get past a roped off area to stand blocks from the crime scene. With us was Michael Brown’s mother, Lezley McSpadden. As hundreds of people continued to gather, militarized police moved in with armored military trucks. Hours later the street was reopened and we were allowed to enter the crime scene area. We watched as Michael Brown’s blood was washed away from the streets. We had stood for hours, witness to this travesty of justice, as his body had lain in the street for four hours.

The day of his death marked the first day of many when people, including myself, took to the streets to demand justice for his death. We kept coming back to protest, for four months. After a few weeks I became involved in the Black Lives Matter movement. Vincent Flewellen, an adjunct university professor, took my cell phone number and Black Lives Matter organizers started sending me text messages with the details of the next actions (the movement calls them actions rather than protests). Protesting, or taking part in an action, felt natural to me because I have never stood idly by when I see injustice. I will run toward a demonstration rather than away from one because that is how I was brought up.

Growing up during the civil rights era, I had the chance to see both worlds—segregated and desegregated. I was raised in Detroit, but spent summers with my relatives in Birmingham, Alabama. I sat in the back of the bus (prior to the bus boycotts). We did not ride the bus during the boycotts, and I was proud to walk for the cause. I learned what it felt like to go to the “colored” bathroom and drink from the “colored only” water fountain. However, the daredevil in me had to challenge the system. Much to my aunt’s consternation, I was bold and defiant and drank from the “white only” fountain when I thought the water from the “colored only” fountain was too warm.

I believe some from the older generations who were part of the 60s civil rights era have forgotten their roots in civil disobedience. Instead of inviting young people to be a part of planning, they speak from podiums and give grand introductions, tout lengthy titles and positions held. Many are resentful and critical of younger activists. They believe the news media portrayal of Black Lives Matter instead of getting to know who these young people are.

I want my generation to take my approach and be an ally, and step back to let the youth lead. I understand if some of us are not able to get involved at the street level, but there are other ways we can be involved in seeking justice with our young people. We can be in conversation with one another, and at the church level we can invite members of Black Lives Matter to come speak to us. We can gather in small focus groups and talk about the social justice issues most pressing to us, young and old. These conversations may be difficult, but we need to be patient with one another and remember that our young people in this movement want us to understand their experiences and hear their stories and ideas. They are tired of us ignoring them; I am too.

I can listen to our young people and support them with my activism. I can gently prod, as I did with my own daughter, to use the platform best suited for them as a tool for justice. Tammie interviewed Michael Brown’s mother the day we stood with her. Tammie shared Lezley’s truth about her son’s shooting death on her prime-time iHeartRadio show “100.3 The Beat – Tammie Holland in the Morning.” Her tweet from that day was reposted over 4,600 times and “liked” by more than 10,000 people, including Russell Simmons.

I can also guide young activists by following Martin Luther King Jr.’s example. He spoke kindly to his oppressor. On one of the hottest days of the Michael Brown protests, I had a conversation with the very police we were protesting against. I told them how nice it would be to have cooling buses following the protesters so we could relieve ourselves of the heat. At the very next march, there were cooling buses for us.

If we all work together we can make lasting change happen, as we follow in the footsteps of the brave activists before us.