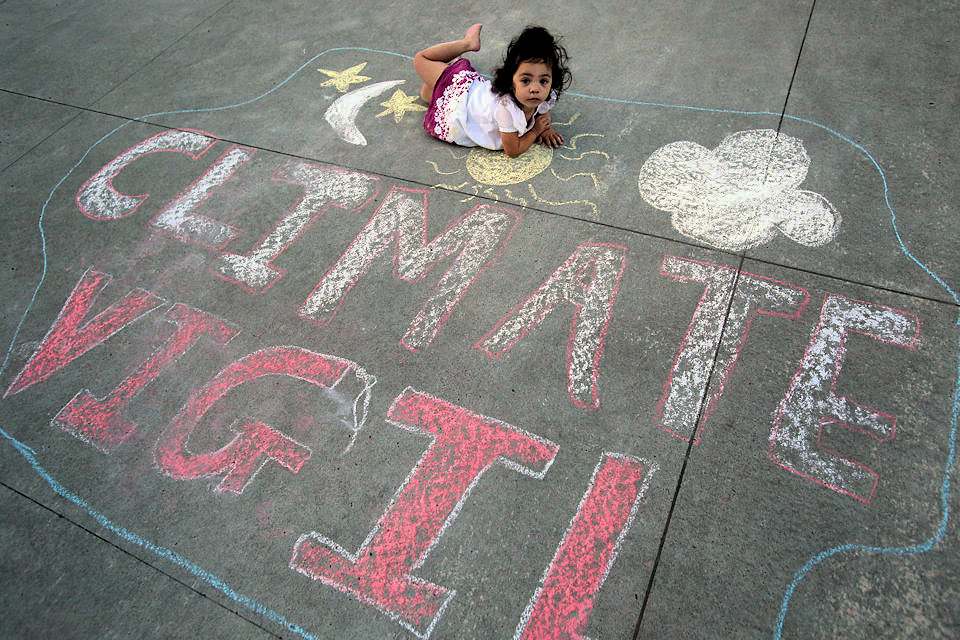 With the global headlines currently focused on the Climate Strike, the Rev. Jerry DeVine looks to his own back yard to consider the responsibility all Christians have for creation care.

Like most clergy, I have lived in a variety of parsonages throughout my career, as well as in homes we owned. In every place, we intentionally planted trees and bushes as a means of helping clean the air and bring delight to birds and other small creatures. The trees also brought visual joy to us in their graceful strength and beauty.

Sadly, as I write this blog, we are waiting for a tree removal crew to begin taking down a wonderful old elm tree in our back yard. The tree is precariously close to our neighbor’s house and is diseased. For our neighbor’s safety, as well as ours, the tree has to be cut down. We are grateful for the shade it has provided, the shelter it has given to many squirrels and birds, and the role it has played in absorbing that which we cannot breathe and bestowing the oxygen upon us we must have to exist. We hope to plant both a dogwood tree and a serviceberry tree in its place. They will not be able to do the mammoth work of that old 80-foot elm, but it will at least be a start. I feel a sense of relationship and responsibility for the actions that I take that impact the earth. I also confess that I am not as good at this as I need to be.

Some of you may have been following the news around the recent Climate Strike.

I will not be reflecting on the details of that movement. Rather, I would invite us to consider why Christians should care about creation care. What if those of us who are a part of the Christian faith considered creation care as a form of Christian discipleship rooted in biblical heritage and spiritual identity?

I was recently asked by one of the pastors on my district to preach on “God’s creation and spirituality”, with a particular focus coming out of my relationship to and appreciation of Native American Indian cultures, traditions, and worldview. The two texts that quickly came to mind for me were Genesis 1:1-31 and John 1:1-5, 14.  The images in Genesis 1 are so rich and vivid, and so connected. I love where the writer poetically says, “God saw everything that God had made, and indeed, it was very good.” God was not just happy about the two-legged ones called human beings. However, it is rather clear that God, our Creator, saw potential in human beings to take on some responsibility.

There is one word that gets troublesome in translation from Hebrew into English. What does it really mean that God gave human beings “dominion” over this wondrous creation? In the dominant historical European/western practice and mindset that has often led to “domination” and subjugation. However, is that really what the Hebrew word for it means? The original Hebrew speaks of a “care-giving and nurturing” role rather than “exploitation.” One commentary suggests that God gives the opportunity to the human community to “bring the world along to its fullest possible creational potential.” Wow! God wants to trust you and me to help bring the wonderful elements of creation to their best. If that is the case, then we have some serious work to do.

Our United Methodist Social Principles, in our Book of Discipline, remind us:

“All creation is the Lord’s, and we are responsible for the ways in which we use and abuse it.  Water, air, soil, minerals, energy resources, plants, animal life, and space are to be valued and conserved because they are God’s creation and not solely because they are useful to human beings.  God has granted us stewardship of creation.”

In the Lakota language and culture, there is a greeting that is spoken during prayers and ceremonies that embodies what I hope you will remember:  Aho Mitakuye Oyasin … I greet all my relations.

I have heard and read Lakota elders describing this value and worldview in this way:

“To most of us today, relative means a blood relation or another human in the family lineage. We have not been taught that an entity, other than human, could be a relative. Understanding this simple statement and contemplating it, could change your outlook on life forever. If you love and honor your relatives, you would be loving and honoring most of what is on this earth, if you live by this meaning of ‘relative.’ What a different world we would be living in!”

The Gospel of John reminds us in Chapter 1 that the one we came to know as Jesus the Christ was and is also the Creator who hovered over the chaotic waters at the beginning of creation. If this wondrous God chose to become incarnate and walk among us in the person of Jesus, then it reveals to us that God loves this earthly existence that we share. The creation story in Genesis weaves such a wonderful tapestry of the evolving of life, and how the very creative thought of God, when spoken aloud, brought things forth. God said “Let there be,” and indeed it came to be. The Gospel of John said that same creative Word, that was the source of the birthing of creation then “became flesh and lived among us.” God’s love for creation and God’s love for humankind are interwoven and inseparable.

The news of the past month or so has been filled with some deeply concerning signs of our impact on God’s creation. From the rapid melting of glaciers to the massive burning in the Amazon rain forest, we are in a time of heightened concern. French President Emmanuel Macron tweeted in late August: “Our house is burning. Literally. The Amazon rain forest–the lungs which produce 20% of our planet’s oxygen–is on fire. It is an international crisis.”

If one affirms that God expects us to be better stewards and caregivers of God’s creation, then to act in direct opposition and resistance to that would be deemed a sin against God and God’s beloved creation. And, for leaders of any nation, region, or corporation to absent themselves from that care would be a participation in that sin. It is both individual and systemic sin.

Several months ago I preached at one of our small rural town churches. I stayed for conversation and refreshments following the service. I had not met these folks before and was not sure what their worldviews might be. As I often do, I sat at an open table and waited to see who might join me. Two older men came over with their refreshments and sat down and began a conversation. I asked them each what they did when they were not sitting down at a table with a district superintendent. That usually sets folks at ease. I discovered that both were involved in agriculture.

I grew up farming so we had a common topic to build relationships. What fascinated me as the conversation deepened is that they are both large scale organic farmers. One is in dairy and the other in grain crops. The grain farmer shared why he switched from the usual chemically-based crop control to organic. The pesticides and herbicides he had used decades before had begun to attach his nervous system. It took some time to learn a new way but for the past 20 years he has been farming organically.

The story gets even better though. I spoke with their pastor recently and now these two men are working exploring a collaboration with some leaders in the Methodist Church in Haiti to provide training in sustainable organic farming methods for small farm operations in Haiti. They are living out their discipleship through what they know how to do. They understand their relationship with God and God’s creation.