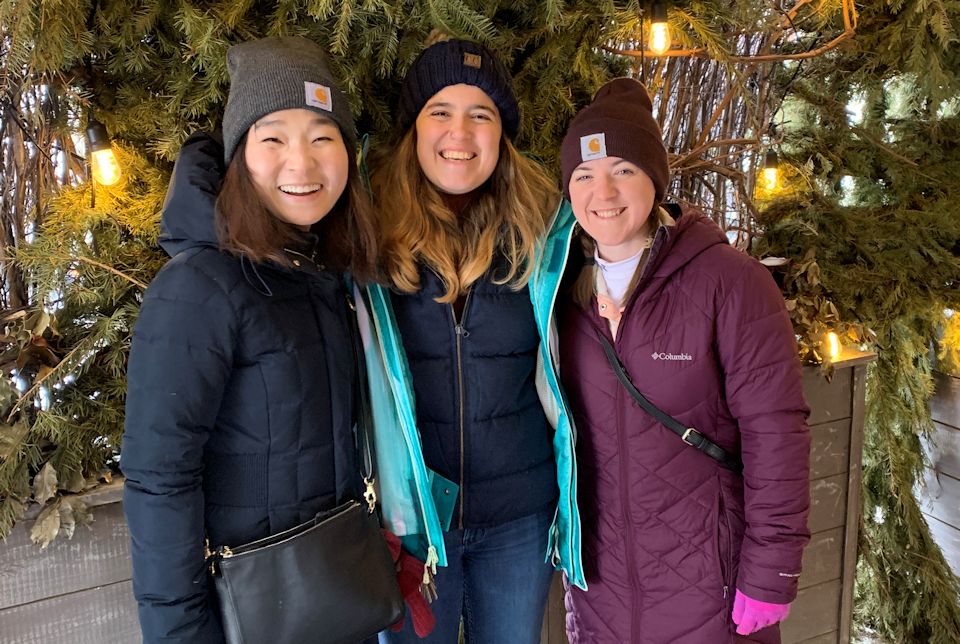 Jinnia Siironen thought she didn’t want to be placed in Michigan for her Global Mission Fellows program because the North Carolina native thought it was too cold – literally and figuratively. But after 18 months working at the NOAH Project in Detroit, she’s fallen in love.

“Detroit does something to you – I’m not sure how to describe it,” Siironen said. “The city itself and the people of the city make Detroit feel very welcoming. I’ve grown a lot personally, internally and externally. I attribute that to Detroit.”

“Then in December 2019, I transitioned into the lunch and volunteer coordinator. I love it,” said Sirronen, who holds a culinary arts degree. “It has been cool to partner with the local food bank to try to introduce fresh produce to our clients. I think those living on the streets are given so many processed and unhealthy foods; it is cool to incorporate fresh produce into their meals. Seeing the joy on their faces when they get fresh food (is priceless).”

The United Methodist Church Global Mission Fellows program places young adults ages 20-30 in new contexts for mission experience and service. The program has a strong emphasis on faith and justice. The first US-2 in Michigan served in campus ministry in Mt. Pleasant in the early 1970s.

Lisa Batten, the Michigan Conference young adult initiatives coordinator, connects with the Global Fellows after they are placed in Michigan ministries. “The first US-2 placed to serve in the city of Detroit (was) at Central UMC with the NOAH Project (in 1999),” Batten said. “Since then, Michigan has been the home to more than 40 young adults who have served.”

Yeo Jin Yun came from New Jersey to assist the Methodist Federation for Social Action (MFSA) with database work, office organization, and chapter connections. With long-term plans to attend law school, she has degrees in peace and conflict studies and ethnic and area studies, with a concentration in Asian studies.

“I’ve always been interested in justice issues,” Yun said. “Growing up as a 1.5 generation immigrant (from South Korea at age 5), I always was in-between cultures and generations. It was a juggling act to find my identity, and the conflict between North and South Korea always was on my mind. In college, I connected that peace issues and faith were connected. So then I knew I wanted to be doing faith-based work.”

“Doing this non-profit work has been a big joy,” she said. “And now, I will have these transferable skills for whatever is next. Plus, it is exciting that my work is vital to the health of MFSA. My work matters.”

Lauren Norton’s US-2 path to Detroit first began in Alaska, where she was placed for four months before the General Board of Global Ministries ended the placement. This meant the shy, reserved Georgia native would have to learn a new location again.

“The back-to-back placements taught me to overcome the fear of the unknown,” Norton said. “I’ve been welcomed into these Christ-like communities, seeing Jesus in so many people. So many have reached out to me – from conference staff or other US-2s or churches. I’ve been so welcomed and loved. It has encouraged me to look forward to the fall when I can welcome the next US-2s”

Norton has a multi-ministry placement. She is the outreach coordinator at Motown Mission, organizing schedules and communicating with project partners about spring break and summer group mission trips to Detroit. She also works one day a week at Detroit Central UMC as a children’s and youth assistant. Additional hours are spent as the outreach coordinator for Motor City Wesley.

A first-generation college graduate, in early childhood education, Norton says she likes the people interaction of her jobs. “All my life, I’ve always been around kids. So being in an outreach position away from kids is completely different to me. I’m also learning what the project partners are doing in the city and the impact it has on the city of Detroit.”

With many current denominational struggles in the United Methodist Church, the three US-2s are not deterred, but rather even more focused on their work in the streets.

“Working at NOAH can be really hard in the sense of learning of injustices that continue to happen,” Siironen said. “You are going to see people falling through the cracks constantly. For me, that’s really hard to hear. Especially being in Michigan where it can get so cold, and some individuals are out on the streets. I see gentrification happening all the time – bringing the rich into areas to help re-build, but it pushes out the marginalized. There are so many on the street who could benefit from getting housing; then, they could get back up on their feet. If they struggle with mental health issues, then they could get treatment.”

Yun sees similar issues. “I think there is huge work to be done,” Yun said. “We’re still moving forward despite the uncertainties of the denomination. I’m holding onto faith that God would place me where God sees fit. I think sometimes we limit what we can see – I hold to hope, and God knows best.”

Ministry sites can host subsequent US-2 placements. Yun said she appreciated being able to have flexibility in her responsibilities.

“I like the flexibility of curating the position with the specific individuals,” she said. “It is important for a ministry to make their needs specific at the beginning. MFSA had a clear job description and expectations. Specify what is non-negotiable but have some flexibility to work with the individual.  There is a creative side to this position. We’re revamping a program, and it is exciting for me.”

Not everything about the two-year assignments is fun and exciting, however. Sometimes the out-of-state placements can be a challenge. Norton noted it was scary to learn about her placement as she didn’t have any control as to where she’d be assigned. Yun said that being away from family and friends for the first time has been at times difficult. But all three women have found strength from one another.

“We all live in the Foundry House,” Sirronen said. “It is a four-plex; two used for US-2s. It is owned through Motown Mission. Fellows have been living there for three or four years.”

Norton added that she loves living at the Foundry House. “I find it is a good way to connect with the other US-2s. We have movie nights and we hang-out a lot together. It is the fun part of being a GMF in Detroit.”

In addition to developing employment and relationship skills, they say growth in their faith has been evident as well.

“I wish I would have realized going in how much being a Global Mission Fellow would mean to me,” Norton said. “When I first entered, I thought I was being called to be in mission. But as I grow, I realize how important the work is.

“When I let my service as a GMF be rooted in (prayer) rather than my own ability, I let go of fear a little more, and I get to embrace that braveness and strength that comes from truly knowing that it is for the Lord. I get cool experiences and meet incredible people, but it’s about God’s kingdom and not about me.”

Sirronen’s love for the city may further develop as she has been offered a position to remain with the NOAH Project after her assignment concludes this summer. “I have never been a planner. I go with the flow and trust the Lord. I know that no matter what, the Lord still will be there. I’ve also believed that Jesus is greater than religion. Being a follower of Christ allows us to come as we are. Jesus will still beckon us to come.”