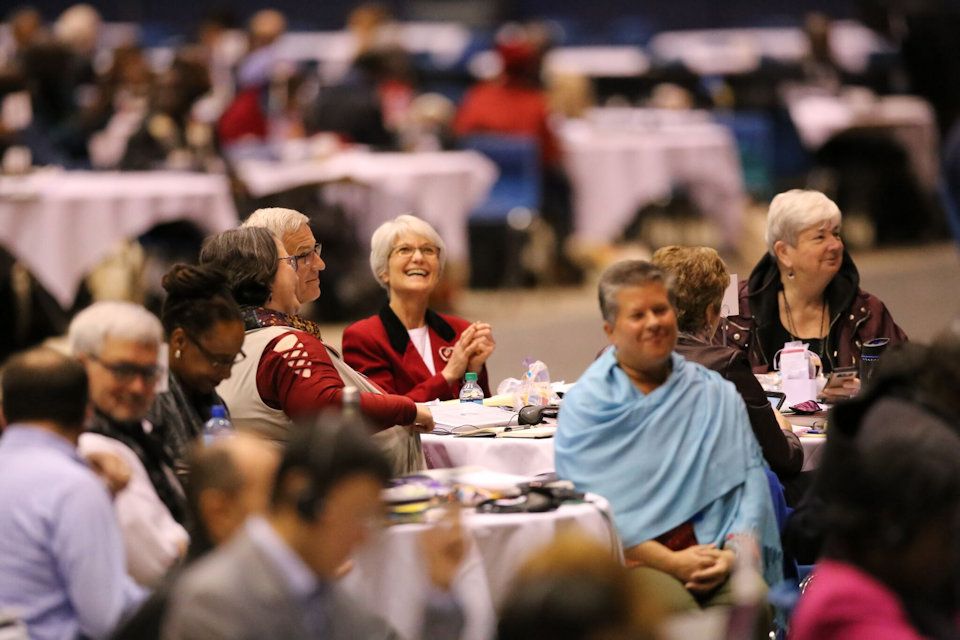 Part of the 2016 Michigan Conference delegation serving a second time in 2019. When they and others left St. Louis, they believed the next session of General Conference would take place 15 months later, in May of 2020. ~ mic photo/Mark Doyal

Availability of vaccines, internet connection, and visas are all some of the unknowns that continue to complicate the plan for the General Conference set to convene eight months from now.

Organizers have yet to determine whether the pandemic-postponed General Conference can go forward as planned on Aug. 29-Sept. 7 in Minneapolis.

In the meantime, the Commission on the General Conference has decided not to reopen the usual process for accepting petitions — that is, proposed legislation — to The United Methodist Church’s top lawmaking body.

That could have implications for General Conference delegates’ ability to have access to some big legislative proposals — including one outlining a potential denominational split — ahead of the assembly.

The Discipline also allows annual conferences to submit legislation if they meet between 230 and 45 days before General Conference.

However, the commission said in a press release that any petitions submitted after the original deadlines for what would have been the 2020 General Conference would be treated as late legislation.

“The commission has remained consistent with the understanding of postponement as opposed to cancellation,” commission leaders said in an emailed statement to United Methodist News. “Under postponement, the General Conference petition process is ongoing.”

Bottom line: The commission has no plan to publish another print edition of the Advance Daily Christian Advocate, which contains the petitions heading to General Conference.

A year ago, the commission determined that the reference committee would also make final decisions about handling petitions submitted by annual conferences in 2020.

That legislation includes the proposed Protocol of Reconciliation & Grace Through Separation, a mediated agreement that seeks to resolve the longtime United Methodist debate over homosexuality through a denominational split. The process of separation outlined in the protocol needs revision to accommodate the delay in General Conference.

Also affected would be the Christmas Covenant, the first major legislative package submitted by delegates from the central conferences — church regions in Africa, Europe, and the Philippines. The legislation, which takes its name from the 1784 Christmas Conference that initially formed what became The United Methodist Church, aims to establish regional equity within the denomination.

The Alaska Conference also submitted legislation that would discontinue its missionary conference status and open the door to become a missionary district of the Pacific Northwest Conference.

The printed Advance Daily Christian Advocate contains proposals submitted to General Conference months before the protocol, Christmas Covenant, or Alaska petitions were drafted and before COVID-19 forced the postponement of the legislative gathering.

“The commission will be utilizing the online DCA (Daily Christian Advocate) and other available ways of releasing valid petitions,” the leaders told UM News in the emailed statement.

Commission leaders added that they recognize that “there may well be the need for additional petitions to be submitted due to the change of circumstances since the original deadlines passed.” The reference committee is up to the task of processing these additions, the commission said.

The General Conference commission decided about legislation and other aspects of the plan in a Dec. 11-12 online meeting, most of which was closed to the press.

The Discipline also says: “A report on the results of a closed session shall be made immediately upon its conclusion or as soon thereafter as is practicable.” The commission reported its decisions in a press release published the afternoon of Dec. 18 — six days after the meeting’s conclusion.

Because of COVID-19, visa restrictions, and the slow rollout of vaccines, big questions remain about whether the 10-day General Conference can go forward safely as scheduled. The commission wrestled with most of those issues behind closed doors.

In October, the commission named a technology study team to look at ways to accommodate full participation of nearly 900 voting delegates and other church leaders who come from four continents and multiple time zones. Among the possibilities is seeing if General Conference can do its work, at least in part, online.

Complicating matters are continuing questions — unrelated to COVID-19 restrictions — of whether many delegates can travel to the United States. One big concern is a visa pilot program the Trump administration initiated that requires travelers from two dozen countries, mostly in Africa, to pay as much as $15,000 in bonds to visit the United States.

Among the countries affected are Angola, Burundi, Congo, and Liberia, which combined plan to send 164 delegates to the coming General Conference. Congo, in particular, is seeing some of the most rapid growth in the denomination.

The visa bond pilot program started Dec. 24 and is scheduled to end June 24, but commission members remain uncertain whether it will be extended.

Commission members also are pondering the availability of COVID-19 vaccines around the globe.

Even while weighing these concerns, the commission press release said the group is looking at a plan that maintains the integrity of the General Conference credentialing. The commission previously determined that at the contentious special 2019 General Conference, four ineligible people cast votes using delegates’ credentials who were not present.

“We realize that time is of the essence. However, the reality is that there are parts of the Book of Discipline that do not speak to the issues raised during a pandemic,” said Kim Simpson, the commission’s chair, in the press release.

“There are still a lot of unknown factors, and we will have to make a best-informed decision with what we have and trust God to guide us to do the best we can for The United Methodist Church.”