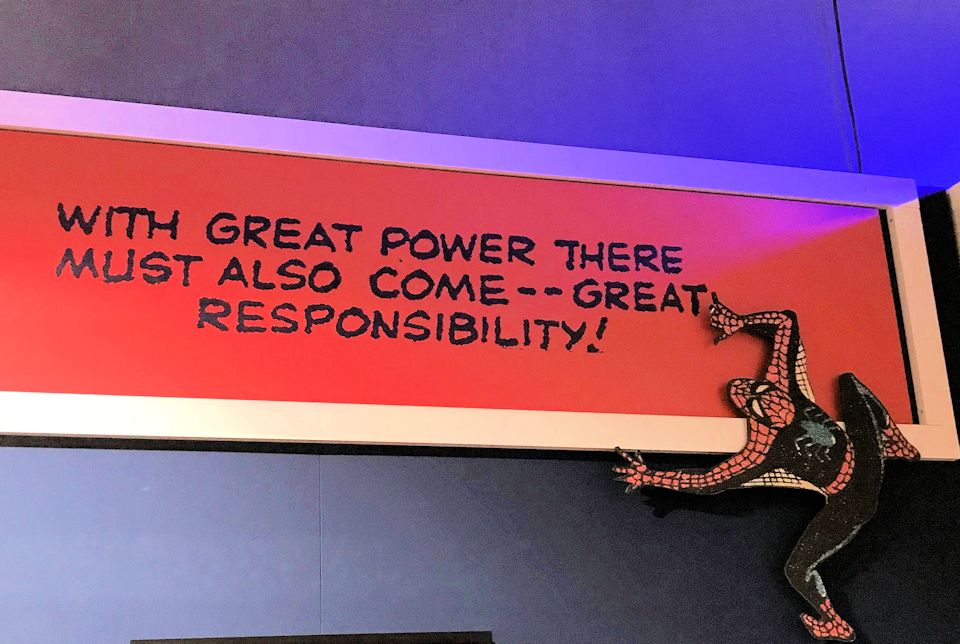 The Rev. Paul Perez shares how his love of the gospel and science fiction came together last week during an exhibit of Marvel: Universe of Superheroes. He was reminded of some truths about power.

This past weekend, I visited the “Marvel: Universe of Superheroes” traveling exhibit at the Henry Ford Museum of American Innovation in Dearborn, MI.

Masked, observing appropriate social distancing, and part of a limited capacity group, I had a chance to geek out on the Marvel Comics #1 featuring the Human Torch & Submariner, original art from the Uncanny X-Men #1, and a host of costumes and props from the Marvel Cinematic Universe’s films and TV shows. I even snapped a picture of myself with The Black Panther.

Displayed in the Spider-Man section was this now-classic quote: “With great power, there must also come — great responsibility!” What a quote to encounter after the heartbreaking events at the nation’s capitol last week.

The quote is central to the character of Spider-Man, who did not originally use his powers for the common good but personal gain. All that changed when his Uncle Ben was murdered by a criminal he could have stopped earlier in the day. Spider-Man learned, in a tragic way, the responsibility that came with his powers.

I love science fiction and fantasy because its outlandish, otherworldly premises can, at its best, provide us imaginative space to explore what it means to be human. In the case of Spider-Man, what does it mean when great power is put in the hands of Peter Parker, an ordinary teenager from Queens. In my experience, we are innately aware of the power dynamics flowing around and through us but rarely do we step back and take the time to analyze those dynamics.

The comic book hero Spider-Man, in a creative and entertaining way, encourages us to undertake a power analysis, asking: “What power do I have? Do I use that power for myself or others? And, How others’ use of power impact my and others’ lives?” In the gospels, Jesus raises similar questions and invites us to share in the power of God’s love. In another blog, I described that power as seeking, forgiving, healing, and liberating. Jesus shows us a way of power that is persuasive, not coercive, for others and not for self-gain, confronts the destructive “powers and principalities,” and is shared and mutual as opposed to controlling and domineering.

What we witnessed last week in the nation’s capitol was an abuse of power for personal gain by the president and his supporters. I encourage you to read this statement from the National Council of Churches and join me in adding your name to the list of signatories.

While this was the misuse of power on a large scale, the reality is we witness such abuses and misuses on a smaller scale all around us, every day. Do we recognize them? Are we willing to confront them? Do we have the courage and imagination about how power could be used in different, more life-giving ways?

In Acts 1:8, Jesus’ disciples are given the power of the Holy Spirit to continue his mission and ministry in the world. The lead character of the animated film Into the Spider-Verse is Miles Morales. Miles unexpectedly finds himself with the mantle and powers of Spider-Man, and says this:

“I never thought I’d be able to do any of this stuff. But I can. Anyone can wear the mask. You can wear the mask. If you didn’t know that before, I hope you do now. Cuz I’m Spider-Man. And I’m not the only one. Not by a long shot.”

As Christians, we carry the mantle and power of Jesus and share in the awesome power of God’s love.

“With great power, there must also come — great responsibility!”