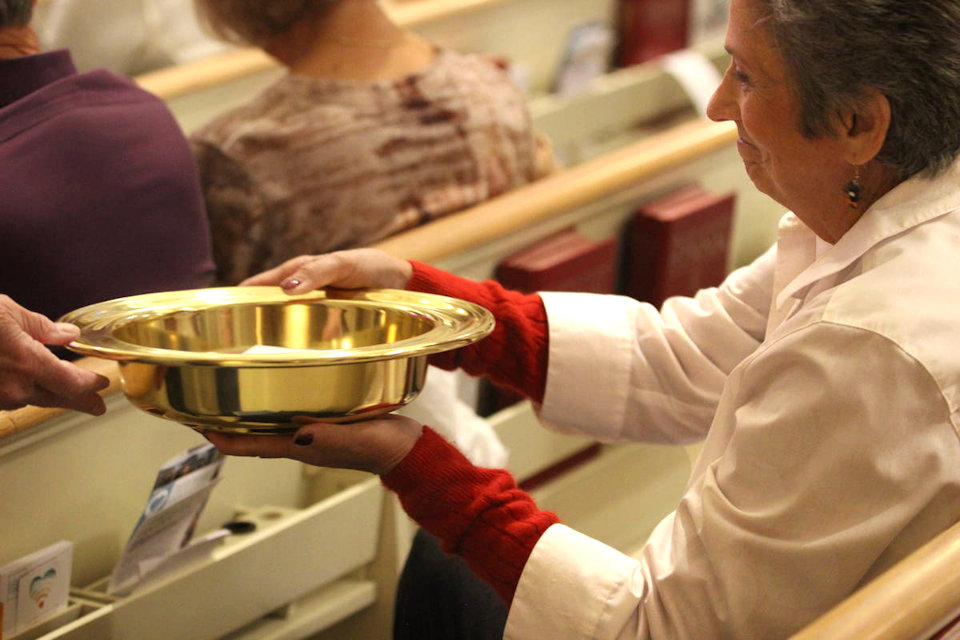 The familiar act of passing the offering plate is not happening in churches across the denomination. This, coupled with the possibility of a split in the denomination, deepens financial uncertaintly for the UMC.

Though dispirited following the 2019 General Conference, the people of The United Methodist Church rallied in giving to denomination-wide ministries.

The good news about United Methodist giving in 2019 is that the news was not all bad.

Immediately after the contentious special General Conference, giving to general church ministries plummeted. The denomination’s finance agency raised alarms in May that if trends continued, the apportionment collections rate would be in the 70% range — well below what was seen during the 2008-2010 global recession.

By the end of 2019, the General Council on Finance and Administration reports, the collection rate had rebounded somewhat. GCFA received nearly 85% of requested giving — below recent years but exceeding the most dire projections.

“It was no small task to reach these milestones, and I am certain the beneficiaries of this giving … will benefit greatly,” said Moses Kumar, GCFA’s top executive, in a statement. Among those beneficiaries are people and institutions: missionaries, historically black colleges, seminaries, Africa University and ministries to the local church, he said.

“It was no small task to reach these milestones, and I am certain the beneficiaries of this giving … will benefit greatly.” ~ Moses Kumar


All told, United Methodists gave about $124 million in apportionments to support denomination-wide ministries around the globe. That’s about a $10 million decrease from 2018.

The denomination faces an even more uncertain financial future. General Conference — the denomination’s top lawmaking body — meets again in May and on the table are a number of proposals to split the church.

Central conferences are church regions in Africa, Europe and the Philippines.

East Congo, Eastern Angola, Liberia and the Davao Area in the Philippines have consistently paid 100% since the introduction of central conference apportionments in 2017. The four episcopal areas in Europe also continued their trend paying two to five times more than the requested apportionments.

Apportionments are the share each annual conference pays to support international, national and regional missions. Some conferences call the offering “ministry shares” to emphasize that the funds are investments in what the church does both at the local and global levels.

General Conference sets the formula for requested apportionments from annual conferences and those regional church bodies, in turn, set their apportionment formula for their local churches.

GCFA requests apportionments from each U.S. conference based on a formula that includes its local church expenditures, local church costs, the economic strength of the conference and a base percentage approved by General Conference.

The North Georgia Conference, the largest conference in the U.S., has the highest apportionments and consequently gives the highest payout. That trend continued in 2019, when the conference gave more than $6 million to general church ministries, more than 90% of the requested amount.

Keith Cox, conference treasurer and director of administrative services, said the conference’s giving reflects the advice of Jesus: To whom much is given, much is expected.

“We are very blessed with large numbers of people and large churches,” Cox said. “And we have leadership at all levels who emphasize supporting conference ministries, regional ministries, and global ministries.”

Even with the denomination’s uncertain future, he said, giving remained at the same rate in January as it was the same time last year.

However, he and other church leaders expect change is coming.

The proposal before General Conference that has generated the most attention is the Protocol of Reconciliation & Grace Through Separation. The protocol would allow traditionalist churches — those who oppose same-sex weddings and the ordination of noncelibate gay clergy — to leave with their properties.

“We are Easter people, and we do have hope for the future.” ~ Keith Cox

The new group would also get $25 million in United Methodist funds. The protocol also sets aside $2 million for any other new Methodist denomination that forms.

With this in mind, GCFA is asking for feedback from United Methodist ministries on the financial implications of the legislation.

Even before the proposed separation, GCFA made plans to submit to General Conference a general church budget for 2021-2024 of about $494 million — an 18% reduction of the current four-year budget.

Cox said he is hopeful a reduction in general church apportionments would provide more flexibility for conferences and local churches.

It is unknown how many churches or conferences would depart for new denominations if the protocol passes. However, GCFA has calculated that a 20% loss of churches would reduce the general church funding still further — by $99 million, a 35% reduction of the current budget.

Even with so much uncertainty, Cox said he and other financial leaders in the diverse North Georgia Conference seek to remain non-anxious.

“We are Easter people,” he said, “and we do have hope for the future.”