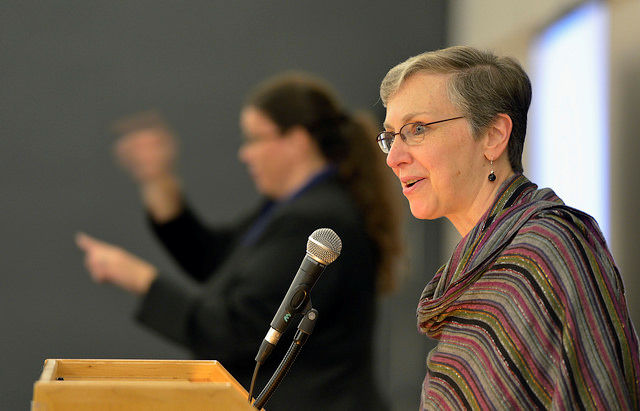 Harriet Olson speaks at a May 9 orientation for women delegates to the 2016 United Methodist General Conference in Portland, Ore. She is CEO and general secretary of United Methodist Women. Behind her, Andrea Raye of Dallas, Texas, provides sign language interpretation. ~umns photo/Paul Jeffrey

An Open Letter from United Methodist Women to the Religious Coalition for Reproductive Choice.

To the members and leaders of the Religious Coalition for Reproductive Choice,

The General Conference of The United Methodist Church passed a resolution at its May 2016 session directing the General Board of Church and Society and United Methodist Women to withdraw from membership in the Religious Coalition for Reproductive Choice. By way of this letter we are officially communicating our withdrawal.

As founding members of the Coalition, we are well aware of the important ministries you provide in support of pastors who are counseling with women and families during the “tragic conflicts of life with life” when abortion may be considered according to the Discipline of The United Methodist Church. It is worth noting that the Conference added language to the Discipline directing the church to provide “nurturing ministries to those who terminate a pregnancy, to those in the midst of a crisis pregnancy and to those who give birth” during the same session that they voted against our continuing membership in this coalition that provides much needed resourcing in this area.

Further, The United Methodist Church continues to support the need for comprehensive education on matters of sexuality, yet we were directed to withdraw from this Coalition whose work supports just that. As you already know, during this debate and in prior years, RCRC was described as a political lobbying group. Of course, where legal rights and access are threatened, the Coalition has helped us as members reach out to advocate for women and their doctors. As our Judicial Council found, as long ago as 1992, this work does not contravene our United Methodist Book of Discipline, see Decision 683.

One of the misunderstandings that surfaced during the debate on the floor has to do with the nature of ecumenical and coalition-based work. We helped to found this coalition in 1973 in order to share perspectives, learn from each other and to advance work in areas of common interest. We have been enriched by the diverse theological perspectives around the table and this has deepened our own work. We did not come to the table to convert each other, but we were gratified by your interest in the United Methodist theological framework and our carefully nuanced position on abortion. We regret that we will no longer be there to share this with you.

Even though we will not be members of RCRC, we continue our commitment to the reproductive health of women and girls. We will continue our work to support United Methodists to grow their communities of faith to have the skills, resources and connections to help women and families in all the phases of their lives. We remain committed to meeting women in the midst of difficult circumstances with tenderness, theological groundedness and skill.

With many other members of the community of faith, we encourage the Religious Coalition on Reproductive Choice to continue its important work so that women have safe, legal and affordable access to the care they need.