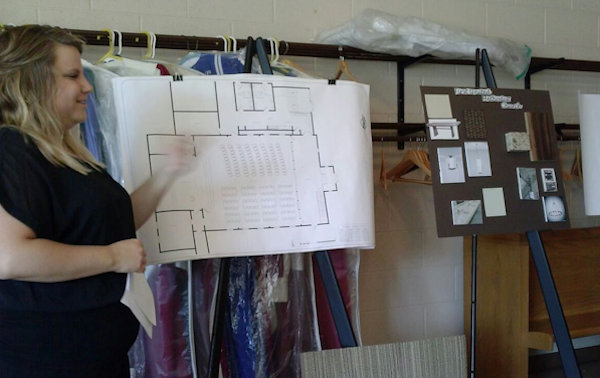 The Church is back in Berkley. But different. Here’s the resurrection story shared by Rev. Laurie Haller.

Nervous energy oozed from every corner of the entryway to the church. Fifteen students from Baker College of Auburn Hills, a campus of Michigan’s largest not-for-profit university, were preparing to make a presentation to clergy and lay leaders at the former First United Methodist Church in Berkley.

Eighteen months ago, the declining Berkley congregation voted to close and give their building and assets to Birmingham First UMC in order to start a new worshiping congregation. The appointed pastor, Zack Dunlap, and leaders at the Berkley First campus connected with the Interior Design program at Baker College for ideas about how to re-imagine an almost one-hundred-year-old building to be more welcoming to a community that was described by Money Magazine in 2015 as 28th among the top livable cities in the United States.

The students were pumped. Accustomed to working with restaurants and businesses, this was their first church. After soliciting Pastor Zack for his ideas, they divided up areas of the building and worked feverishly for two weeks to dream, measure, consult and draw up plans.

Dressed professionally and well coached by their teacher, each group was ready with floor plans, charts and sample building materials. As the presentations were about to begin, I glanced up at the wall behind the easels and charts and noticed another guest among us. Clinging to a corner of the wall and ceiling was a bat. Zack said this was the first time he’d ever seen one of these erratically flying mammals in the Berkley building.

The wheels started churning as the phrase “bats in the belfry” came to mind. A belfry is the top of a bell tower on a church where the actual bell is located. Belfries were often infested with bats, who enjoy the darkness and seclusion of such an isolated place. The Berkley building does not have a belfry, so at the same time as we wondered where the bat came from, we made no attempt to disturb it.

I couldn’t help but note that “bats in the belfry” is also an outmoded term for insanity. Claiming that someone had “bats in the belfry” was an insinuation that they had crazy thoughts (i.e. bats flitting around their head) and were thus mentally unstable or even possessed by the devil.

As the students presented their ideas and dreams for how this building might be reinvented, I envisioned a congregation that looked like them: diverse in ethnicity, sexual orientation and gender identity, background and belief. The students were very cognizant that they were designing a church, not a retail store, restaurant or commercial business. They also brought their own faith history with them, whether Greek Orthodox, Lutheran, Catholic or independent megachurch.

One student said, “As I worked on this project and walked around the building, the hopes and dreams of this new church were palpable.” Their guiding question from the beginning was, “How do we convey the reality that something new is happening here at Berkley First?” In fact, the cards that Pastor Zack hands out as he meets people in the community say, “Church is back. But different.”

Because Berkley First (the new name of the church) seeks to reach out to young families in the neighborhoods around the church, we listened carefully to the suggestions of the students, who represent the generation we want to target.

The students also talked about the WOW factor. They asked, “Where do you want to splurge in your remodeling project to make the greatest impact?” Suggestions included beveled glass, a free-standing iron cross on the stage, a feature wall in the entryway using recycled pallet wood and innovative wallpaper on the back of the stage.

I was totally engaged. The ideas were fresh and enthusiastic. Designed to be appealing to young people, their proposals intentionally retained some traditional elements as well. At times their teacher would provide gentle suggestions for how the designs might be improved. Other times she just let them go for it.

One young woman admitted that she struggled with her drafting assignment and asked God to help her. She subsequently came up with a WOW idea for a unique panel on the screen in the Fellowship Hall.

“Church is back. But different.” Maybe that’s why our bat friend was a quiet but palpable presence among us that morning. In the past, bats have been a symbol of insanity, one definition of which is “Doing the same time over and over and expecting different results.”

Berkley First will be back … but different. It will be different because if we do church the same way we’ve always done it for the past hundred years, we disregard the culture, values, hopes and dreams of the very people with whom we seek to share the love of Christ. The legacy of the original Berkley church is that when the remaining members realized the insanity of trying the same old things that were no longer working in a different world, they closed the church before their financial resources were exhausted, left the building in great shape and gifted us with a bat.

As we prepare for the launch of Berkley First, the bat has now become our teacher.

Come to think of it, the WOW factor may just be the bat, which we never saw again. Church is back. But different.

~Laurie Haller blogs regularly at Leading from the Heart.