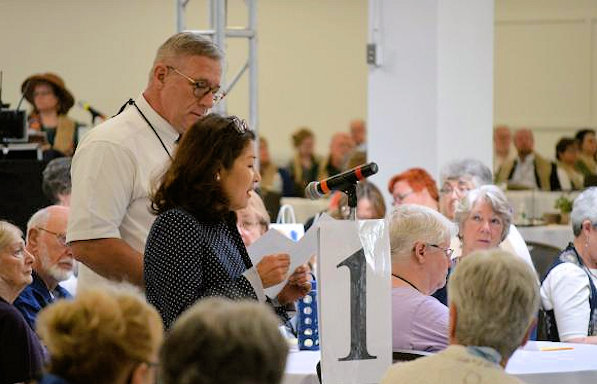 New England board of ordained ministry co-chairs Yoo-Yun Cho-Chang and Peter Hey announced they will evaluate clergy candidates “based solely upon an understanding of their gifts for ministry and their readiness to serve Jesus Christ.” ~photo New England Conference/Beth DiCoco

As the 56 Annual Conferences in the U.S. meet, human sexuality and inclusion are topics for debate and vote.

The Desert Southwest Conference, after its bishop gave an impassioned impromptu speech about full inclusion, voted for a nondiscrimination resolution that says the conference will not participate in or conduct judicial procedures related to the denomination’s prohibitions against LGBTQ persons.

The June 18 vote came one day after the New England Conference voted not to “conform or comply with provisions of the (Book of) Discipline which discriminate against LGBTQIA persons.” The acronym refers to lesbian, gay, bisexual, transgender, queer, intersex and asexual.

In addition, the California-Pacific Conference voted for a resolution urging the bishop and cabinet to state publicly they will not deny appointments based on sexual orientation or gender identity. The resolution asks the board of ordained ministry to declare it will not consider sexual orientation and gender in determining fitness for ordained ministry. Finally, it urged the conference not to participate in or conduct judicial procedures related to The Book of Discipline’s prohibitions against LGBTQ persons in minstry. The resolution passed with a show of hands.

The Book of Discipline, The United Methodist Church’s governing document, bans pastors from officiating and churches from hosting same-sex wedding. It also bans the ordination of “self-avowed practicing” gay clergy. The Judicial Council, the denomination’s top court, ruled in May that annual conferences cannot intrude on General Conference’s authority with regard to matters of ordination.

The New England Conference, which had already planned to begin with remembering the Orlando shooting victims, became a passionate conversation about the pain felt by many about the violence and the church’s stance on LGBTQ people.

The Rev. Lindsay Flick, pastor of Riverside United Methodist Church in Parsonsfield, was the first to speak before Bishop Sudarshana Devadhar and Rene Wilbur, lay leader, could address the body.

She spoke of coming out as gay at 13 and how a United Methodist told her she was going to hell.

“So I stand before you all today, asking for truth,” she said. “I am asking that we all quit pretending as though we are providing a healing witness. I ask that we stop pretending like our hands are clean in the spreading of hate, and in the oppression of LGBTQ people. I ask that we stop the whitewashing of all of our stories.

She then announced an act of repentance where burlap stoles and ashes were donned.

“Many people spoke, many came out, many disavowed the Discipline and the General Conference,” wrote the Rev. Will Green on his Facebook page about a two-hour, unplanned discussion.

Pictures of the 49 Orlando victims were projected on a screen and their names were read during the planned memorial service. The discussion about sexuality continued after the 1 p.m. break.

In a decision announced June 15, the conference board of ordained ministry said they will evaluate clergy candidates “based solely upon an understanding of their gifts for ministry and their readiness to serve Jesus Christ.”

Meanwhile, the South Georgia Conference passed a motion asking their resident bishop not receive any clergy who have publicly stated their intent to disregard the current language of the Book of Discipline regarding human sexuality.