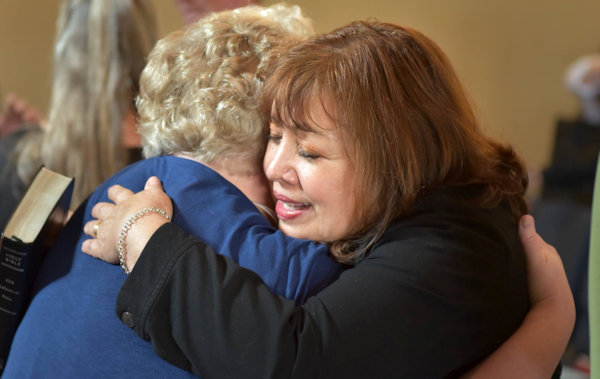 United Methodist churches in California have opened their doors to shelter burned-out neighbors.

First United Methodist Church of Santa Rosa, California, was always a church that helped others in need. After wildfires tore through Santa Rosa on Oct. 9, many in the church were homeless and relying on the help of others.

Despite the damage to homes of members, the church still opened its doors as a shelter.

“We got a knock on the door at 2 a.m., and had to evacuate immediately,” said the Rev. Blake Busick, senior pastor of the church. Fire embers rained down on Busick and his family as they left their home. Their home was destroyed, as were at least six homes of other church families.

The wildfires still raging in northern California have burned through nearly 170,000 acres, killing at least 29, destroying 3,500 homes and other structures, and forcing the evacuation of more than 20,000. Hundreds remain missing.

Most fires are still uncontained. The largest fires — in Northern California’s Sonoma, Napa and Mendocino counties — left behind charred rubble, clouds of smoke and little else.

“These fires take everything,” said Linda Caldwell, conference superintendent for Mission Collaboration for the California-Nevada Conference. In areas affected, she added, “There’s nothing left to rebuild.” Witnesses have compared the devastation to the aftermath of a nuclear blast.

Church members in Santa Rosa went to bed on Oct. 8 unaware that a fire was burning near Calistoga. High winds spread the fire so quickly that evacuees were forced to flee within minutes of the first warnings.

The knock on the door came at 4 a.m. for Lindsey Kerr, associate pastor at the Santa Rosa church. By the time she arrived at the church — which thankfully was outside of the fire zone — members were already there preparing bacon, eggs and coffee. Church members turned the church into a makeshift shelter; some 98 people stayed there on Oct. 9.

After an announcement on a local radio station that the church was open for those needing shelter, donations began arriving spontaneously — some from church members, many from strangers.

“Great people have been showing up randomly,” Kerr said. She dubbed one young man who showed up with a bag of toothbrushes from Costco “the toothbrush fairy,” and another resident who took clothes that needed washing became “the angel of laundry.”

Other northern California churches outside of the fire zone geared up quickly to provide shelter and aid for evacuees.

When members of Novato United Methodist Church learned that many evacuees — not knowing where else to go — had turned up at a local shopping mall, they devised a way to extend an invitation.

“We brought a big sign over to the mall to let people know we were open,” said the Rev. Youngmi Jung, Novato’s lead pastor. The church hosted about 60 people during the day on Monday and 50 overnight.

“A lot of folks we’ve never met before have just turned up with donations,” said Richard Hillery, a lay member and chair of the trustees. “It’s heartwarming.”

Other churches in the area remain in a “watch-and-wait” mode. So far, members of Saint Helena First United Methodist Church, located in the heart of Napa County, are safe, but life has come to a standstill, according to the Rev. Burke Owens, the church’s senior pastor.

“The schools and most of the businesses here are closed,” he said. “We’ve been told to be ready at any time to evacuate.” The smoke is dense — “it smells like you’re standing right above a campfire,” Owens said. He said the smoke poses a health threat for children and those with respiratory issues. Cellphone and internet service is erratic, and some are without power.

At the conference level, leaders collected donations for health kits, coordinated other churches on standby to shelter if needed, and kept tabs on people within the connection. “We have a number of retired clergy who live in the areas affected by the fires, and we are in the process of checking on them,” Caldwell said.

“We’re buying basic things, like toiletries,” he said. “We had to leave so quickly that nobody took anything.”

Busick noted that the congregation, which averages about 350 in weekly attendance, had just celebrated the send-off of a mission team headed to Middletown, California, on Oct. 8.

The team planned to help rebuild homes in the wake of the 2015 wildfire there. That same morning, the congregation’s scripture was the passage from Exodus recounting God’s provision of manna and quail to the Israelites.

“It’s a little eerie,” he said. “It says that what we need today will be provided. We had no idea how much it would apply.”