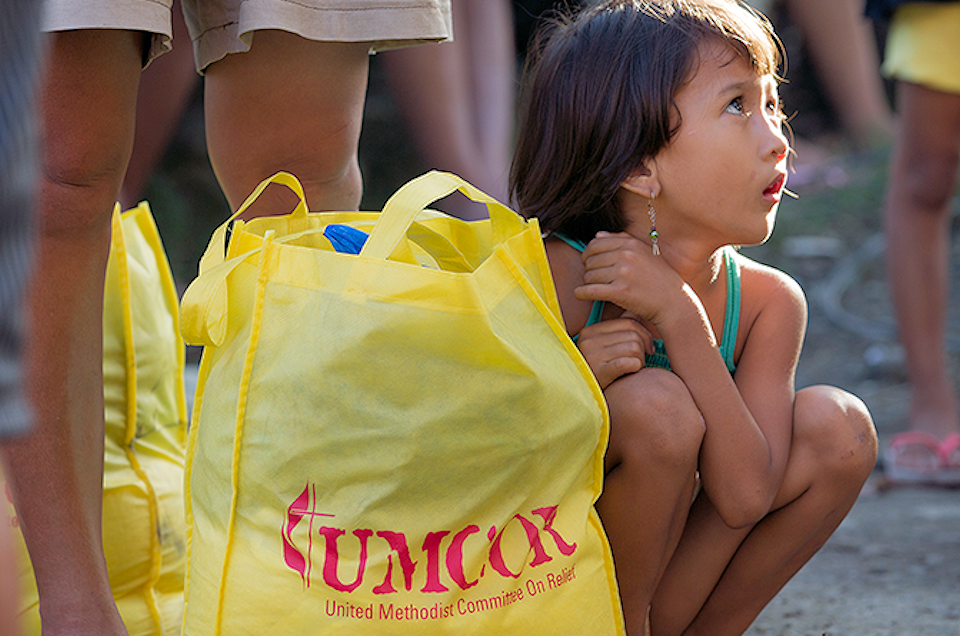 Donna-Grace Orbong, 5, sits with her family's food bag following a distribution by the United Methodist Committee on Relief for survivors of Typhoon Haiyan in Tacloban, Philippines. ~ UMCOR photo

UMCOR Sunday is March 14. Formerly One Great Hour of Sharing, this special offering helps pay administrative costs of UMCOR so every dollar YOU give can offer a person hope.

When disaster strikes around the globe—Haiti’s 2010 earthquake or Typhoon Haiyan in 2013—so many watching the drama unfold on our living room televisions feel entirely helpless. How could any one person make a difference in the wake of such widespread devastation? As responders around the globe scramble to help survivors, the United Methodist Committee on Relief, UMCOR, is prepared to act.

So don’t be fooled by the word “committee.”

Since 1940, when UMCOR’s forerunner was established to meet the needs of those suffering overseas at the onset of World War II, we’ve continued to respond to those in desperate need—today throughout more than eighty countries around the world.

The response of UMCOR isn’t something “they” do, it’s something “we” do.

That’s because your generous giving to UMCOR Sunday (formerly One Great Hour of Sharing) is what allows UMCOR to act as the arms and legs of Christ’s church, moving toward the most vulnerable in their darkest days.

Convinced that all people have God-given worth and dignity—without regard to race, religion, or gender—together we are assisting those impacted by crisis or chronic need.

Because you give, the United Methodist Church’s compassionate response to human suffering continues today:

UMCOR will be able to offer aid in Jesus’ name to those who suffer because United Methodists give through UMCOR Sunday.  In fact, it’s your generous giving that allows us to respond when disaster strikes.

When we meet the needs of those who suffer we actually minister to Jesus, who said:

As we respond, we recognize Jesus in those who are reeling in the wake of disaster.

Read stories about the impact you are making with your gifts. Mission leaders can find a kit full of UMCOR Sunday downloadables here — podcasts, social media, videos, worship resources, and more.