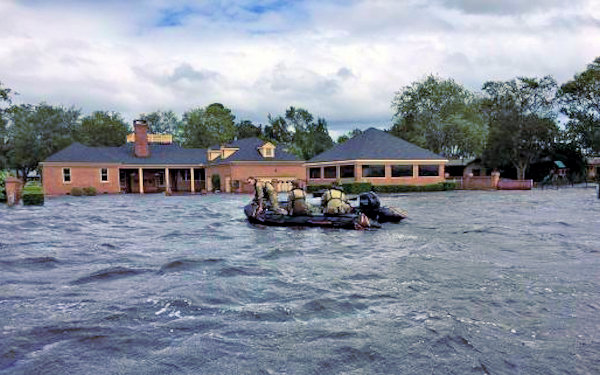 Irma left a meandering path of destruction from the Caribbean to the Southeastern U.S.

As a diminished but still significant storm called Irma continued to spread throughout the Southeastern U.S., United Methodists were among those trying to determine its impact.

The storm, which made landfall in Florida as a Category 4 Hurricane, has claimed the lives of at least seven people on the U.S. mainland and 37 people in the Caribbean. By the afternoon of Sept. 11, millions were without power in Florida, and the state was still facing the threat of storm surge, most notably in Jacksonville.

United Methodists in Georgia, Alabama and the Carolinas also were waiting to see how what had become Tropical Storm Irma would affect their states, with Charleston and Savannah experiencing flooding.

Catherine Earl, director of U.S. disaster response and partner relations for the United Methodist Committee on Relief, had consulted with the Florida Conference even before Irma’s landfall and said she was working on crafting a larger than normal emergency grant.

“What we’re trying to encourage people is to err on the side of safety, and to remain connected,” Carter said. He noted that United Methodist churches are serving as staging areas for the Red Cross and emergency-response workers.

The Rev. Rini Hernandez, the superintendent of Florida’s Southwest District, said he has not learned the state of every church in his area, but what he’s hearing so far “is just one miracle story after another.”

His district encompasses Marco Island, the second place in Florida where Irma made landfall, and Naples, which also saw extensive damage.

However, Hernandez said he has heard from 50 pastors whose churches are relatively unscathed. He added that many churches are gearing up to serve their communities in whatever ways are needed.

The Rev. Candace Lewis, Gulf Central District superintendent, said her district, which includes Tampa and Lakeland, came through “better than expected.” A native of Florida, she has weathered a number of hurricanes and she expects people across the state to come together to help in the recovery.

Earl noted that the pre-hurricane preparation, which involved consultation with multiple conferences, heightened the sense of working within the connection.

“Many of the conferences are so well prepared and have done this before,” she said. “They understand the spiritual and emotional investment it takes to lead this kind of response.”

While it may take a few days to know which churches suffered damage from Hurricane Irma, it could take days or even weeks to know how every local church responded. “They just step up and start doing,” Earl explained.

Some of that “doing” happened before Irma hit Florida, as supplies were gathered and shelters set up for evacuees moving north.

The Alabama-West Florida Conference was staging churches along the eastern I-10 corridor to be comfort stations and to provide gas cards in assistance, reported Amelia Fletcher, the conference’s disaster response coordinator.

In Augusta, Georgia, Trinity on the Hill United Methodist Church had learned hard lessons from Hurricane Matthew last year, so when the Red Cross asked the church to be a shelter, volunteers “rose to the occasion,” Julia Crim, the church’s minister of discipleship and outreach, told The Augusta Chronicle. The church was well prepared for its 180 “guests.”

West Robeson United Methodist Church, Lumberton, North Carolina, was inspired to help evacuees heading north from Florida at a rest stop off I-95. Members of the church gathered food and supplies to give away. “Instead of Sunday service … we put on our shirts of servants and came out to serve those that needed help,” the Rev. Anthony James, pastor, told WBTW-TV.

In Tampa, Florida, the Rev. Vicki Walker was out in the streets on Sept. 9, making sure homeless individuals would have refuge from the storm.

Walker, minister of missions and outreach at Hyde Park United Methodist Church in Tampa, knows many in the community through the church’s homeless ministry. However, the church building — close to an evacuation zone and under threat from storm surge — would not be safe as a shelter.

So, she spent the day driving every homeless person she saw to public shelters on higher ground.

One man, an artist, lent her his framed paintings for safe keeping during the hurricane.

“These were people in our community that if they were in an evacuation zone, where are they going to go?” Walker said. “I think God calls us to care for all of God’s children, not just the ones we like or that we’re comfortable with.”

Walker herself waited out the storm in her home, a condominium on the fourth floor of a concrete-block building. She said she was never afraid and felt called to be the peace God wants people to have.

“A storm can bring out the best in people as we come together to clean up, rebuild and provide hope,” she said. “The greatest gift that church can give is hope in a time like this.”