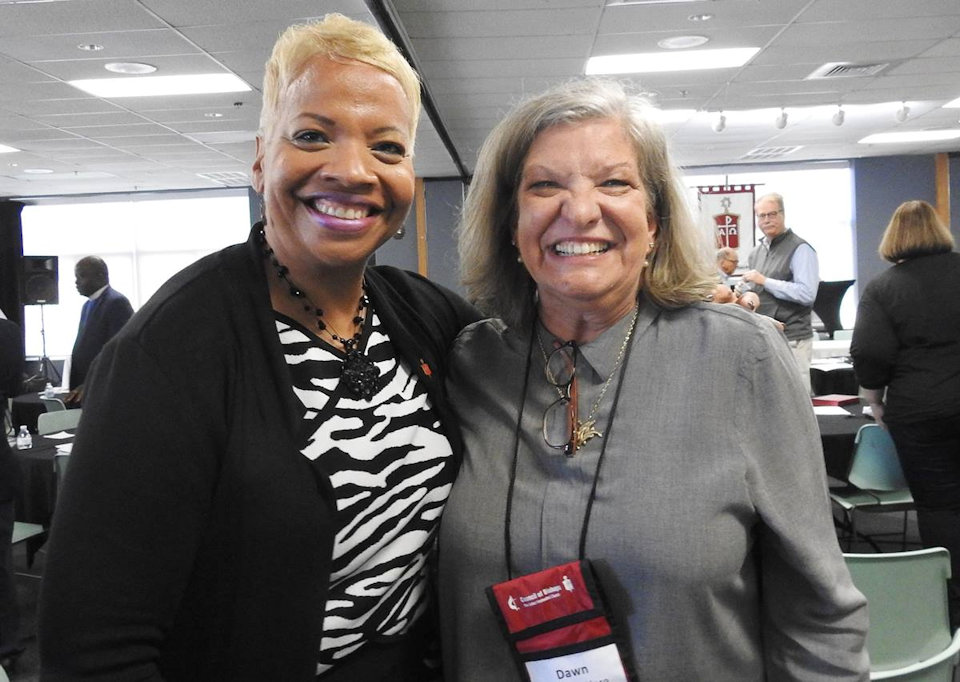 United Methodist Bishop Tracy Smith Malone (left) and Dawn Wiggins Hare celebrate an amendment to the denomination’s constitution that proclaims “men and women are of equal value in the eyes of God.” Ratification of the amendment was announced during the United Methodist Council of Bishops meeting in Lake Junaluska, N.C. ~ UM News/Sam Hodges

The United Methodist Church has changed its Constitution to affirm equality and assert that women are not second class citizens in the family of God.

After a revote, United Methodists around the globe have amended the denomination’s constitution to proclaim “men and women are of equal value in the eyes of God.”

“While we still have much progress to make, this is an indication that we as a church do acknowledge and embrace women at every level of the church,” said Bishop Tracy Smith Malone, president of the United Methodist Commission on the Status and Role of Women. She also leads the East Ohio Conference.

The amendment now has received 92.2% of the annual conference votes submitted to the Council of Bishops, the council’s secretary Bishop Mande Muyombo announced Nov. 6. Muyombo leads conferences in the North Katanga area of Congo.

The revote took place after the Ask the UMC and UM News teams reported incorrect wording in what was initially sent to annual conference voters.

The amendment that went before annual conference voters in 2017-2018 inadvertently included a sentence from the original legislation that a 2016 General Conference legislative committee had deleted.

The stricken sentence was: “The United Methodist Church recognizes it is contrary to Scripture and to logic to say that God is male or female, as maleness and femaleness are characteristics of human bodies and cultures, not characteristics of the divine.”

After learning of the error, the Rev. Gary Graves — secretary of General Conference — sent the amendment with the correct wording for a second vote. The revote, which started in May 2018, took place over several months at annual conference sessions spread across four continents.

The revised amendment sailed through the full General Conference with 93% of the vote — 746-56. However, the version with the deleted sentence narrowly fell short with 66.5% of the annual conference vote — 31,304 yes and 15,753 no.

When UM News reached out last year to conference voters who spurned the amendment, many cited the stricken sentence as the reason for their votes.

While Muyombo did not have an exact tally, he reiterated the overwhelming support the revote on equality received.

Carol Napier, a member of Glenn Memorial United Methodist Church in the North Georgia Conference, submitted the original amendment to the 2016 General Conference.

“I introduced this constitutional amendment for all the girls around the world who are raised in churches that tell them in subtle and not so subtle ways that they are second-class citizen — and for the women, who have worked so hard to eliminate sexism in the church,” said the longtime Sunday school teacher.

“Now we have a powerful tool to help transform our churches into places that live God’s truth: women and girls are made in the image of God, and therefore, of infinite worth. I give thanks to the One who created us all and calls each one of us to be an instrument of healing and justice.”

Dawn Wiggins Hare, top executive of the Commission on the Status and Role of Women, said Napier’s amendment shows the power of one person to make a difference. The commission, created by General Conference in 1972, has the task of working toward the elimination of sexism in the life of the church.

“This is so significant that the church as affirmed the biblical teaching that women are created in the image of God,” Hare said. “The fact that this was from a laywoman in North Georgia just represents the full inclusion as well as the power and spirit of women in the church, including our wonderful laywomen.”

Still, Hare acknowledged the ratification was somewhat bittersweet. The commission had submitted another amendment promoting women’s equality that faced defeat in 2018.

The other measure would have added gender, ability, age and marital status to the list of characteristics that do not bar people from membership in the church. This amendment also had the support of United Methodist Women, Discipleship Ministries and the DisAbility Ministries Committee. The annual conference vote was 61.3 percent — 29,049 yes and 18,317 no.

In 2018, the Council of Bishops expressed “dismay” at the apparent outcome of the two women’s equality amendments.

There was a different mood immediately after the announcement of the revote results. Bishops applauded the news.

The new amendment takes effect immediately, and the United Methodist Publishing House plans to issue the addition to the Book of Discipline as soon as possible. The Discipline contains the constitution and other church policies and teachings. This will be the Discipline’s new Paragraph 6.

Hare also told UM News that her commission’s board has not given up on the church membership amendment that fell short in 2018. The agency has resubmitted the proposal to the 2020 General Conference, which will be May 5-15 in Minneapolis.