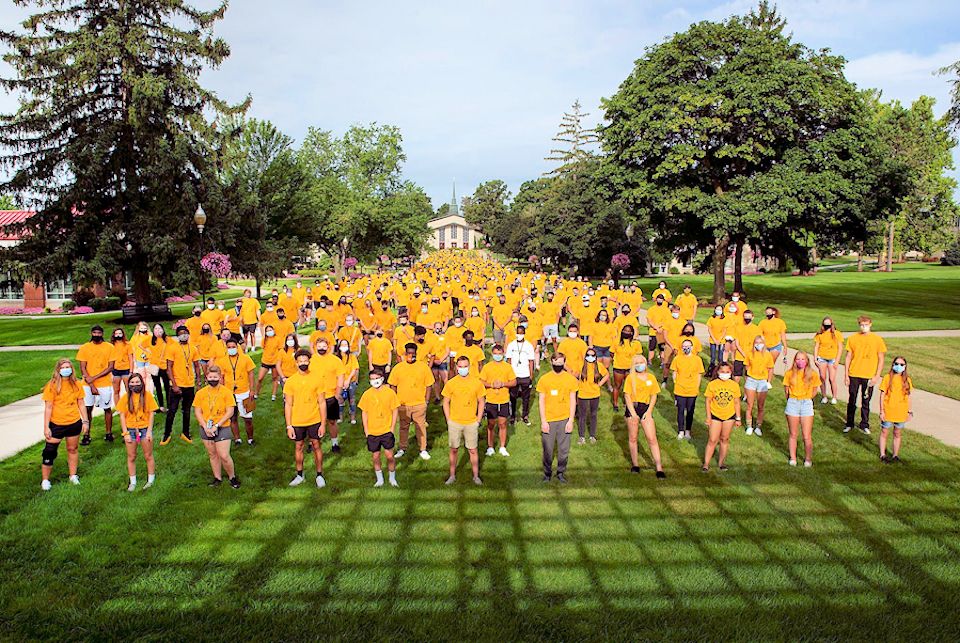 The freshman class arrives at the campus of Adrian College. “Sixteen years I’ve been doing this, saying hello to freshmen in groups coming in. Obviously, this one is different." says President Jeffery R. Docking. ~ Facebook/Adrian College

A sampling of United Methodist-related schools found a strong push to bring students back to dorm rooms and in-person classes, with online courses a big part of the mix.

As president of United Methodist-related McMurry University in Abilene, TX, Sandra Harper is used to worrying about the big stuff, such as finances, enrollment, personnel, and buildings.

Last week, she was also having to make sure students were wearing masks and getting their temperatures taken before checking into dorm rooms.

Harper’s concerns include the looming West Texas Fair & Rodeo, an opportunity for the coronavirus to spread through Abilene and surrounding Taylor County.

“That’s a big event, and it hasn’t been canceled,” Harper said, noting that her school has no known COVID-19 cases and has a contact-tracing team ready in case trouble emerges.

Across United Methodist-related higher education — including 13 seminaries and 112 colleges and universities in the U.S. alone — there’s a scramble on to reopen safely for fall semester amid the ongoing pandemic. Many schools are resuming classes this week.

Scott Miller is in his 30th year as a college president, a period that includes 9/11 and the Great Recession. He doesn’t think those events compare to the challenges currently facing private higher education.

“You add those together, and multiple by ten, and that’s what the pandemic has created for us,” said Miller, president of Virginia Wesleyan University and the North American Association of Methodist Schools, Colleges and Universities.

Virginia Wesleyan, in Virginia Beach, is welcoming students back on campus for a mix of in-person and online classes, but with a punch list of changes in place, including a hold on athletics.

Gatherings of more than 50 people currently aren’t allowed in Virginia Wesleyan’s part of the state. That means sit-down dining at the school has been replaced by “grab and go.”

Goodbye for now, to that beloved fixture of the campus dining hall — the salad bar.

“We have to have staff prepare salads for students,” said Keith Moore, Virginia Wesleyan’s vice president for campus life and operational management.

When COVID-19 forced much of the U.S. into lock-down in March, United Methodist colleges and seminaries joined their counterparts in moving to online classes only for the balance of spring term.

“That was a godsend,” Harper said.

But the pandemic has persisted, complicated by widely varying infection rates across the country.

Some United Methodist seminaries, such as Garrett-Evangelical Theological Seminary, in Evanston, IL, made an early call to stick with online classes through the term.

“We’re very cautious. We have not decided about the spring, and we probably won’t until early October,” said Lallene Rector, Garrett-Evangelical’s president. “We want to see what’s happening with the other schools that are opening.”

Methodist Theological School in Ohio is, like Garrett-Evangelical, a stand-alone institution — not embedded in a university. MTSO’s surveying found new students, especially, wanted to be on campus, so the seminary is offering some in-person classes this term.
The roomy, 80-acre campus in Delaware, OH, helped with that decision.

“We can social distance with the best of them,” said the Rev. Jay Rundell, president.

That will mean some in-person classes, but lots of online classes, and students who want to take all their classes online can do so.

“Some of our students have chosen a completely online option and not even moved back to North Carolina,” said G. Sujin Pak, vice dean of academic affairs.

Duke is just 11 miles from the University of North Carolina at Chapel Hill, which recently pulled back on offering in-person classes after a spike of COVID-19 cases among students.

At Duke, Pak said, mask-wearing is strictly enforced, and there’s a Duke Compact that students sign, wherein they agree to observe health protocols.

“We’ve also decided to start a week early so we could finish all our classes before Thanksgiving. Therefore, we would not have people dispersing and coming back,” Pak said.

A sampling of United Methodist-related colleges found a strong push to bring students back to dorm rooms and in-person classes, with online classes a big part of the mix.

Dillard University, one of 11 historically black colleges and universities supported by the United Methodist Black College Fund, is using that hybrid approach. The New Orleans university has posted on its website a 20-page guide for reopening titled “#Reconnect DU: Mask/Cleanse/Distance.”

President Walter Kimbrough said Dillard did surveys, and he personally sat in on focus groups to gauge what turned out to be strong sentiment, including from faculty, for resuming campus life.

But lots will be different.

“We’re on the conservative side with residence halls. Everybody’s in a single,” Kimbrough said.

For now, Dillard appears to be only slightly behind last fall in enrollment.

Simpson College, in Indianola, IA, also appears to be holding its own in enrollment, said Heidi Levine, vice president for student development and planning, and chair of the crisis management team.

During fall term at Simpson, mask-wearing in public settings is required, and athletics is postponed. Many other events will be held virtually. Tele-therapy will be provided for students needing psychological counseling.

But she quickly added that Simpson’s surveys too found a strong desire to have as much happening on campus as possible.

“Students at a school like Simpson want that face-to-face experience,” she said.

The University of Indianapolis is, with 5,500 students and a range of graduate programs, one of the larger United Methodist-affiliated schools.

President Robert Manuel said that this fall, 36 percent of students would be studying remotely, 41 percent will combine online and in-person classes, and 23 percent will essentially be on campus full time.

The reopening has required strenuous and expensive efforts to create a safe environment, and he said there’d been investment in technology for expanded and enhanced online instruction.

While Manuel doesn’t downplay that this is a hard time, he thinks private higher education is going to pass the test presented by the pandemic.

“Some of the pundits were saying there’s not going to be an international student in sight. We have a large number joining us already,” Manuel said.

For sure, innovation is on display all over, including at Perkins School of Theology.

That United Methodist seminary, part of Southern Methodist University in Dallas, is using the HyFlex format for a combination of in-person and online instruction.

Perkins also is debuting a course on ministry in digital culture, led by professors Robert Hunt and Marcell Steuernagel.

“The course will be taught entirely online, using a full range of digital media both synchronously and asynchronously, making the course itself a laboratory for exploring digitally mediated relationships,” Hunt said.