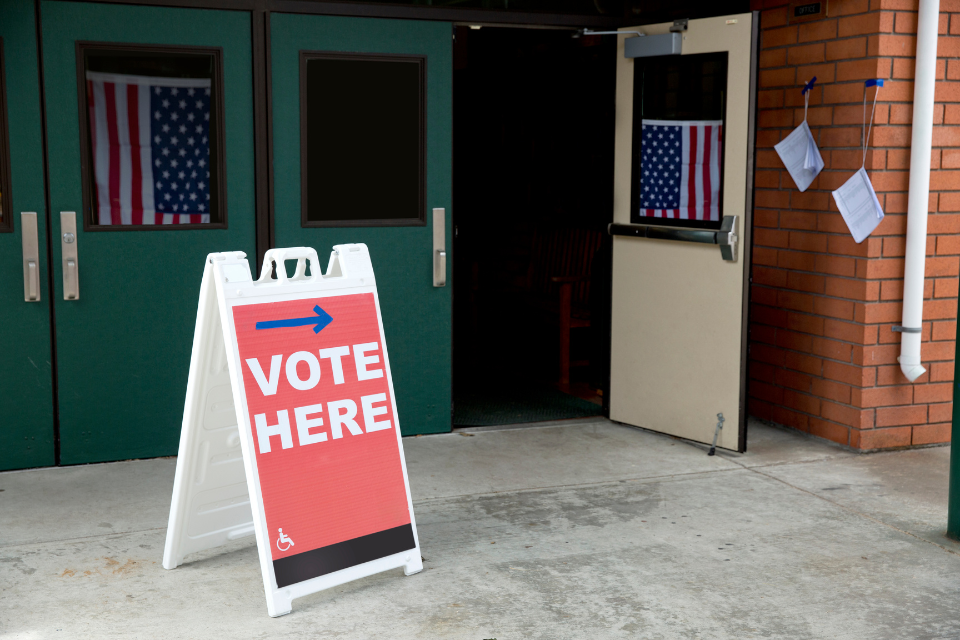 Last week, the Michigan Department of State sent a request to the Michigan Conference asking communities of faith to help recruit election workers to serve during the upcoming midterm elections on November 8. There is a critical shortage of volunteers, with the election less than six weeks away.

Engaging in the electoral process is a way United Methodists can put Christian faith into practice by ensuring all people have access to free and fair elections as a fundamental human right and a pillar of democracy. These beliefs are rooted in the Scriptures and our United Methodist Social Principles.

Michigan United Methodists are urged to consider becoming election workers in this time of need. This is just one way United Methodists here in Michigan can advocate for fair and free elections in our communities. Others include encouraging participation in elections, educating communities on issues and candidates, inviting churches to be polling sites, and helping safeguard the right to vote by advocating for just voting practices.

Naming the Need for Election Workers in Michigan

Democracy MVP is a nonpartisan, statewide recruitment program run by the Michigan Department of State. It was launched in 2020 to address the nationwide election worker shortage caused by the COVID-19 pandemic, and this shortage continues. Democracy MVP helps connect members of the public interested in serving local clerks and our elections.

Michigan has 83 counties, 274 cities, and 1,242 townships. During an election, each of these units of government requires a staff of paid workers to assist voters and help process ballots.

Local clerks are looking for individuals skilled in organization, customer service, project management, or computer software and technology. If hired to serve, volunteers will receive official training on how to run elections in accordance with state election law.

Election workers at a polling place may have different responsibilities, including greeting and checking in voters, issuing ballots to voters, or assisting voters with tabulating their ballots. Individuals may also be hired to assist with the processing of mail-in ballots.

To become an election worker, individuals must be registered voters in the state of Michigan and affiliate with a political party (per Michigan law, election workers may not identify as independent or unaffiliated). More details on volunteer qualifications, along with additional frequently asked questions (FAQs), are found on the Democracy MVP website.

After the interest form is completed (ensure “UMC” is put in the organizational name field on the form), information will be provided to local clerks looking to hire election workers for the upcoming midterm election. Once contacted by the local clerk, individuals will still need to complete an official application with the office to be hired. Each of Michigan’s 1,500 clerk offices employs its election inspectors independently.

Bishop David Bard invites Michigan United Methodists to prayerfully review these materials and act soon: “Please read the information and give every consideration to offering this service to your community. This is not about partisan politics. It is about the healthy functioning of our democracy and making sure that the voting process works well for all those exercising their right to vote.”

Living Out Our Wesleyan Theology

United Methodists have long advocated for “social holiness,” a faith put into action out in the open, among people, not hidden like a flame under a bushel. John Wesley noted in his third discourse on the Sermon on the Mount: “Sure it is, that a secret, unobserved religion, cannot be the religion of Jesus Christ. Whatever religion can be concealed, is not Christianity.”

This notion of the church living out its faith in the world in relationship with all peoples and communities, reflecting the reconciling love of Christ, is part of United Methodist DNA, and it takes a variety of forms. It involves civic engagement and participation in the electoral process of democratic societies.

Rev. Kennetha Bigham-Tsai, the Michigan Conference’s episcopal candidate for the upcoming North Central Jurisdictional Conference, reiterates this commitment: “As United Methodists, we believe in the separation of church and state, but we also believe in the responsibility of Christian people to be involved in the decisions that shape our common lives. At a time when democracy is under threat all over the world, we must do all that we can at the local level to ensure free and fair elections.”

Active civic engagement and the pursuit of God’s justice are rooted in the Scriptures, in the messages of Hebrew prophets, in the lives of individuals like Esther and Moses, who worked within political systems and even challenged them, and in Jesus’ call to love your neighbor as yourself, to look out for the lost and least, and to advocate for those on societal margins.

This call to engage the political sphere is also rooted in our United Methodist Social Principles: “The strength of a political system depends upon the full and willing participation of its citizens. The church should continually exert a strong ethical influence upon the state, supporting policies and programs deemed to be just and opposing policies and programs that are unjust.” (¶164 B).

Volunteering as election workers here in Michigan is one way United Methodists, as people of faith, can “hold governments responsible for the protection of the rights of the people to free and fair elections.” (¶164 A). This includes recognizing the inherent dignity of every person and upholding their social and political rights, which means there are fair and transparent paths to citizenship and fair political representation of all residents.

Being an election worker can also help ensure that Michiganders will “have access to all essential information regarding their government and its policies” (¶164 D). This helps to ensure a transparent and secure electoral process.

Bishop Bard added, “‘We have theological reasons to work for and struggle for better democracy.’ I wrote those words nearly thirty years ago in my doctoral dissertation. I think and believe that Christians have reasons, rooted in our faith in Jesus Christ, to support political democracy.”

Getting Out the Vote in Michigan

Rev. Tiffany Newsom, pastor of Laingsburg UMC in rural Shiawassee County, serves as an election worker and considers it an expression of her faith as a United Methodist. Her faith compels her to be about the work of transforming the world, which includes participating in the electoral process. As a clergy person, she knows she cannot endorse a candidate or unduly influence the vote of church members. Still, she can encourage people to register to vote, vote herself, and volunteer her time as an election worker.

“Based on my experience,” Pastor Newsom said, “I am convinced that if every person served as a poll worker just once, it would do wonders toward restoring the public’s confidence in our election process.”

Under Pastor Newsom’s leadership, Laingsburg UMC has been studying the United Methodist Social Principles, which has led them to write to their elected officials and host meet-and-greet listening sessions. On September 27, U.S. Representative Elissa Slotkin (MI-08) spoke in a public forum at Laingsburg, and other candidates have been invited to hold similar events.

Other United Methodist churches choose to be polling sites for elections as a commitment to being in service to their communities. And there is a mix of practical and mission-motivated reasons churches become polling sites.

Rev. Joel Fitzgerald, pastor of Albion: First UMC, noted that growing spiritually and building relationships is the mission of Albion: First, and one of the explicit ways they do this is by being a resource. Pastor Fitzgerald noted, “Hosting elections allows us to fulfill our mission and leverage our presence within the city and our well-maintained building.”

Holt UMC answered the call to be a polling place a few years ago, and there was never any debate about whether they’d become one or not. This was partly due to their location at the intersection of two main streets—Cedar Street and Aurelius Road. They call themselves “The Church at the Crossroads.” According to Rev. Mark Erbes, pastor at Holt, they also saw it as a good way for community members to experience what it was like being in their building. “But most of all,” Pastor Erbes said, “we saw it as a response to the historical call to all UMC congregations . . . to play an active role in our greater community in all the ways that we can.”

Rev. Amee Paparella, pastor at Sunnyside UMC in Kalamazoo, noted the welcoming philosophy of her congregation as a motivation. Being a polling location is just one of their open doors extending beyond Sunday mornings. “Partnering with our community,” Pastor Paparella said, “to provide an accessible voting location builds on our commitment to inclusion and good stewardship.”

Having an accessible building that is in service to the community is certainly essential for Sidnaw UMC in Houghton County in the western Upper Peninsula. Sidnaw UMC is only one of two polling sites in Duncan Township, with the other one being in Kenton, 9 miles away. When the township building in Sidnaw was converted into a private residence, there was no suitable polling site in Sidnaw that was Americans with Disabilities Act (ADA) approved. When this happened, Sidnaw UMC member Joan Thompson and others worked closely with the ADA to secure financing and ensure their church had a ramp and a concrete pad built so their community room was ADA compliant and could become a polling site. Joan recalled not wanting to lose the convenient polling site for this rural, aged community. “I’m a firm believer,” she concluded, “that once you lose something out of your community, you don’t get it back.”

The General Board of Church and Society of The United Methodist Church has put together a list of political engagement dos and don’ts that churches should follow without incurring issues with the Internal Revenue Service (IRS) and violating a church’s tax-exempt status.

Note: Visit michigan.gov/vote to find lots of voting information for Michigan residents, including registering to vote, requesting an absentee ballot, finding a polling place, and viewing the proposals and candidates on the upcoming November 8 ballot.