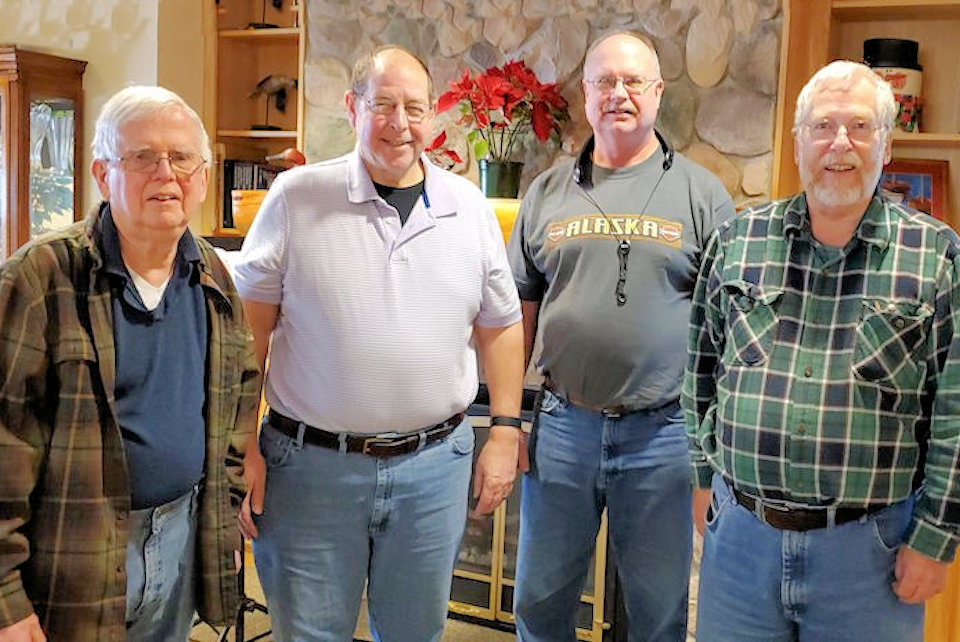 The Four Guys came together from three states to retire in the eastern Upper Peninsula L-r: Lowell Peterson, David Bean, Gregg Bush, and Paul Donelson. ~ photo taken by Bob Smith a resident of Cedar Cove in Cedarville and reporter for the St. Ignace News.

So, what might United Methodist pastors do after they retire? A couple of us retired clergy, now living in the eastern end of Michigan’s Upper Peninsula, play in a music ensemble with two other retirees. We call our ensemble “The Four Guys.”

The Rev. Lowell Peterson, who retired out of the West Ohio Conference about 15 years ago, now makes his home in Cedarville. A few years ago, he started playing his cornet about once a month at Cedarville’s Bethany Lutheran Church. Over time, he connected with Gregg Bush (tenor saxophone), a retired corrections officer living in Sault Ste. Marie. A short time later, David Bean, a retired Illinois high school music teacher living in Bay Mills, joined (clarinet and alto saxophone).

I retired out of the Detroit Conference five years ago and moved to De Tour Village, 20 miles east of Cedarville. I joined the group with my trumpet this past December.

The Guys regularly perform at Cedar Cove, an assisted living facility in Cedarville, and Medilodge, a care center in Sault Sainte Marie. The group is also scheduled to play an hour’s concert at the Cedarville Library on February 16th. We just added another facility to our list of gigs we do each month. We just performed at the assisted living facility Freighter View, which overlooks the Soo Locks. The Freighter View folks were so happy with us that they gave us a free lunch! Of course, we don’t get paid for what we do. But it sure was a good meal! 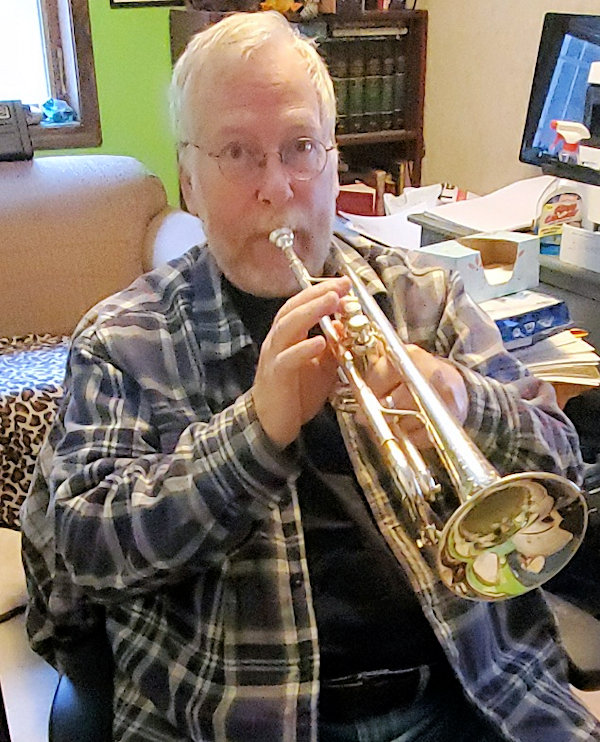 The musical selections vary by the season. In January the ensemble played several African American spirituals, chosen to commemorate Martin Luther King, Jr. Day on January 20th. In February the selections will be popular old love songs, like “While Strolling Thru’ The Park One Day,” “Bring Back My Bonnie,” and “When You and I Were Young, Maggie.”

Peterson has been picking out the repertoire as he has a relatively abundant collection of music at home from which to choose. Since I have been composing hymns with the use of Sibelius, a computer music-arranging program, I print out the music for our group.

At the care centers the ensemble plays while the residents eat lunch in the main dining rooms. After they’re finished playing, the musicians spend time with the residents, talking, visiting some of them in their rooms, and eating lunch with some of them.

“The Four Guys” rehearse together twice a month in each other’s homes, each taking turns hosting. Being that the musicians’ houses are spread out between Bay Mills, Sault St. Marie, Cedarville, and De Tour Village, they save gas by riding together, not only to get to practice sessions but in order to get to performances, as well.

Since David Bean is a retired music teacher, the group gets lots of help in the rehearsals!

~ Editor’s Note: In addition to his gig with the Four Guys, the Rev. Paul Donelson has other opportunities to toot his trumpet. This winter he has joined the De Tour High School and Middle School bands, who had no trumpet player. “I was asked by their music teacher if I would play my horn with them,” Paul explains. “There I was, an old guy with the kids in the winter concert having fun. I wore my tux.”