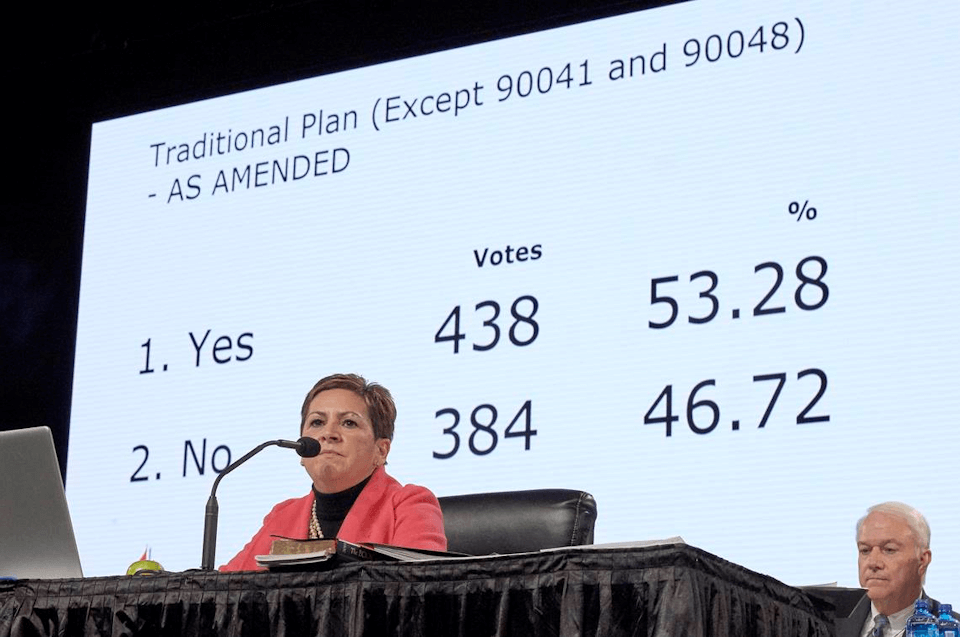 Bishop Cynthia Fierro Harvey observes the results from a Feb. 26 vote for the Traditional Plan, which affirms the church’s current bans on ordaining LGBTQ clergy and officiating at or hosting same-sex marriage. The vote came on the last day of the 2019 General Conference in St. Louis. ~ umns photo/Paul Jeffrey

Those supporting the Traditional Plan say the vote was the best way forward, but it’s not a time for celebration.

The votes were counted and one plan won, but this is a bittersweet moment in The United Methodist Church’s history, said many who supported the Traditional Plan.

The vote to strengthen the church’s bans on “self-avowed practicing” gay clergy and same-sex weddings was the right one, said the Rev. Jody Flowers. But he said that vote has caused much pain and will probably mean the denomination will split.

“I believe the Modified Traditional Plan is the best way forward because it is true to the words of Jesus and to the overall witness of the scriptures as related to issues of human sexuality,” added the pastor of Chapin United Methodist Church in South Carolina.

“Having said that, I also grieve because this outcome has caused no small amount of pain for those who wrestle with same sex attraction. For anyone to feel that there is no place in this denomination for them is heartbreaking,” Flowers said.

The special General Conference, by a vote of 438 to 384, adopted the Traditional Plan that strengthens enforcement of bans on “self-avowed practicing” gay clergy and same-sex weddings. The decision keeps the language that homosexuality is incompatible with Christian teaching. General Conference is the top lawmaking body of church.

The Rev. Bob Kaylor, Tri-Lakes United Methodist Church in Monument, Colorado, said he had been preparing his congregation for the likelihood that the decision was unlikely to resolve the division in the church.

His church, which is Traditionalist-minded, is in the conference overseen by Bishop Karen Oliveto, a lesbian married to another woman. Oliveto was elected in 2016 and is the denomination’s first openly gay bishop.

“For us here in the West, nothing much has actually changed. The leadership of the Mountain Sky Conference has been in opposition to the sexuality language in the Book of Discipline long before General Conference and, even with enhanced accountability procedures in place, will continue to act on their beliefs,” Kaylor said.

Kaylor said about 100 people attended a debriefing he held at his church after the denomination’s top lawmaking assembly ended.

“I outlined what happened and stressed that there were no winners in the process.”

Since then, Kaylor said he and three other traditional-minded pastors sat down with Bishop Oliveto and the Mountain Sky Conference cabinet to begin a dialogue about moving forward despite their differences.

“It was a constructive and grace-filled meeting and there was a pledge among all at the table to always assume the best of one another and to continue in ministry with integrity as we anticipate whatever happens at the denominational level,” he said.

While General Conference votes are by secret ballot, supporters of various plans have said that two-thirds of U.S. delegates supported the One Church Plan, while 80 percent of delegates outside the U.S. supported the Traditional Plan. The One Church Plan would have left questions of such weddings up to individual clergy and congregations — and questions of gay ordination up to individual conferences.

But Hilario, who is conference lay leader and director of Connectional Ministries, said she cannot rejoice fully.

“I shed tears instead. I am also hurting for my LGBTQ friends.”

The Rev. Johnson Mones, a professor at Wesley Divinity Seminary and Wesleyan University-Philippines said he believes the Traditional Plan is true to the beliefs and practices of original Methodism.

At a gathering for the Zimbabwe Episcopal Area on March 24, Bishop Eben Kanukayi Nhiwatiwa reported the outcome of General Conference at a service at Ehnes Memorial United Methodist Church. His announcement of the 438-384 vote for the Traditional Plan was met with deafening celebrations of clapping and ululation as a sign of joy, acceptance and appreciation.

“As Zimbabweans, we welcome the resolution to the matter on human sexuality. We stand guided by the Traditional Plan principles from the Book of Discipline and the Bible which promotes marriages of opposite sex for multiplication.”

Simon Mafunda, a General Conference delegate from the East Zimbabwe Conference, said the rhetoric depicting the Traditional Plan as harsh, punitive and mean-spirited “is an exaggeration.”

“We are being called to abiding and respecting the rules and principles that we willingly enacted and lived by for decades,” he said. “I am personally persuaded to believe that there is still opportunity to live together as a church in unity and harmony. It takes listening to each other honestly. It takes serious and sincere engagement. It takes accepting and taking other people for who they are.”

The subject of a denominational split exploded publicly when an email written by the Rev. Jerry Kulah was published by Mainstream UMC, which was organized in support of the One Church Plan by the Rev. Mark Holland.

Holland, executive director of Mainstream UMC, characterized the email from Kulah, a General Conference delegate from Liberia and general coordinator of the Africa Initiative, as answering a call for unity with “a call for divorce.” Holland wrote that Kulah’s email highlighted the fundamental difference between One Church Plan supporters, who believe United Methodists of different opinions could live together, and Traditional Plan supporters, who don’t think the two groups can live together.

Kulah, a General Conference delegate from Liberia, general coordinator of the Africa Initiative and dean of United Methodist Gbarnga School of Theology, urged Holland to “move on” in the email, which he said was in response to an email he received from Holland that called the outcome of the special general conference a “mess.” Kulah also said he never intended for the email to be published.

“I was simply challenging him and his followers to discontinue their defiant attitude including demonstrations when things do not seem to go their way. If one is a part of an institution or an organization and it reaches the point where he or she no longer feels comfortable in submitting to its governing policies, principles and rules, he or she has the liberty to disassociate and move on to another that he or she feels comfortable with. So, in essence, I was encouraging Mark and others to discontinue their defiant posture, and let us live and make disciples of Jesus Christ in peace,” Kulah told United Methodist News Service.

Holland said the email wasn’t just sent to him but to a 72-person email blast.

“When you send an email to that many people it is public,” he said. “If you are going to put something in writing you should be prepared to stand behind it.

“The irony that the U.S. church is funding 99.3 percent of global budget and someone who is the dean of an institution that is receiving U.S. support is asking two-thirds of his funders to leave the church is a tone-deaf statement that has no connection with reality.”

Jacob Nunn, a member of Out of the Box Worship Center, a United Methodist Church in Hillsville, Virginia, said he supported the Traditional Plan but his heart breaks at the thought of a split.

“It breaks my heart to see such a beautiful church as the United Methodist turn more into the Divided Methodist, because of a decision that honestly shouldn’t have even been brought to question. My wish for the future is just that we remain The United Methodist Church,” said Nunn.

“The right decision for us is the one in which the word of God prevails,” Anderson said. “Now the task is to graciously separate the parts who can’t accept it so that the church can re-unify around gospel teaching.”

Anderson said many people were offended by the public pledge of unfaithfulness from the Michigan Board of Ordained Ministry and some Michigan clergy.
Anderson said he has great hope for the Methodist movement.

“I believe in all the ferment, the Holy Spirit is bringing about a new alignment in Methodism that will be unified, global and vibrantly evangelistic. The tottering legacy structures of the past will be no more. Branches are being pruned and a new, leaner and more fruitful Methodism will rise in its place. The dark tunnel we are in is only a birth canal and I see light coming!”

“We had solid, honest group conversations, discussions at the leadership level, and many deep one-on-one conversations over coffee or in my office,” she said. So the decision from the 2019 General Conference “did not shake us at our core because we had already done both the theological and relational work needed to get here.”

“These days, my dreams for our tribe are focused on theological revival,” she said.

“I certainly hope this season can birth something new (and soon) that allows differing sides to move on in ministry with integrity, no longer biting and devouring one another but loving deeply, from the heart.”

Pat Henry, a member of Trinity United Methodist Church, Conway, South Carolina, said it is not a time to celebrate but it is a time to be thankful that General Conference 2019 adopted a scriptural view.

“It is also a time for the church to make sure that the LGBTQ community understands that all people are welcome to come and worship in (United) Methodist churches and that they are loved the same as all the rest of us sinners,” he said.