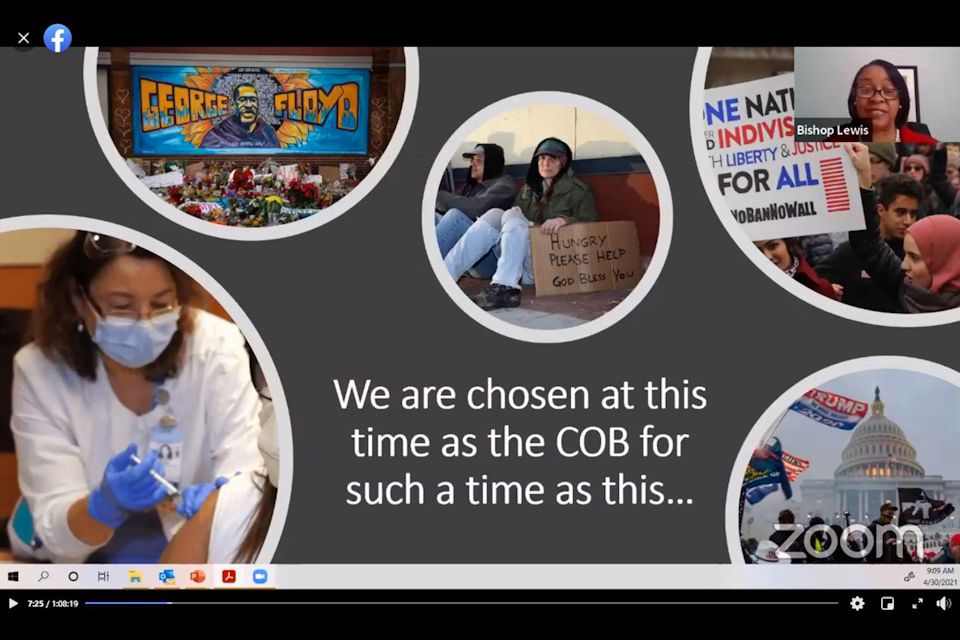 The Virginia Conference’s Bishop Sharma D. Lewis (upper right corner) leads the devotional during the April 30 session of the United Methodist Council of Bishops spring meeting. The bishops maintained that no elections of bishops or agency board members would be held this year, despite some delegates urging otherwise. ~ UM News/screengrab courtesy of the Council of Bishops via ZOOM

The Council of Bishops held fast to its plans to delay electing any new leaders until after the postponed General Conference, despite some delegates’ calls for elections this year.

However, the council also rescinded its earlier recommendation that no new U.S. bishops be elected until 2024 and opened the door for episcopal elections in November 2022.

The bishops called for U.S. jurisdictional conferences to be held Nov. 2-4, 2022, “for the purpose of electing bishops and members of our general agencies,” said Bishop Cynthia Fierro Harvey, the Council of Bishops president.

“The Council of Bishops strongly encourages consideration of mission, context, resources and future impact of the COVID-19 pandemic and potential changes in The United Methodist Church in making decisions about the number of bishops to be elected,” she added.

Harvey, who also leads the Louisiana Conference, reported the bishops’ decisions on April 30 near the conclusion of the council’s online spring meeting. The bishops’ five-day meeting took place mostly out of public view.

For the past year, bishops have been scrambling to deal with the ramifications of the COVID-19 pandemic. The deadly disease and resulting international travel restrictions have now twice postponed the General Conference and put on hold proposals to split the church after decades of debate over LGBTQ inclusion.

The denomination’s top legislative assembly, originally set for May 2020, is now scheduled for Aug. 29-Sept. 6, 2022, in Minneapolis. Harvey announced that bishops affirmed that the delegates elected to the postponed 2020 General Conference remain the duly elected delegates to serve during the new dates.

But before General Conference can meet, more than a dozen of the 46 active U.S. bishops plan to retire or already have taken on new roles with the Council of Bishops this year.

Last November, the Council of Bishops strongly recommended a hold on electing any of their successors until 2024 — citing financial concerns and the fact that it’s still uncertain which parts of the church will stay and which will go.

The remaining U.S. bishops have been making plans to expand the episcopal areas they cover in the interim.

Many delegates have argued that holding no elections until 2024 is more dramatic than financial sustainability requires. Virtual meetings and the delay in elections from 2020 have already helped bishops cut costs. The denomination also saw a surge in giving at the end of 2020.

Ahead of this week’s meeting, a group of General Conference delegates urged bishops to call for special jurisdictional conference sessions to elect some of the retiring bishops’ successors as well as new agency board members.

Bishops preside at General Conference but do not have a vote. However, the Book of Discipline, the denomination’s law book, gives bishops the authority to convene various church gatherings — including special sessions of General Conference and jurisdictional conferences.

Still, there has been debate about whether new bishops can be elected before General Conference, which sets the denominational budget that determines the funding and thus the number of United Methodist bishops.

On April 30, Harvey said the bishops affirmed their interpretation of the Book of Discipline that colleges of bishops (that is, the bishops in each jurisdiction) can call special sessions of jurisdictional conferences at any time “but not for the purposes of electing members of boards and agencies nor to elect bishops.”

She repeated this statement twice.

The five U.S. jurisdictional conferences and their counterparts — the central conferences in Africa, Europe, and the Philippines — deal with more than elections. Among other responsibilities, they also set the numbers and boundaries of the annual conferences — church regional bodies — within their borders.

For example, the Tennessee and Memphis conferences have plans to merge into the new Tennessee-Western Kentucky Conference by January 2022. However, they need the approval of the Southeastern Jurisdiction for the merger to take effect.

It is unclear whether the Southeastern Jurisdiction’s college of bishops will call a special meeting.

However, with the 2022 jurisdictional dates on the calendar, central conferences can now set dates for their meetings to elect their allotted number of bishops and agency board members. At present, eight central conference bishops plan to retire. Delegates also plan to elect a successor to Sierra Leone’s Bishop John Yambasu, who died last year in a car accident.

Throughout the open parts of their meetings, bishops acknowledged they were leading in unprecedented times.

The Virginia Conference’s Bishop Sharma Lewis, who led the morning’s devotions, outlined some of those challenges, including the pandemic, the deaths of Black and brown people at the hands of police, and the denomination’s expected split. She preached on Colossians 3:12-17, which calls on Christians to clothe themselves in compassion, kindness, humility, gentleness, and patience.