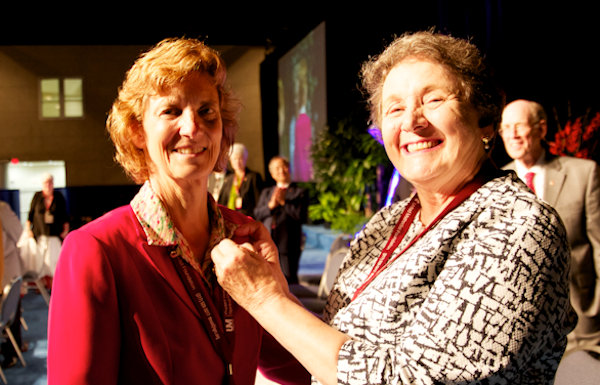 JULY 14, 2016 | PEORIA, Ill. (UMNS) The Rev. Laurie Haller of the West Michigan Conference was elected by the North Central Jurisdictional Conference on July 14.

Haller currently serves as the Senior Pastor of Birmingham 1st United Methodist Church, Detroit Conference. She was elected on the 13th ballot with 132 votes.

“I am the first bishop ever to be elected with a visible black eye,” she said addressing the body after election. “I got it from a stray piece of airplane luggage and decided not to cover it up. It reminds me that I offer myself in utter transparency, honesty and vulnerability.” She continued, “It reminds me of all who live under oppression and those with wounds so deep that no one knows they exist.”

Balloting that could have stretched through the day suddenly came to a close at noon on Thursday after a series of gracious concessions. First to step aside, before the initial ballot of the morning, was the Rev. Kennetha Bigham Tsai, also of West Michigan. Quoting Native American Ray Buckley, she said, “Let us call ourselves the nothing in between people. That is my hope for the UMC.” Two nominees from Iowa–the Rev. Dr. Lillian Gallo Seagren and Rev. Dr. Barrie Tritle—soon followed. Then came the Rev. Dr. Gary George (East Ohio) still strong in vote-getting, who stepped aside saying, “I leave you with three things. Hold on to Jesus Christ. Hold on to one another. Reach out for the sake of the gospel and transform the world.” The Rev. Sylvester Weatherall (Illinois Great Rivers) delegates for their support with a gracious and resounding, “God is not finished with us yet!” Haller’s election followed.

Nichea Ver Veer Guy, Chair of the West Michigan Delegation said, “I am excited that everyone else now gets to discover the Laurie Haller we all know and love. I am just so proud of the way she and all the delegates have handled this is such an example for us.” Wayne Bank, lay delegate from Detroit added, “I was with Laurie on a 900 mile bike trip for Imagine No Malaria and every person she met, she wanted to listen and hear their story, share Jesus love and build community.”

“I think Laurie brings an amazing depth of spirituality,” said Alex Plum, another of Detroit’s lay delegates. “It is not enough for us to rely on politics or look at the divisions, if we are going to have true unity that only comes in Jesus Christ. Laurie’s commitment to Christ is the promise she brings to this church.”

The new bishop is the latest in a series of women elected from the West Michigan Conference, beginning with the historic consecration of Bishop Marjorie Matthews in 1980. Matthews was the first woman to enter the episcopacy of The United Methodist Church. Bishop Sharon Zimmerman Rader was then elected in 1992 while serving as Superintendent of the Grand Rapids District. In addition, Bishop Linda Lee, of the Detroit Conference, was elected bishop in 2000 with endorsement by the West Michigan Conference.

Haller was carried by the endorsement of the combined Michigan Area Delegation to General and Jurisdictional Conference. She, along with the Rev. Kennetha Bigham-Tsai, received a vote of acclamation at the 2016 West Michigan Annual Conference.

Haller’s election completes the process in Peoria that brought four new bishops into The United Methodist Church. Others elected by NCJ delegates on July 13 were the Rev. Dr. Tracy Smith Malone (NIL), the Rev. Dr. Frank Beard (IN), and the Rev. Dr. David Bard (MN).

The four will be consecrated at Peoria 1st UMC in a worship service held Saturday, July 16. The North Central Jurisdiction’s Committee on the Episcopacy will now begin meeting to determine the assignment of all nine NCJ bishops for the coming four years. The newly-elected leaders will begin ministry in their Area on September 1.

Pastoring in Michigan since 1982, prior to going to Birmingham 1st she served six years as a Superintendent of the Grand Rapids District and was co-pastor with her husband, Gary, of Grand Rapids 1st UMC for 13 years. Rev. Haller served as a director of the General Board of Higher Education and Ministry from 2000-2008 and is currently a Trustee at Garrett Evangelical Theological Seminary.
Rev. Haller is married to Gary Haller, an elder in the West Michigan Conference.  They have three young adult children and two grandchildren. Rev. Haller is an avid long distance runner, cyclist, triathlete, golfer and hiker. She also loves classical music, reading, traveling and prayer walking.

-Kay DeMoss is the Senior Editor-Writer for the Michigan Area