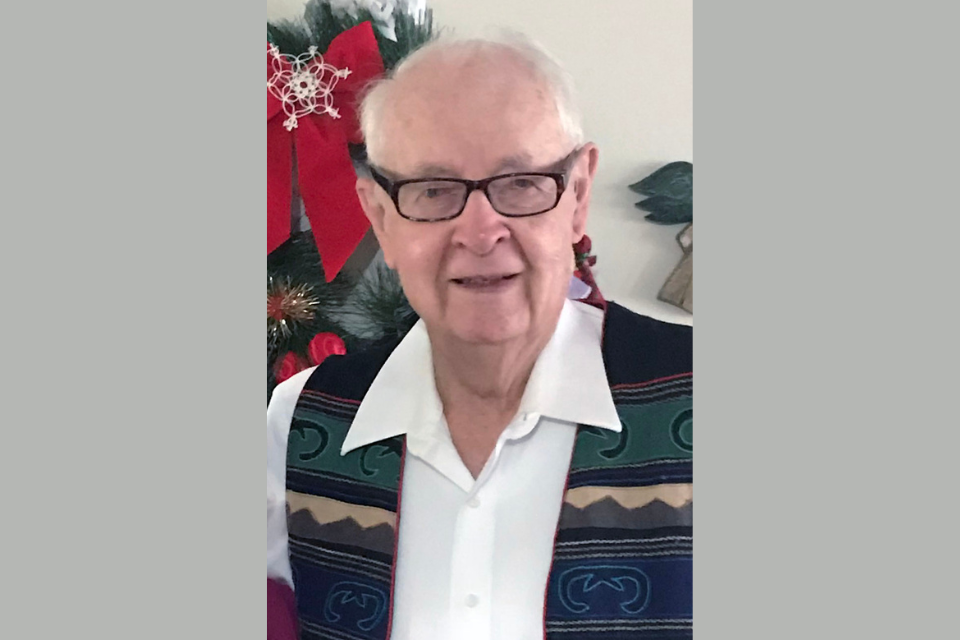 The Rev. Mel West, founder of Mobility Worldwide, reflects on growing up in rural Missouri and how the trinity of family, farm, and church shaped his life and faith as a United Methodist.

I first entered a Methodist church building in the autumn of 1923, in my mother’s womb. On May 21, 1924, Dr. C. R. Boone pulled me into visible existence in the southeast bedroom of our farm home eight miles from Golden City, Missouri. Two weeks later, my parents presented me—wearing a gown made by my Presbyterian grandmother—to the congregation of the Golden City Methodist Church and signed my name on the cradle roll.

That began a life lived under the trinity of family, farm, and church. One could not think of one without considering the other two. Saturdays were spent getting ready for church, doing chores in advance, putting down hay early, taking baths, making certain clothes were ready, cooking food ahead of time, and, of course, studying our Sunday school lessons.

Sunday morning was a flurry of finishing chores, shutting off the windmill and dressing in our Sunday best. To be in the “house of the Lord” for worship meant Dad in suit and tie, Mom in her best dress and gloves, and my brother and I in our Sunday clothes of the season. The rule was, “Wear the best you have, as long as it is clean and mended.”

Sunday school began at 9:30, with a basement full of children. A side room served youth classes, and the sanctuary held two adult classes. At 10:30, we all met in the sanctuary. In quick succession, each class reported their attendance and a one-sentence lesson summary. Sunday school attendance, usually around 90, was put on the wall “scoreboard.”

At 10:45, the sanctuary went silent, except for the pianist playing music to encourage quiet contemplation. People went into the basement or outdoors to chat. Those coming for worship sat quietly. The rule—from Habakkuk 2:20—was: “The Lord is in his holy temple; let all the earth be silent before him.” The choir gathered in the basement, and the sanctuary began to fill.

Promptly at 11, the church bell rang, the doors to the basement opened, and the choir and pastor marched in singing “Holy, Holy, Holy.” Worshipers stood and joined in. I cannot overemphasize the feeling I had as a child and young adult. Indeed, I felt as if I were standing on holy ground, in God’s house, and surrounded by goodness and love.

The first line of my memoir states, “No child ever born upon this earth had a more idyllic childhood than did I.” Everyone worked together to prepare me for a worthy life. Each Sunday after church, we usually went to a grandparent’s home for dinner. I realize now that the great food was less important than the mentoring received.

My Grandfather and Grandmother Bawbell were Presbyterians and lived on a farm six miles from town. If we went there, my folks would stop by their church, three blocks away, and let my brother, Olin, and me ride to their farm in their Model A Ford. Dinner was prepared. My grandfather’s table grace was, “Our Father, we are thankful for this expression of your goodness to us. Bless this meal to its intended use and us in thy service.” (Barbara and I met at the Methodist-related Hendrix Hall in Columbia, Missouri, 80 years ago, and used that blessing at our first meal as a married couple—and continue to do so.)

On one visit, my Grandpa Bawbell said, “Melvin, you are 12 years old. I have seen boys 12 years old smoking. You will have to decide whether you will or not. We cannot stop you. But I want you to know three things:

“First, it is an expensive habit.” He had figured out what it would cost me to smoke a pack a day the rest of my life. My common sense told me I did not want to spend that kind of money. “Second,” he said, “it is a nasty habit.” I had seen spittoons and cigar and cigarette butts all around, and I did not want to litter the world. “Third,” he said, “it will destroy your health and may kill you.” I had seen folks sick with lip cancer and lung disease and did not want that.

Throughout my life, I have applied the logic of that discussion, along with my church’s teaching that our body is God’s holy temple. I’ve never touched cigarettes, alcoholic beverages, or harmful drugs. I still drive, walk a mile a day, and tend a big garden.

Once a week, our family went to Golden City to sell eggs and cream, and purchase needed items with our earnings. In cold weather, we took the furs from animals that I had caught. In the winter, I also sold gutted rabbits to city restaurants. Going-to-town day was very special for me, and I always took the little black “bank book” my Grandpa West had given me.

When we arrived in town, Dad let me out at the east end of town, and I visited friends and businesses along Main Street. But I always got to the Collins and Sweat Ford shop where my Grandfather West worked well before 3, when the bank closed. In due time, my grandfather would say, “Melvin, if I gave you two nickels, what would you do with them?” I knew the answer. “Grandpa, I would save one and spend the other.” It was our personal ritual.

He gave me two nickels, and I headed for the bank. I slapped that nickel and my bank book on the marble counter, and George Koltermann, bank president, entered my 5 cents in the book, as serious as if it were a thousand dollars. Then he would say, “Melvin, that is really adding up. Now, you are going to college with that, aren’t you?”

Then I got a cup of water from their fountain and left. Think of the boy who stepped down those three steps from First National Bank. “I have money in the bank. The bank president is a personal friend of mine. And I am going to college.” In 1941, I did, indeed, take that money to the University of Missouri, along with money from trapping, raising animals, and working for neighbors.

Church, family and community, and farm—that trinity of forces—were at work, encouraging me to be the very best I could be. Together, my border collie and I roamed the prairie and woods, fished in a mile-long creek, chased geese, rode pigs, and danced with lambs. We were in the midst of the Great Depression, bank closures, the Dust Bowl, and massive insect invasions—occasions to learn survival techniques, creativity, and determination.

The Heyday of the Church

Religion and evangelism were popular. Surveys reported that many people said they believed in God, read the Bible, prayed, and attended church services. Most churches had at least one annual revival. The church was filled for Sunday-to-Sunday evening religious services to inspire active members and gain new converts. Campground meetings were popular. In early autumn, before harvest time, families camped for the week to participate in ecumenical Bible study and training and to hear preaching.

Denominational camps were also popular. Many conferences owned several camps with permanent buildings, usually situated near a lake. They were open in the summer and fall for children, youth, and adults.

Ecumenism was strong. My hometown had an active ministerial alliance with Disciples, Baptist, Catholic, Methodist, and Presbyterian leadership involved. Special events for Easter and Christmas were done cooperatively.

Most town churches had resident pastors with a parsonage next to the church. Village churches usually had local full-time pastors living in the community. Pastors often gave a prayer or a benediction at public events.

National and regional ministerial alliances were common, and radio programs featured popular preachers. “The Lutheran Hour,” a weekly radio program, began in 1931 and gathered a following of millions.

On that foundation, I built a rewarding, exciting, and productive life. I have been a dairy farmer, a trapper, a U.S. Marine, a candy maker, a teacher, a pastor, and a humanitarian. Together, Barbara and I have lived a life inspired by our churches almost 100 years ago.

West, a retired United Methodist pastor, lives in Columbia, Missouri. The founder of Mobility Worldwide, he has been honored for his commitment to humanitarian work. Mobility Worldwide is an EngageMI Ministry Partner. To learn more, contact one of the Michigan affiliates.