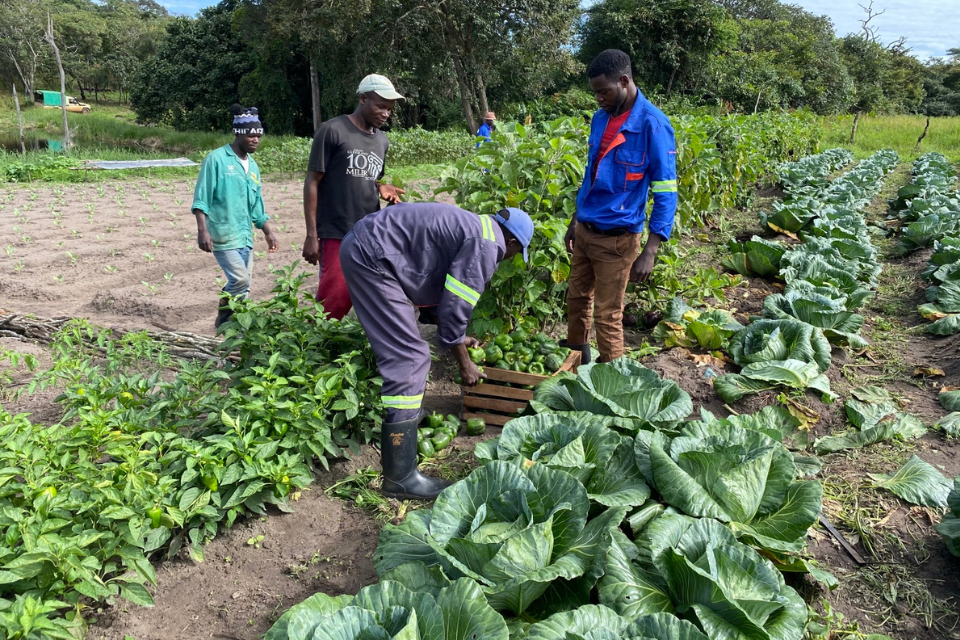 The Mujila Falls Agricultural Center has seen success in introducing and growing certain types of vegetables. Cabbage, which goes along well with the main starch (Nshima), is usually accepted by the community, while rhubarb/beetroot are not. Experiencing local food has helped the missionaries develop cross-cultural understanding. ~ photo courtesy Temba Nkomozepi

At the Mujila Falls Agricultural Center in Zambia, there is a critical relationship between the food that is grown and raised and the mission work done in the community.

Mission and food are inseparable, and the interaction between them is inevitable. A study of the early Church in Corinth found that sharing food was significant as a way to show love and helped to displace former conceptions which tolerated inequality and uneven distribution (Blue, 1991).

Often, missionaries would have to give out food to the poor after delivering sermons. Instead of giving out food, many missionaries introduced and demonstrated new techniques to improve the local agriculture. From as early as 1822, in the tribal hilly areas of Odisha in India, a group of missionaries introduced the sloping agricultural land technology which allowed locals to sustainably grow crops and harvest good yields on steep slopes, which was previously attempted without success (Nayak, 2018). In the 1920s, Emery Alvord, an American missionary, successfully promoted the use of the plough and integrated crop-livestock farming in Zimbabwe. More recently, another agricultural missionary, Brian Oldrieve, through Foundations for Farming, is a proponent for a technique known as conservation agriculture based on crop rotation, minimum-tillage and retention of crop residues (Baudron et. al, 2012).

The Mujila Falls Agriculture Center (MFAC), a United Methodist Church mission center also promotes and demonstrates good agriculture practices and works to promote rural development. This purpose of this article is to present the fusion of mission and food from the perspective of us at the MFAC.

The Mujila Falls Agriculture Center lies in a typical rural area at about 50 km away from a small district town called Mwinilunga in the North – Western Province of Zambia in Southern Africa. (11°29’34.8″S 24°48’27.6″E). The region is predominantly occupied by the Lunda people. The area receives high rainfall and has high temperatures that are suitable for most crops and livestock.

The project started in 1999 when its founder, Rev. Paul Lee Webster, was evacuated from Musokatanda in the Democratic Republic of Congo following civil strife. The project’s motto is derived from the second part of John 10:10 that says, “I have come that they may have life, and have it to the full.” The initial objectives were to increase access to food with high protein and vitamin content, but later morphed to include rural and church development.

The interactions of mission and food at the MFAC have been multifaceted as a result of the diverse skills of the missionaries and the circumstances surrounding the formation of the project. One of the biggest successes to date has been the teaching and demonstration on growing maize. Despite that maize is the staple in Zambia, cassava is the staple food in the vicinity. For years, locals had been unsuccessfully trying to farm maize without much success. It was only after training and demonstration on critical factors such as seed selection, land preparation, weed control, and harvesting that the yields grew and more people were encouraged to cultivate maize as a cash crop. Over the years government also increased support in input supply (subsidies) and marketing.

Mujila has been successful in providing fresh milk and eggs. The project provides the community with over 80 liters of fresh milk and between 1,500 to 2,700 eggs per day. The eggs are sold at an affordable price, while the milk is distributed free of charge as a response to the need and requests from several health practitioners. Efforts to have the local farmers produce their own milk and eggs are hindered by lack of access to improved cattle and chicken breeds, poor road network, support services and lack of funds for investment.

On the other hand, introducing the use of animal draught power was not adopted much because of the high entry cost barrier. Even those who can afford cattle rear them long distances away from their homes and fields. Similarly, experience has also proved that vegetables or foods that go along with the main starch (Nshima) such as cabbage are usually accepted, whilst those that do not like rhubarb/beetroot are not easily adopted. Experiencing local food has helped the missionaries at MFAC to develop cross-cultural understanding and intelligence (Sterkenburg, 2013).

MFAC does not only help with food practices as practical decisions influenced by nutritional needs but sometimes in ways that are fundamentally social or cultural (Reddy & van Dam, 2020). An example is how the Mama Roxanne Day Care center was introduced as an intervention for child safety and protection.

The mission center received reports of incidents where minor children under the watch of older siblings would injure themselves trying to heat or prepare food. In most cases, the mothers who are normally the primary caregivers to children would be out preparing cassava flour. Processing cassava has not changed much over the last few decades; it is laborious and time consuming which involves soaking, chipping, drying, and pounding (Alamu et al., 2019).

On the surface, it is unclear why families prefer to use the old ways to process cassava, also why they chose cassava to be a food security crop and maize to be a cash crop. Key informants have revealed that the reasons are largely traditional and are also linked to the status of a wife or family. It is against this background that MFAC started a day care center where children between the ages of 4 and 7 can be looked after while receiving basic education.

Similarly, MFAC has also strengthened local congregations by providing opportunities to the church and church members through employment or income generating agricultural projects. The work done at Mujila provides a platform where people who gather for any program such as training and employment can be part of religious services led by missionaries. The advantage is that it makes it possible to reach to people who would not normally respond to an invitation to church.

Overall, the interactions of mission and food at MFAC are complex, and the approach is distinctive because of the diverse skill set of the missionaries and the uniqueness of the local area. Food provides a platform for exchange because it can be used to mark religion, ethnicity (or tribe), and gender (Bonnekessen, 2010).

Furthermore, understanding the food value chain; what a society eats; how it is produced and processed, how it links to tradition and status can also help mission centers to bring much needed interventions such as the Mama Roxanne Day Care Center. On one hand, the missionaries train and demonstrate how people could possibly eat better and earn a little more, while on the other, they also teach how people may have life, and have it abundantly!

Temba Nkomozepi is a Global Ministries missionary and an agriculturalist at Mujila Falls Agriculture Center in Kanyama, Zambia. He is one of our Engage MI missionaries.

This article was originally published on the UM & Mission blog. Used by permission.