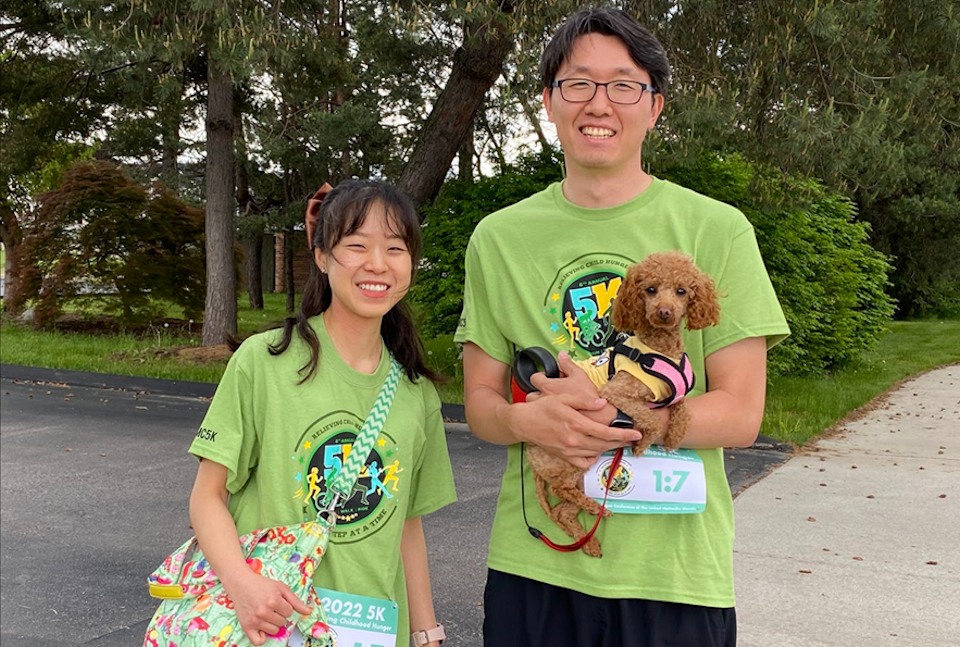 Members and friends of Troy Korean UMC took to the sidewalk again this year for a monumental 5K effort against child hunger. They raised $11,219 on May 22, 2022. ~ photo courtesy Jinny Song/Troy Korean UMC

Two events at this year’s Annual Conference raised money for good causes: A hybrid 5K, allowing participants to walk, run, or ride from home, raised almost $21,000 to reduce and eliminate child hunger in Michigan, and a golf scramble raised almost $1,000 to support United Methodist campus ministries throughout the state.

Members of Annual Conference spend a lot of hours seated in an assembly hall. However, there are also opportunities to get muscles moving for a good cause.

When The Michigan Annual Conference moved to the Grand Traverse Resort in Acme, MI in 2017, planners took advantage of the setting to offer recreational activities with a purpose. For three years, a 5K – Walk, Run, Ride—raised dollars for disaster recovery and relief in Haiti and Michigan. Campus Ministries got a financial boost from a golf scramble.

The pandemic in 2020 and 2021 transformed the 5K into a “virtual” event … to be done anytime and anywhere a participant chose to do it. The golf scramble went on hiatus during COVID-19.

Last year’s virtual 5K introduced an important new initiative of The Michigan Annual Conference. Child hunger in Michigan has been a concern long before today’s inflation sent the price of groceries skyward. So, in 2021, The Michigan Annual Conference began serious efforts to feed the estimated half a million children who go to bed hungry. The 2021 5K for Hunger Relief raised $54,396 which was distributed among ten food related organizations that reach every county in the state.

The sixth annual 5K was a hybrid event. Folks walked and ran the course at Grand Traverse Resort on Thursday, June 2, 2022. Others got in motion with friends, family, and pets at various places around the state for large-scale group efforts.

Rev. Jinny Song, a deacon serving Troy Korean United Methodist Church, reports that the congregation raised $11,219 in an event held on Sunday, May 22. Song estimates that some 200 people contributed in some way to that incredible total. The opportunity to help those struggling with food scarcity was highlighted in worship and prayer time. T-shirts were available at a table along with a collection box for those who wanted to share without physically running. “There were small groups having picnics that day,” Song said. “They got T-shirts and walked the 5K together.” Other families did the walk from home.

Song thanks Nancy Arnold, The Michigan Conference’s 5K organizer, who hand delivered the T-shirts and whose counsel “was a big part of our success.” The deacon found joy in assisting the church’s Mission Team in preparation for the 5K. “My heart is always with the children,” Song stated. “The pandemic opened our eyes to children right here in our own home state, who are going without food. It is not enough to pray for them. We must take action.”

Registrations for the onsite 5K event in Acme raised an additional $4,420. Members attending conference donated another $2,293.

Southfield Hope UMC hosted a 5K on Sunday, June 5. Senior Pastor B. Kevin Smalls reports that around 20 persons of all ages biked, jogged, and walked that afternoon to raise $3,000. “I am grateful,” Smalls said, “for the missional heart of the church and for the Rev. Dale Milford who organized the effort.” Smalls noted that 5K participants wore their T-shirts in worship and showed great enthusiasm. “This is the second year doing this,” Smalls added. “I am proud of how we responded as these times are not easy. Hope UMC bounced back very well to help eradicate and reduce child hunger.”

So as of this writing, the 2022 5K has raised $20,932. The Rev. Kathy Pittenger, Coordinator of Children’s Initiatives for The Michigan Conference, has provided Michigan United Methodists with a list of creative ideas that could engage persons of all ages throughout the summer. The goal is to equal or better last year’s total, and donations are still being accepted via this page.

Teeing up for students

After a two-year hiatus, conference members picked up their golf clubs once again in 2022. Registrar for the Division of Higher Education and Campus Ministry (DHECM) Golf Outing, Richard Burstall, reports that 34 persons participated in the 10-hole scramble. The Rev. Jeff Williams, Michigan Conference Higher Education and Campus Ministry, reports that $934 was raised to benefit the eight active United Methodist campus ministries in Michigan. Learn more here.

Williams explains, “Given the time frame of Conference opening at 1 pm on Thursday, this year we played a 10-hole tournament instead of the 18-hole format of earlier years. We have golfed on the Spruce course at Grand Traverse Resort each of the four years [conference has been hosted there].” Williams continues, “The staff at Grand Traverse are outstanding in running a professional golf outing for us.” He expressed appreciation to Richard Burstall for organizing this event each year.

Williams reports total receipts (2017-2022) of $6,366. He remarked, “These funds are a portion of a $5,000 annual DHECM goal to raise dollars in addition to Ministry Shares. We are grateful for this playful opportunity to support our campus ministries that serve the most concentrated population of young adults in our culture.”

Referring to the Vision of The Michigan Annual Conference, Williams concluded, “We are inspired by the creative and faithful work our campus ministries do in nurturing bold and effective young adult spiritual leaders.”

John Wesley once said, “Beware you be not swallowed up in books. An ounce of love is worth a pound of knowledge.” Methodism’s founder would surely say to all Michigan Conference golfers and 5K participants, “Well done, faithful servants.”