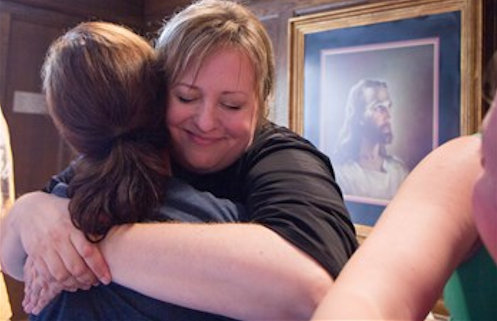 In the midst of a massive clean-up, residents paused Sunday morning to do what they've always done at First United Methodist Church of Denham Springs, Louisiana - pray, sing and worship. "I think one of the most beautiful words in all of scripture is the word 'through'' said Rev. Jackie King. "Think of how Psalm 23 would sound without the word 'through'. 'Even though I walk through the valley of death'. Notice David didn't say "even though we walked around the valley of death.' Friends, God will see us through this." ~photo Louisiana UMC

It is Saturday, August 20th and it is raining…again.

It was about this time last week when the rain just wouldn’t quit.  “Rain, rain, go away, come back another day.”  But it was not to be.  In two days, we received 6,000,000,000,000 gallons of water– yes, SIX. TRILLION. GALLONS of water; enough to fill 6,000,000 Olympic-sized swimming pools.  There has been little “normal.”  School will begin in East Baton Rouge parish next Wednesday and in the parish most greatly impacted – Livingston Parish – the headline on their school district website simply reads – “No school until further notice.”  We received our first piece of mail yesterday.  Our phone service has been spotty – at best.  We are still under mandatory curfew.  As of Wednesday, over 4,000 people remained in shelters after 30,000 rescues.  40,000 homes have been affected so far.  In some communities that represents over 80% of its residents.

I have described this storm as Katrina without the wind.  I spent the last two days visiting churches, pastors and residents.  Some areas were still impassable but we wove our way around and were able to connect with some of our good folks who were busy responding the best they could.  When 80% of your community is affected the response is difficult.  The area with the greatest number of trained Early Responders is the area that is 80% under water.

I have seen my share of disasters and each time I am shocked at the damage caused by water.  How in the world does a piano get turned upside down? Or a freezer that was in the utility room end up on the other end of the house?  Open-top dumpsters carried by rapid river-like currents for miles and landed on top of cars at a car lot.  A car sliced in half when the motor of a rescue boat makes its way down a street where the flood waters are so deep they have no idea there is a car underneath them.  It is like Atlantis!

Assist those suffering from the deluge in Louisiana with gifts to the United Methodist Committee on Relief U.S. Disaster Response Advance # 901670.

There is flooding from too much rainfall but we experienced something completely different.  Cities and towns in South Louisiana are built around rivers, canals and bayous all of which flow out and toward the Mississippi River and the Gulf of Mexico.  So, when 6 trillion gallons of water falls in two days, the rivers overflow their banks, that feed into the streams, that feed into the bayous.  This is the reason the flooding is so widespread.  As the water moved, it took people’s homes, pets and possessions with it. These floodwaters are not just clear rainwater, they are mixed with river water, sewage, mud, mud and more mud.  And oh the smell!  The smell from rotting food in refrigerators, sewage and gunk.

It was not until Tuesday that Interstate 12 opened between Baton Rouge and New Orleans and portions of Interstate 10 remained closed until Wednesday.  This prevented any traffic to move which meant a simple loaf of bread became a coveted possession.  I was in a church on Wednesday and someone had found ONE loaf of bread in the entire town.  There were cheers for the loaf of bread.  This also made the movement of relief workers very difficult.  Most people were not able to get to their homes until Wednesday.  Think again about the smell of your prized possessions after sitting in your water soaked home for almost six days in 90-plus degree weather.

This is a disaster of epic proportions and unfortunately national news has focused more on Lochte’s tale in Rio than the Rios we have experienced.  The recovery will be long and very hard and we’ve yet to fully grasp the long-term impact to our cities, towns, economies and our churches.  Thankfully, only about a dozen United Methodist churches were damaged but several parsonages are included in the thousands of flooded homes, many of which did not have flood insurance. Who would have thought they needed insurance – they were not in a flood prone area?

We experienced a 1000-year rain in two days.

Yet, even in the midst of the life shattering experiences of the last week – we see signs of hope.  We see neighbor helping neighbor.  In Baton Rouge, where just weeks ago racial tensions were at their height, we have seen floodwaters cross every racial and socio-economic barrier.  We have witnessed black police officers carrying white citizens through floodwaters and white police officers carrying black citizens to safety.  Just yesterday, I helped one of our African-American churches distribute lunches to black, white and Hispanic people in need.

So, while we aren’t making front-page news, we know we are Louisiana Strong and our United Methodist Connection is strong.  This is when we are at our best.  We have received emails, calls, texts, Facebook messages from United Methodists all over the world.  We will need your ongoing support in the days, weeks, months and yes, even years ahead.  We are preparing to receive teams in the weeks to come.  For now, your prayers and your financial contributions will go a long way toward recovery.

I rely on the words of the prophet Isaiah, “Don’t fear, for I have redeemed you; I have called you by name; you are mine.  When you pass through the waters, I will be with you; when through the rivers, they won’t sweep over you…you are precious in my eyes, you are honored and I love you.”