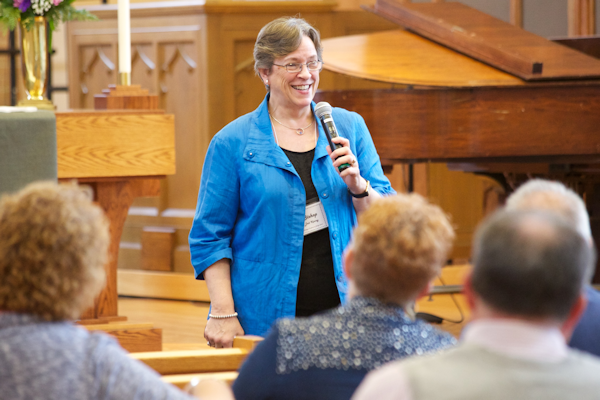 Bishop Deb shares with those assembled in Saginaw on January 30. Count Day is past. The Design Team is at work. It's now time to listen. ~MIC photo/Mark Doyal

The Area Design Team, charged with creating a plan for a single annual conference in Michigan, is co-chaired by Rev. Dr. Glenn Wagner and Rev. Marsha Woolley.

“I am glad that we are beginning our tour here,” Wagner said at the session’s outset. “Saginaw is said to be a city with a high concentration of patent holders. So in a city known for creative ideas and innovation, we bring you something innovative and new!”

Wagner also announced the Design Team’s unanimous decision to name the new body, “The Michigan Conference.” The proposed name was included in a motion to realign the conferences, submitted to the North Central Jurisdictional Conference for consideration at their meeting to be held July 13-16, 2016 in Peoria, IL.

Bishop Deborah Lieder Kiesey shared a brief overview of the journey so far, from her initial listening tour around the state through the historic vote to become one, announced on June 10, 2015 at the Area Center in Lansing. A summary was also presented of the Design Team’s work since September, 2015.

The remainder of the morning was spent in small groups moderated by members of the Design Team. Feedback on the proposed new Vision Statement for The Michigan Conference was received from the laity and clergy in attendance. Concerns heard most often: “Bold, effective leadership”; “Vital congregations”; and “Christ-centered mission and ministries”. Anxieties and hopes for a new conference were also expressed. All input from this and subsequent sessions will inform the Design Team’s work.

Detailed notes from the conversations will soon be posted at Design.MichiganUMC.org.

The Rev. Benton Heisler, Director of Connectional Ministries for the West Michigan Conference, gave a helpful overview of next steps for the Design Team’s work and the process of forming the new conference.

The Listening Session ended with Holy Communion officiated by Bishop Deb. The celebration reminded all present of the centrality of God’s love in Jesus Christ.

The next design team listening sessions are listed here. Click the church name for travel directions.

News of the journey toward one conference may be followed at http://design.michiganumc.org/. Regular updates will also be included in MIConnect, the weekly electronic newsletter of The Michigan Area; subscribe online at http://news.michiganumc.org/.

Ongoing communicate with the Area Design Team is possible at any time using the email address DesignTeam@MIareaUMC.org.

~The Revs. Glenn Wagner and Melanie Carey contributed to this report