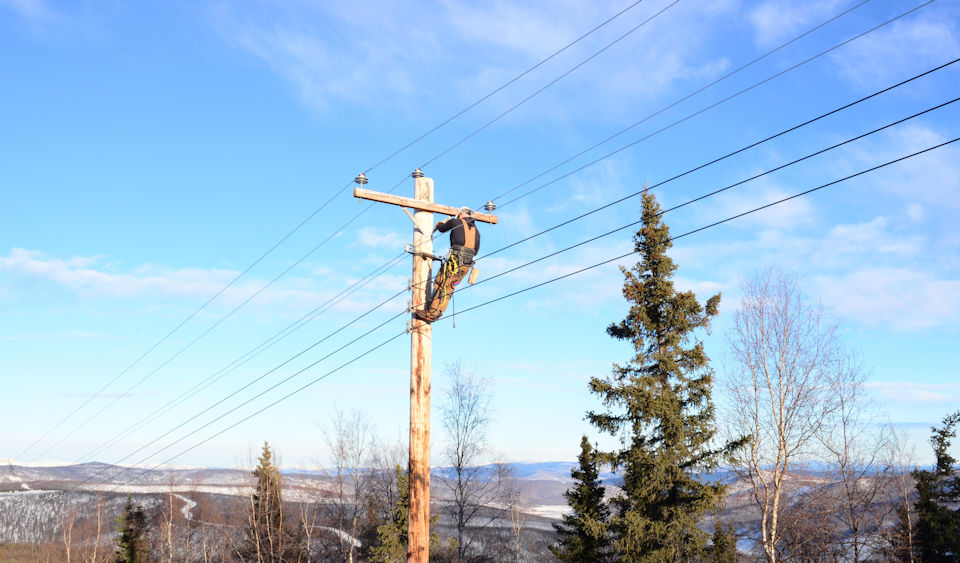 The Rev. Glenn Wagner calls Jesus “a lineman,” and invites us to grasp the power of Christ’s sacrificial love and  revolutionary practice of forgiveness.

Lines. There are important lines in history that have evoked measurable consequence when stepped on or across. Do you remember these lines?

Lines divide people by age, gender, economics, politics, culture, religion, knowledge, and language. I am aware when watching the television game show “Jeopardy” with my family that there are entire lines of inquiry particularly concerning music, literature, and entertainment of more recent vintage where my children are fluent, and I am completely ignorant.

You may also have noticed that there are powerful lines separating perspectives aired on television and radio networks which are discernable just by listening to how these networks cover the same news. Tune in for 20 minutes on any given night to FOX news and alternate between their pundits and those covering the same headline stories on MSNBC or CNN. It is usually clear that they are dishing their stories to constituencies with very different political tastes. Pick any issue and chances are that you can get a fuller picture of the pros and the cons in the debate by alternating channels. Mention our President, gun violence, immigration, tax policy, women’s reproductive rights, LGBTQ rights, and gas vs. electric vehicles and the clear lines of difference between us emerge in any group of persons.

Religious history remembers the lines between Gentile and Jew, Catholic and Orthodox, and Protestant and various sects. Globally some lines divide not just the Christian differences but also define the boundaries that separate adherents of other major world religions.

I will never forget the illuminating conversation I had at an interfaith gathering on the sacraments following presentations given first by a respected Roman Catholic scholar concerning Catholic beliefs on the sacrament of communion. That presentation was followed by another lecture given by a revered Greek Orthodox priest who spoke about Orthodox beliefs concerning Holy Communion. Afterwards, I was able to have a private conversation with the Orthodox priest. “Father, thank you for your wonderful presentation about Holy Communion. I couldn’t help but notice the many similarities between your understanding of the sacrament and the views that were expressed earlier by our distinguished Roman Catholic presenter. If I had closed my eyes and didn’t know who was presenting, I would have thought you believed the exact same thing and were representing the same church. So, if a Roman Catholic came to your Orthodox Church for worship, would he or she be welcome to receive communion at your table?”

His unexpected response to me was instant and straightforward, “Absolutely NOT!” The Orthodox priest was very aware of a line separating the believers of the two denominations stretching back to April 12, 1204 when Catholic Crusaders sacked Constantinople and opened a wound that is still remembered. Like a buried power line not visible to most of us, the Orthodox priest carried inside him the living awareness of that live line that he was not willing to cross.

I do believe that the observation of Roger McNamee in his book, Zucked, about Facebook and social media, is true when he noted that we are separating ourselves as a people into self-selecting and insulated information bubbles and prefer to live inside the protective bubbles where we hear only from like-minded individuals who agree completely with our particular sense of orthodoxy.

McNamee also notes that statistically, controversy and difference of opinion on social media get far more attention from the onlookers than mutual affirmation and agreement. He observes the irony that most of us demonstrate an appetite for friends who agree with our point of view, but we are more likely to pay attention when fireworks are involved in the exchange.

This irony may also be why researchers like the Roslings, in their informative book Factfulness, report on hard data that living conditions for many people in our world are dramatically improving while the faulty public perception persists– that is based not on the facts but on feelings generated by dramatic news headlines about traumatic events on the planet– that things are growing steadily worse.

One of the reasons that I am attracted to Christianity and am a devoted follower of Jesus is that the Gospels remember Jesus as a lineman. Jesus spent his life addressing our great human divides. His message of grace, his example of sacrificial love, his exercise of compassion, his revolutionary practice of forgiveness, and his embodiment of hope are still powerfully at work bridging the dividing lines that continue to separate the human family.

There is no doubt that Jesus was rejected by many who were threatened by his disregard for the dangers of crossing established lines. Jesus willingly affirmed marginalized Samaritans, ignored the laws by healing on the Sabbath, stepped across boundaries designed to protect ritual purity to eat with tax collectors, and spent time with lepers. The leaders in the synagogue of Jesus’ childhood went from publicly embracing him to absolutely rejecting Jesus when he made clear to them the line-crossing intentions of his mission. (Luke 4:14-30)

In several of his New Testament letters, the Apostle Paul affirms the inclusive nature of Jesus’ vision for the world.

In his letter to the Ephesians, Paul notes, “But now in Christ Jesus you who once were far off have been brought near in the blood of Christ. For he is our peace, who has made us both one, and has broken down the dividing wall of hostility, by abolishing in his flesh the law of commandments and ordinances, that he might create in himself one new man in place of the two, so making peace, and might reconcile us both to God in one body through the cross, thereby bringing the hostility to an end. And he came and preached peace to you who were far off and peace to those who were near; for through him, we both have access in one Spirit to the Father. So, then you are no longer strangers and sojourners, but you are fellow citizens with the saints and members of the household of God.” (Ephesians 2:13-19)

Jesus makes his desires for humanity clear in his pastoral prayer for unity among believers offered during the week of his crucifixion. “I also pray for those who will believe in me through their message, that all of them may be one, Father, just as you are in me, and I am in you. May they also be in us so that the world may believe that you have sent me.” (John 17:20-21)

I am not naïve. In a recent continuing education class sponsored by our local power company, we were told that being a lineman for the power company has historically been one of America’s most dangerous occupations. The same lines that deliver power to make our lives better can bring death when they are touched or crossed accidentally. Persons working as linemen for the power company receive extensive training and support in safety protocols.

Working to cross lines for Jesus can be just as dangerous.

“Around 215 million Christians face significant levels of persecution in the world today, according to the latest World Watch List from Open Doors. Researchers for the organization estimate 1 in 12 Christians live where their faith is “illegal, forbidden, or punished.” Last year 3,066 Christians were killed, 1,252 were abducted, 1,020 were raped or sexually harassed, and 793 churches were attacked.”

I have noticed that on almost any night of the week during prime-time television programming, you can find views expressed in news reporting or by leading sympathetic characters in popular dramas that are critical of Christianity.

I also know that loving in a faithful, line-crossing, and risk-taking way after the example of Jesus does not change or lessen our significant long-standing differences.

Willie Brown, a former Mayor for the city of San Francisco, shared an observation about the great diversity of his city during a workshop for pastoral leadership I attended there 20 years ago. He noted that diversity was both a strength of that city and a continuing challenge. There are over 150 different language groups attending San Francisco Public schools. Working to accommodate difference while promoting unity is an ongoing challenge. Brown noted, “We allowed the Gay Pride parade as a big deal in our city, but we disallowed that it be held on Easter Sunday past the front door of the Catholic Cathedral. Living together and celebrating our differences in a city of mutual respect is a continual challenge.” Brown also observed importantly, “In my experience, San Francisco is not a ‘melting pot’ where various cultural groups are assimilated, but rather a ‘tossed salad,’ where each group celebrates its unique heritage and identity and adds to the flavor of the whole with distinctness.” Mayor Brown helped me to understand that lines of difference between us rarely get erased, but they can be managed and affirmed for mutual benefit.

When it comes to the lines that divide the human family still, I am devoted to the work of Jesus who modeled for each of us how to affirm our shared humanity with grace.

Honestly, it can feel safer to dwell in the self-selecting bubble of like-minded people who share my preferences for political, cultural, and religious convictions but I know that Jesus wants us to work with love and grace on the dangerous dividing lines in order to reduce the tensions and improve the conditions of our shared humanity where Jesus makes it abundantly clear that God values us all. I have been blessed to study, travel, and serve in my ministry in many different settings with people who were not all just like me. I hope that I am a better person because I have been inspired and challenged by perspectives very different than mine.

I will be forever grateful for the two longest-tenured members of one of the congregations I have been privileged to serve as pastor. They both had deep roots in the community. Francis, the elder, was a staunch conservative on every issue of consequence. Bob was a flaming liberal and proud of his more progressive views. They were neighbors. Both were well read. They listened to different news outlets, they voted for different political agendas. Both lived right across the street from the church. They loved to argue with each other over coffee after church each Sunday and frequently tried to get me to choose the winner. They didn’t agree on any issue of consequence that I remember except that being together in community for them was more important than being right.

Francis, who had made his living in the manufacture and distribution of woolen blankets, made blankets for the homeless in his garage as a personal mission gift for distribution each Christmas. One year in his late 90’s disability prevented Francis from completing his charitable work. A call for volunteers was made at church so that the blankets could be completed and distributed. Guess who crossed the line to captain the compassionate effort? In Bob’s singular act of sacrificial love to assist Francis’ final act of devotion for Christ across the lines of their historic personal, political, theological, and social difference I experienced the power of Jesus that is greater than any of our divides.

God, help us all to live around the dividing and sometimes dangerous lines of our real difference with your commitment to love and the wisdom of your grace.