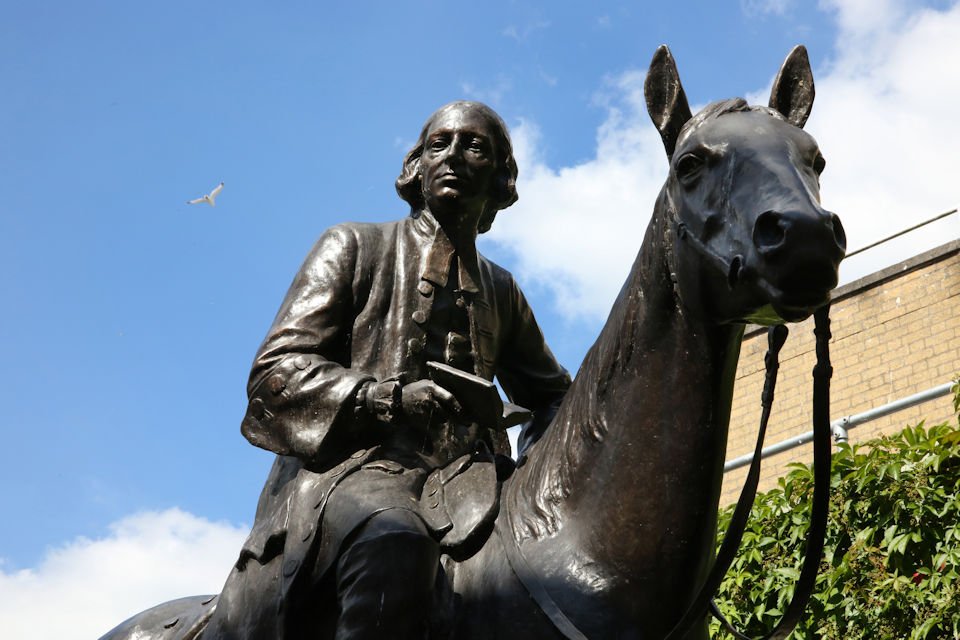 A statue of John Wesley on horseback is on display in the courtyard outside his chapel, The New Room, in Bristol, England. John Wesley lived in England,1703-1791, as a preacher, evangelist, and founder of the Methodist movement. ~ umns/Kathleen Barry

This is the second in a series, “Passing the Mantle,” featuring reflections of two pastors – one retiring and one being ordained at the 2019 Michigan Annual Conference.

The life of the early Methodists was built around the “Class Meeting”, those small groups where they nurtured their faith and kept each other accountable with the leading question, “How is it with your soul?” Faithful followers of John Wesley, the Rev. Dr. Eric Beck and the Rev. Eun Sik Poy both look at ministry through a passion of the soul.

Eric will be retiring from First United Methodist Church in Jackson, Michigan after 40 years of ministry. Though he did not grow up in the church, through the invitation of friends, he got involved at Mt. Hope UMC in Lansing as a teenager. A conversion experience at age 15 was the formative event which set him on the course toward ordained ministry. At the beginning it wasn’t clear where he should go but as others affirmed his gifts, he began to discern where God was leading. With that came a sense of calm and the assurance he was on the right track.

On the other side of the globe, the Rev. Eun Sik Poy, candidate for ordination as a United Methodist pastor, grew up in the Korean Evangelical Holiness Church. His calling had a clear missional quality. His desire was to preach the Gospel to those who need to hear as a missionary. He attended Bible College in Korea, then decided that if he was going to reach beyond the Korean community, he needed to speak more than one language and the best second language to learn would be English. He came to the United States and graduated from Asbury Theological Seminary. Now he finds himself in the “mission field” of Northern Michigan, serving the churches on the Boyne City circuit. Crossing cultures and sharing the Gospel with the world has been part of his ministry, empowered by his missional passion.

Eric would admit that ministry was not always easy. He faced some difficult challenges along the way, times when his own high expectations were not met and when things did not go as he anticipated. At one point, he found himself saying. “God, why am I here?” and it was as if God said, “I thought you trusted me?” Along the way, he always found strength in the affirmation of his congregations and the support of his family. He said, “There was always a voice inside and there was always the affirmation of church members who kept the sense of vitality alive in my life.”

Both Eun Sik and Eric have found ways to maintain their spiritual life and keep their calling alive. For Eun Sik that involves jogging in the woods and playing his saxophone. Both nature and the gift of music inspire him and feed his soul. For Eric it has meant maintaining an active prayer life and growing in his understanding of the Trinity as the center of his spiritual journey.

Eun Sik and Eric say they are well aware of the conflict in the denomination at the present moment, but Eric says he is still optimistic about the church and its future, “…because I know there’s always God. God is still with His people and will continue to be.” Eun Sik’s hope for the future is built around the denominational theme, “open minds, open heart, open doors.” He hopes the United Methodist Church can find its future by staying close to the Bible and focusing on Wesley’s doctrine of Christian Perfection, which is perfect love for God and all the world. He hopes to see the church become more multi-cultural and diverse, reaching others with the Gospel of Christ.

One of the events which was crucial to keeping Eric’s sense of call alive was a renewal leave. He said, “I wish it had happened soon and more often” and his advice to young clergy is, “Do it a soon as you can.” Eric identifies as an introvert and has always felt called to the inner life of the Spirit. The theme of his DMin study was “Building Koinonia Through The Practice of Common Prayer”, so his word to ordinands grows out of that experience: “Stay connected with colleagues, make your walk with God a priority, care for your family and let them care for you. If we don’t take care of our own spirits, no one else will.”

It is a way of asking the ancient class meeting question, “How is it with your soul?” John Wesley would understand. John Wesley approve.