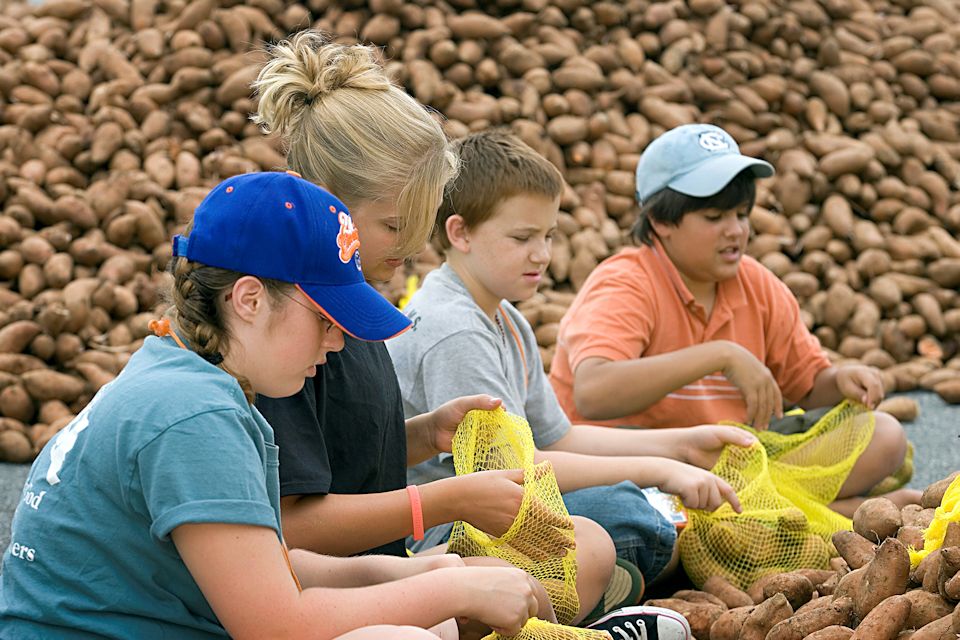 Leaving part of the harvest for God’s people dates back thousands of years. Today, the Society of St. Andrew continues that biblical practice.

“Two problems solving each other.”

That’s how United Methodist Chuck Parmele succinctly explains why he is a gleaner with the Society of St. Andrew (SOSA), America’s oldest faith-based organization created to share healthy food with those experiencing food insecurity and to reduce food waste.

“On one hand, you’ve got food that’s about to become wasted and you have hungry people who would love to get it,” explains Parmele, a retired engineer and a member at Concord United Methodist Church. “So, any place where food is about to be wasted, we want to know about it and intercept it.”

Founded by two United Methodist ministers in 1979, SOSA is named after Andrew, the apostle who helped feed the crowd of 5,000 by finding the boy who had the five loaves and two fish, as recounted in Matthew 14 and other gospels.

The concept of gleaning goes back even further with the first biblical mention occurring in Leviticus: “When you harvest your land’s produce, you must not harvest all the way to the edge of your field; and don’t gather up every remaining bit of your harvest…Leave these items for the poor and the immigrant; I am the Lord your God.” (Leviticus 19:9-10 condensed, Common English Bible)

Though United Methodist in origin, SOSA is ecumenical, recruiting volunteer gleaners across all types of faith-based and community organizations, as well as distributing food through the likes of Harvest of Hope, USDA’s Farmers to Families, and scores of local food banks.

Parmele fondly recalls the time his group gleaned 28 flats of strawberries from a farmer’s market. Overflowing with ripe berries, Parmele called a local church to help with sharing the fruit. Three members from a Knoxville, TN, church picked up the flats, fanned out over the city and distributed the fruit to various food pantries.

“I’m sure the strawberries were consumed within 24 hours,” Parmele says, “That was a special one.”

The power of one

Frequently, groups will volunteer, but Ronnie Wendell, who says he has a “heart for the hungry,” is an example of what one person can do.

Wendell shrugged off the question that year, as well as at subsequent UMM conferences when the same person asked the same question. Fast forward a couple of decades and Wendell found himself gleaning cabbage alongside other UMM conference attendees.

“That stirred my spirit,” Wendell recalls, “and I said, ‘Yes, I’ll do it.’” Since that time and for more than 20 years, Wendell, working as a single SOSA volunteer in Ohio, has organized gleaning of apples, potatoes, watermelons, green beans, lettuce, and more. “Just about everything,” he sums up.

‘Giving is just part of being a Christian’

Mike Smith is appalled that more than 54 million Americans deal with food insecurity. Pair that reaction with a promise he made to God 23 years ago, and you’ll find Smith up by 7 a.m. most days to glean from Knoxville area locations, such as the University of Tennessee Organic Farm and local businesses, like Edible Arrangements, where buckets of fresh fruit are donated several times a week.

“The night before my open-heart surgery,” Smith recalls, “I told the Lord if I wake up that means You have something for me to do.”

“We give seed potatoes to folks too,” Smith adds. “Giving is just part of being a Christian.”

~ The Society of St. Andrew is an EngageMI Ministry Partner. You can support their work with gifts to Advance #801600. Bud “The Spud” Curtis was a layman from Fenton, MI. He was active in the Detroit Conference United Methodist Men during the 1980s, strong sponsor of the Society of St. Andrew. Curtis served as their official “Spokespotato.”