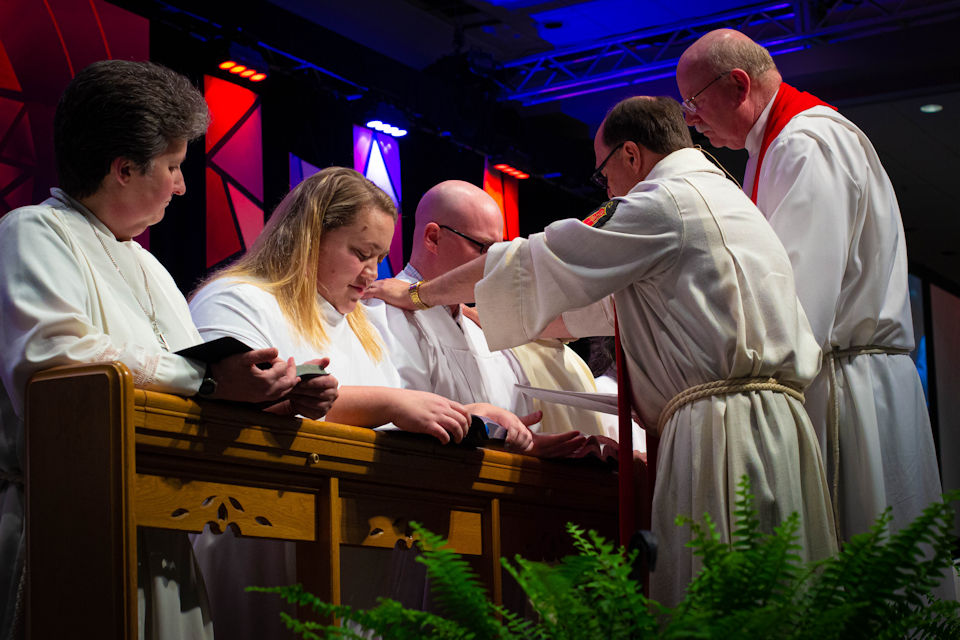 Bishop David Bard commissions Nicholas Bonsky for ordination as an elder in The United Methodist Church at the 2019 Michigan Annual Conference. ~ mic photo

The second in a series, “For such a time as this.” Newly commissioned Deacon LuAnne Hook and Elder Nicholas Bonsky talk about what life is like after hearing God’s call.

Sometimes, like Abraham and Sarah, God calls us out of our comfort zone, away from our home and kindred, to follow to a place we don’t know, a land which God will show us. Sometimes the call comes from within the familiar, the known world, at home. Both LuAnne Stanley Hook and Nicholas Bonsky would identify with the latter. They attribute their sense of call to the church communities where they were involved, and both continue to serve in the congregations which nurtured them in their journey into ordained ministry.

The Rev. Nicholas Bonsky began serving in youth ministry in his home congregation, Orchard United Methodist Church in Farmington Hills, MI and it was there where he says he, “…experienced the calling of God through the community around me.” The Rev. Margo Dexter, an ordained Deacon on the staff at Orchard at the time, encouraged him to work with youth and through that experience, Nick began to sense God was calling him toward ordination.

He says, “The youth I taught influenced my journey, as they asked challenging questions and revealed God to me in ways I had not seen before.” He credits the Revs. Suzanne Goodwin and Amy Mayo-Moyle, also clergy at Orchard, for helping him discern where God was leading in his life. For Nick this led to seminary and the journey toward ordination as an Elder. He was commissioned as a Provisional Elder at the 2019 Michigan Annual Conference and then was appointed as the Associate Pastor at Orchard UMC.

Rev. LuAnne Stanley Hook’s calling was rooted in the community at First United Methodist Church of Holland, MI. “I had long been interested in ministry, “she says,” especially the kind that happens outside of Sunday mornings, but it took me decades after going to seminary to really feel being ordained was the path for me.”

LuAnne worked in youth ministry for 12 years and coupled that with outreach ministries in the community. The Order of the Deacon was created by the denomination 20 years ago with the express purpose of setting apart clergy who would lead the church in servant ministry in the world, so LuAnn says, “Ordination as a Deacon became a way to both claim the call God has on my life and find the authority to call others to join me in working for God’s kingdom on earth.”

One of the early influences in her life was the Rev. Dr. Fred Lamar, the chaplain at DePauw University. He convinced her seminary was not just for those who were “called to preach” and helped her see where her gifts might fit in the servant ministry of the church. As a commissioned Provisional Deacon LuAnne is currently appointed to First United Methodist Church of Holland as the Director of Community Involvement, literally leading the church in servant ministry beyond Sunday morning, fulfilling her early desire and the calling of the United Methodist Ordained Deacon.

This series of articles lifts up the stories of newly commissioned Provisional Deacons and Elders who have chosen to enter the ordained ministry in a day when the church is in turmoil. Their commitment to ministry is a sign of hope for a struggling church.

LuAnne is honest about the struggle. She says, “When I began the ordination process, I was very hopeful our denomination was moving toward modeling a unity which is hard to find in our current culture. Now, I am apprehensive that we may end up modeling the worst of our divisive culture instead of pointing the way to a more radically inclusive, beloved community.”

However, as a Deacon, she finds her greatest hope in the places where the church is intersecting with the world at points of collaboration, creativity, and mutual respect. “This,” she says, “is where I see God’s grace being poured out each and every week.  This is where I find hope.”

Just as community was crucial to his calling, Nick goes back to the importance of the community as the source of hope. He says, “We need to recognize that God has called us into community. We believe in a relational God and to deny the power of the community is to deny a key essence of God.”

Nick hopes that by focusing on the building of the Body of Christ we will be able to see beyond our current crisis and keep our shared mission to “Make disciples of Jesus Christ for the transformation of the world” at the forefront.

These newly commissioned clergy hold out hope for our church. LuAnne concludes, “In the midst of some of the ‘old’ crumbling, I find hope in the many ‘new’ things that are still happening in the connection. I believe God is often at work creating new life in spaces that seem to be dying.”

In our congregations and communities, may we claim with these rising leaders, the promise of the Risen Christ, “Behold! I make all things new.”