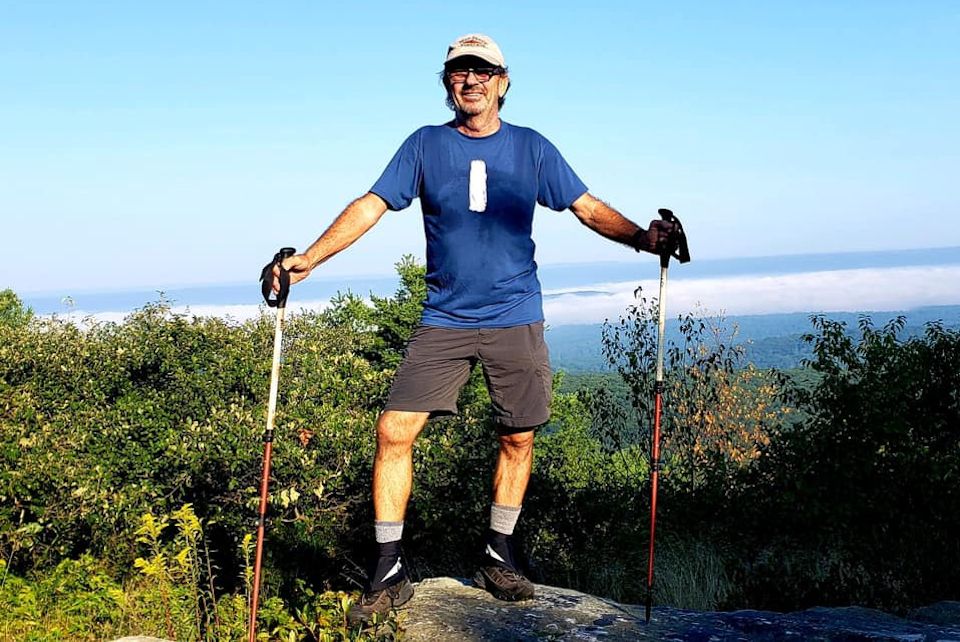 Dillon summits a mountain on the Appalachian Trail in the northeastern United States in August 2020. ~ photo courtesy Jimmy Dillon

He lives in Virginia but walks the Appalachian Trail in Pennsylvania. Jimmy Dillon embraces his calling to go into the wilderness and bring awareness to UMCOR.

Heart issues, cancer, and swelling limbs cannot ultimately defeat a Virginia man determined to walk the Appalachian Trail’s 2,198 miles to raise funds for the United Methodist Committee on Relief and Pennsylvania’s Mission Central supply depot. His commitment typifies the dedication of United Methodists who support the international disaster relief agency, which is celebrating its 80th anniversary.

In February 2018, Jimmy Dillon of Virginia Beach, VA, was attending his home church of Zion United Methodist Church in Seaford and listening to the Rev. David Magruder deliver a sermon about Jesus going into the wilderness for 40 days and 40 nights.

Instantly, Dillon realized his calling was to go into the wilderness and bring awareness to UMCOR. When the sermon was over, Dillon told his pastor about his plans and where the Lord was leading him. “He was 100% behind me,” Dillon said. “Two months later, I was on my way.”

On April 20, 2018, Dillon started on the first leg of his journey and headed from Waynesboro, VA, near his son’s home, to Carlisle, PA, close to his daughter’s home. Twenty-three days later, his daughter picked him up from the meeting point in Carlisle. A few days later, Dillon and his granddaughter Jayme hiked from Carlisle to Duncannon, PA. In total, he had hiked 283.2 miles.

“Since then, I have hiked a total of 526.5 miles in 48 days,” Dillon says. “We didn’t make the final 70 miles we had planned because my left knee swelled up, but I am committed to completing the journey.”

Prior to hitting the trail, he was involved with the assembly of kits that UMCOR distributes to those impacted by disasters. He and his friend, Jeff, delivered two tractor-trailer loads of cleaning kits to UMCOR Sager Brown in Baldwin, LA, and fell in love with what they were doing there.

“I have spoken about my mission at dozens of churches,” Dillon said. “I ask them to do better than the previous year and encourage them to make just one more kit than they did last year.”

“Many people have heard about UMCOR, but many have not. I was at a church in Pennsylvania that didn’t know anything about UMCOR. I actually spoke longer than the pastor because of the questions from the congregation,” Dillon shared. “I am asking church members to donate directly to UMCOR because of the pandemic and lack of kit building in churches that are closed.”

“UMCOR was founded in 1940 to help individuals impacted by World War II who were dealing with war, famine, and a forced migration where many walked hundreds of miles to find peace,” said Roland Fernandes, general secretary of Global Ministries and UMCOR. “It is our hope that people support Jimmy Dillon as he takes thousands of steps along the Appalachian Trail in honor of the steps taken by thousands of people helped by UMCOR during the past 80 years.”

In 2020, UMCOR and its partners adapted to the coronavirus pandemic’s challenges. They provided support, supplies, and counsel to thousands of people affected by the record number of fires, floods, and storms. This work is made possible by generous donors.

Dillon, 64, says he has survived a heart attack and surgery to remove a cancerous growth from the arch of his right foot during his life. Some days each step hurts, but Dillon knows he can do “all things through him that strengthens me” (Philippians 4:13, NRSV). He plans on returning to a southeast section of the trail this spring.

“I’m about a quarter of the way through the trail,” Dillon said. “I’m far from done and look forward to the next part of this adventure.”