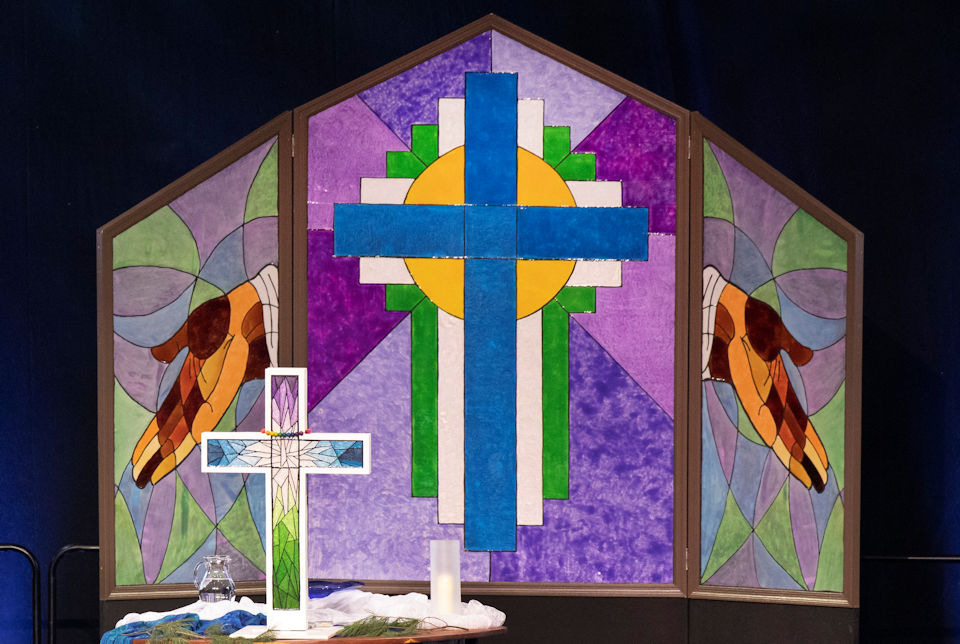 The altar art on stage during the 2019 United Methodist General Conference in St. Louis. Since the adjournment of the General Conference, individuals and groups have considered plans for the future of the denomination. ~ UMNS photo/Kathleen Barry

The Indianapolis Plan for proposed UMC separation, is being put forward by a group including traditional, progressive, and centrist viewpoints.

The United Methodist Church’s conflict over homosexuality is irreconcilable and calls for amicable separation into different denominations, according to a 12-person group of centrists, traditionalists and progressives that began meeting in late June.

“We’ve discovered The United Methodist Church can’t live in the same house together peaceably, but we can live next door to one another,” said the Rev. Kent Millard, president of United Theological Seminary and one of the group’s organizers.

Millard and the others have drafted basic provisions of what they’re calling the Indianapolis Plan, named for the city where they gathered in late June for intensive discussions.

The group hopes to get input from across the church so the plan can be revised and written in petition form by the Sept. 18 deadline for the 2020 General Conference.

The Indianapolis Plan envisions a Traditionalist United Methodist Church that would maintain the denomination’s current restrictions on same-sex weddings and ordination of “self-avowed practicing” gay clergy.

A separate Centrist/Progressive United Methodist Church would remove those restrictions, as well as church teaching that the practice of homosexuality is incompatible with Christian teaching.

The names in the plan are placeholders. Each denomination would decide what it would be called and could incorporate “United Methodist” into that name.

The Indianapolis Plan also holds out the possibility of a third denomination, a Progressive United Methodist Church that would practice immediate full inclusion of LGBTQ persons.

Significantly, the plan avoids dissolution, suggesting that “legal continuation” and most general church agencies would remain with the Centrist/Progressive United Methodist Church.

That’s OK with the Rev. Keith Boyette, president of the traditionalist Wesleyan Covenant Association and a member of the Indianapolis Plan group.

“One of them would carry on the legal framework, initially, of The United Methodist Church,” Boyette said. “It was not difficult for me, personally, to say that the centrist/progressive part of the church would do that. They have indicated more of an investment in that framework.”

The drafters of the Indianapolis Plan include pastors and top staff members of churches that belong to the Reconciling Ministries Network, which advocates for full LGBTQ inclusion. Along with Boyette, the Rev. Tom Lambrecht — vice president and general manager of Good News — represents the traditionalist perspective.

Millard and others are more centrist in their views.

Everyone from the group is from the U.S., but Millard said he has been in contact with Bishop John K. Yambasu, who leads the African College of Bishops.

The group members emphasized that they’re representing themselves, not their organizations, in putting forth the Indianapolis Plan. They see it as a work in progress, but all endorse the idea that the denomination needs to re-form into separate denominations.

“Our internal conflict is keeping us from our primary mission to make disciples of Christ for the transformation of the world,” said Lynette Fields, executive director of community transformation at St. Luke’s United Methodist Church, an LGBTQ-friendly congregation in Orlando, Florida. “I believe that an amicable separation or a birthing of new expressions will allow each new group to be healthier, more vibrant and mission-focused.”

The United Methodist Church has struggled for decades with how accepting to be of homosexuality. After schism seemed possible at the 2016 General Conference, bishops created a Commission on a Way Forward and called a special General Conference, held this past February in St. Louis.

Delegates there defeated the bishops’ favored One Church Plan and by a 438-384 margin approved the Traditional Plan, which reinforces the church’s restrictions on ordination and same-sex marriage.

The angry rhetoric and general rancor in St. Louis were followed by open resistance to the Traditional Plan, as well as by the departure of some traditionalist churches weary of the conflict.

The special General Conference and its aftermath led to the odd bedfellows’ work on the Indianapolis Plan.

“Throughout the history of the church there have been times when groups of people going different directions was necessary,” Fields said. “I believe we are at that moment in the life of the UMC.”

The Indianapolis Plan’s basic provisions include:

Separation needs to happen quickly, the Indianapolis Plan group says. They see annual conferences beginning to realign in August 2020, with inaugural General Conferences for the different denominations occurring in fall 2021.

The Indianapolis Plan “absolutely” could be approved by General Conference without time-consuming constitutional amendments, said Boyette, who has been a practicing lawyer and served on the Judicial Council, the denomination’s top court.

Though similar in some ways to the recently unveiled Bard-Jones Plan, the Indianapolis Plan goes farther by creating real separation of denominations, Boyette said.

Like Millard, Boyette has been using a certain analogy to explain. He compared Bard-Jones to people living in the same house, but in different rooms.

“What the Indianapolis Plan achieves is essentially saying, ʻOK, we’re going to be in different houses in the same neighborhood, and the neighborhood is the larger Wesleyan family,” Boyette said.

Boyette acknowledged that he’s part of other discussions about the future of The United Methodist Church, but described the Indianapolis Plan as “a fair and equitable and respectful approach to bringing to an end what has become a very damaging conflict.”

The Rev. Darren Cushman-Wood is part of the Indianapolis Plan group and hosted its in-person discussions at Indianapolis’ North United Methodist Church, where he is senior pastor.

“We’re a Reconciling Ministries Network congregation so it was a little surreal that in our parlor was the president of the WCA and the vice president of Good News,” Cushman-Wood said.

But he added that the group’s discussions were honest and prayerful, and in his view will result in legislation worth considering at General Conference 2020, set for May 5-15 in Minneapolis.

“I see the work of our group as simply being a service to the delegates, who are the real decision-makers.”

~ The group behind the Indianapolis Plan welcomes input. Contact the Rev. Kent Millard at kmillard@united.edu, the Rev. Keith Boyette at president@wesleyancovenant.org, or the Rev. Darron Cushman-Wood at dcushwood@northchurchindy.com.