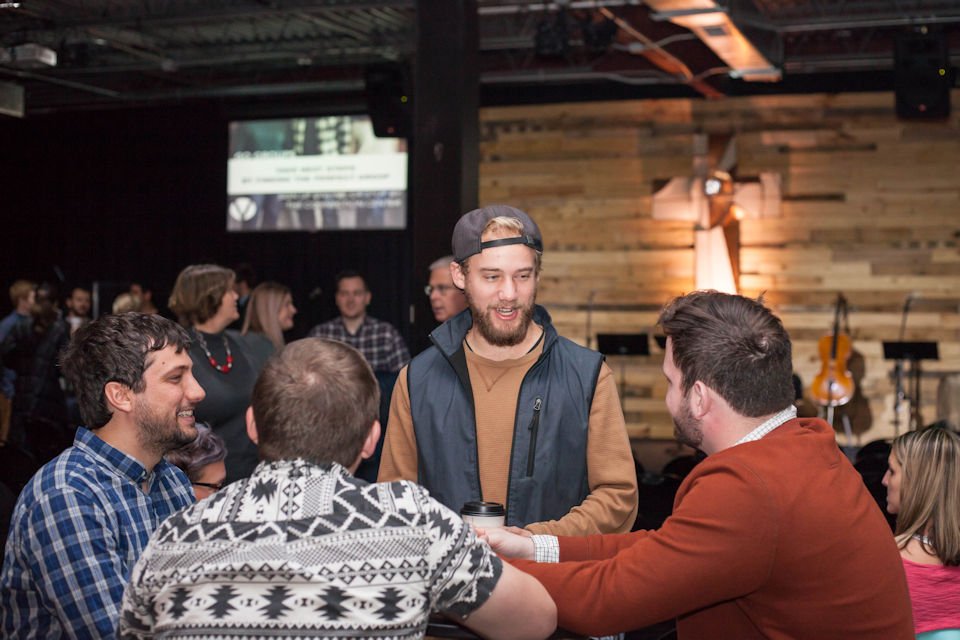 Welcome home! That's the vibe at Valley Church. Relationships are the foundation of the Valley experience. Valley Church in Allendale operates on the principle that "It's okay to have fun in faith," according to Lead Pastor Matt Bistayi. ~ photo courtesy Matt Bistayi

None other than Billy Graham once called Harry Denman, “one of the great mentors for evangelism.” Denman lived a simple life, made friends with everyone he met, and shared the love of Jesus far and wide. Denman died in 1976 but his spirit lives on in an award that honors those who bring people into a life-transforming relationship with Jesus Christ.

The Rev. Dirk Elliott, The Michigan Conference Director of Congregational Vibrancy, presented the Harry Denman Award to Matt Bistayi, Pastor of Valley Church in Allendale, during ceremonies on Saturday evening, June 1 at the Grand Traverse Resort.

Matt Bistayi is such a “package.” He and his wife, Shellie, were sent to Allendale in 2009 to start a new church. “It was a parachute drop,” Matt says. “The pastor and family are parachuted into the community, and they say, ‘Good luck!’” He reports that 70% of parachute church plants fail in the first two to three years. But after five years Matt reports that Valley Church “had hit its stride,” and now, ten years in, “we are gaining traction.”

Matt and his team launched Valley on October 10, 2010 with over 100 people in attendance. The church was totally self-sufficient, receiving no conference funding, by 2013, at which time they were chartered. The church is now averaging 175 in worship.

The pastor gives credit the community into which he was dropped saying, “We were blessed with people who came on board, and who wanted to do something different here in Allendale.” Plus, Matt had good instincts. “Part of my story in ministry is what I experienced in college … when I wished I had a community like Valley to surround me,” Matt explains. As they arrived in Allendale, “that was a big part of what was important to my wife and me. We wanted to care about the Grand Valley campus and its students.” The excitement of those young people about involvement in a local church became “a big part of why Valley succeeded in those early years.”

While Valley cared about the campus community, the young and growing congregation never met on campus. “We are not a college church,” Matt says, “though we do care about college students.” The infant Valley first met in the township hall and then moved to a banquet hall in the Main Street Pub. Outgrowing those spaces, the group leased space in the Chemical Bank building on M-45, and they have gathered there ever since. Eventually they would gut and repurpose the bank space to make it look like what it does today. “It’s a non-traditional space that fits our vibe and culture well,” Matt remarks. “Valley is not auditorium-style. We have more of a warehouse-feel. And God is moving in our space.”

The vision statement of Valley Church, which grew out of Matt’s passion, is: “Helping Others live For God, For People, For a Change.”

Asked to describe the “vibe at Valley,” Matt says, “At Valley we believe it’s okay to have fun in faith. We are laughing with Jesus and with each other.” But the main hallmark of the Valley faith-style is “making a difference in practical ways in the lives and relationships around us.” In a phrase, Matt describes the Valley vibe as, “super real.” He continues, “That’s what a lot of people say. When we meet each month for Pizza with the Pastor, that’s often what we hear.” And it’s clear that “real” does not mean “easy.” “At Valley we are not fake. We are honest. And we are able to laugh even when we screw up royally.”

Perhaps the realness factor at Valley merges out of their radical openness. “We value stories,” Matt shares. “Everyone’s story matters, and that means you matter to us.” What Valley loves is spelled out in compelling fashion on the homepage of their website. The statement concludes, “There are an endless number of things that divide us in the world and we’re convince that God and the church shouldn’t be one of them.”

The stories of individuals are just the starting point for relationship at Valley. Matt says, “Jesus changes everything. When Jesus gets ahold of someone, their life and story changes. They become infused with hope. Then they want to share that hope with others.” Matt often reminds the Valley family that, “It is not about us. The most important person at Valley is the person who’s not here yet.”

When asked what exciting things are going on in the life of Valley in 2019, Matt mentions the “15 babies being born this year.” He notes that it’s scary, too. “Where are we going to put them if they all show up on the same Sunday?” he laughs. Valley Kids Ministry is already repurposing space. Go Groups is another ministry that generates energy. Go Groups are 8-12 people meeting regularly to build community and to go deeper with what was preached on Sunday. “Go Groups do life together,” Matt says. “And we like to say, ‘Go somewhere and make a difference.’” Three Go Groups each received $500 grants during 2019 to enable their creative service projects. With that support one of the college Go Groups sponsored a Family Fun Day for those not able to go away on spring break. Another Go Group is planning a Back to School Boutique, open to the community to do “school shopping on the cheap.”

Now a decade old, the pastor says, “We are still learning who we are, what that means, and how we can become more of what God wants us to be.” They continue to “lean into growth.” Matt poses the question, “How can we be momentous enough that we can keep being faithful?”

Valley looks head to the next ten years with a bold vision. SENT is a two-year big-vision-initiative for mission ministry, and multiplication. “It’s also about a home for our church in the future as a launching pad for Disciples to be SENT from.” The SENT outlook is expressed this way on Valley’s website: “We don’t want to be a bunch of saved people, we want to be a bunch of SENT people. Who send other people. Across the street. Across the city. Across the world.” Read more about SENT here.

Upon presenting the award at the 2019 Annual Conference, Dirk Elliott said, “Matt describes his ministry by saying, ‘Reaching more people for Jesus is the vision. Because, we know that God is crazy in love with people and the more people who know that; the more lives become filled with the hope, grace, and love of Jesus.”

A “Super Real Evangelist” is not doing what he or she does for personal glory. The 2019 recipient of the Harry Denman Evangelism Award in the Michigan Conference concludes, “God and Valley are in the zone.” And that is what brings Pastor Matt Bistayi joy.