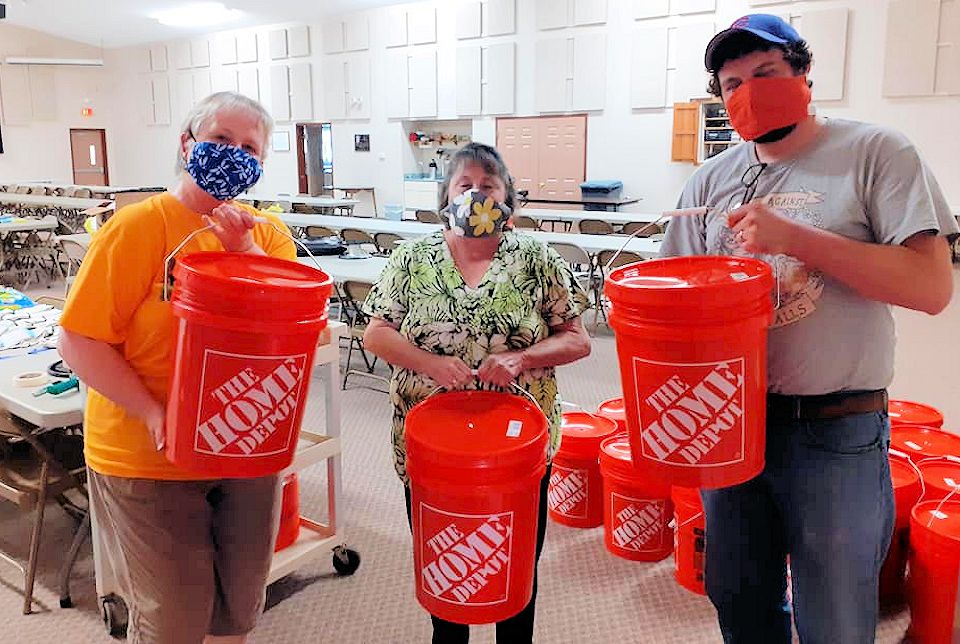 Faith United Methodist Church in Coleman became a hub for relief efforts taking place after the flooding in the Great Lakes Bay Region on May 19. ~ Facebook/Faith UMC

For ten months, churches have ministered in the shadow of COVID-19. It has been a time of great struggle and even greater faithfulness.

These are the faces that come to my mind when I think about the pandemic on my district. First, I see the faces of pastors and worship teams. In the beginning, they often looked clueless. Then there was frustration over not knowing how to make worship real and to share messages that connected. Soon smiles returned as they were able to step into this new thing, especially when they could worship in person with at least some of the congregation while providing the means for others to connect. Now, the smiles mix with weariness as yet another High Holy Season was compromised.

I see the masked faces of those who know, who get the undesirable but are unwilling to let it be the rule. I see the eyes that sparkle, hear the voices that lift, sense the spirit that overcomes.

Congregations on my district have struggled with the realities of COVID-19. The people of the churches miss the contacts, long for in-person relationships, and feel lonely and out of touch as a result. The congregations have struggled with how to worship, how to extend the love of God into their communities in meaningful ways, and how to make disciples when masked and socially distanced.

Some congregations have struggled against recommended and ordered precautions and protocols. “Is this thing even real?” Some congregations simply stepped back from doing anything. “This will be over in no time.”

Most congregations began “thinking outside the box,” began researching ways to make things happen, and then implemented ideas and plans with greater fervor than they would have if there had been no pandemic.

For all that, the congregations on the Central Bay District have remained connected with each other and their communities despite COVID-19. Care teams in congregations, many that did not have one, rose up to phone fellow congregants weekly, send notes of encouragement, pray with one another, and discern other ways to stay connected.

One church formed a group at Easter who, remaining socially distanced, visited several homes of different parish sections each Sunday for several weeks with songs, prayer, and a little gift. They have taken up Christmas caroling during the second shelter-in-place.

Pastors of many churches are posting daily devotionals, prayers, and/or readings of Scripture. After some training, Bibles studies have often resumed by zoom, with some boasting an increase in attendance. Many needed church meetings have utilized zoom, facetime, and other means to keep the “business” of church moving forward. These resources have also been the means to bring people together to brainstorm new ideas to do the church’s ministry.

I have seen God in the midst of the pandemic.

Summer outdoor worship became a norm instead of a novelty. Short-range FM transmitters allowed people to stay in their vehicles and still wave at one another while at the same time witnessing to the surrounding community because the range was not as short as it was thought to be. Community parks became worship centers.

Drive-by food pantries and soup kitchens sprang up all over as the churches realized that the ministry that was needed before was even more necessary now. Even community thanksgiving dinners were still served, with meals being eaten around the family table instead of in the church fellowship hall. Other churches joined together to sponsor and help distribute semi-truckloads of food regularly to the people of their various communities.

Pastors and lay members alike are amazed that “our little church” message is being heard by many more than ever would have been seated in church on a Sunday; in fact, many share regular attendance by persons/families in other states and nations. We may never know how the Holy Spirit has influenced many because of God’s people’s faithfulness.

God has utilized this pandemic in ways that have transformed churches. Some have invested in necessary means to present the message on line consistently and with quality. Some realize that they can do things they’ve never done before. Some have stepped into the 21st century with a boldness not thought possible.

All have understood that what they have done is not of themselves. It was and continues to be a gift of God. All are realizing that “God causes everything to work together for the good of those who love God and are called according to his purpose for them” (Romans 8:28 NLT).