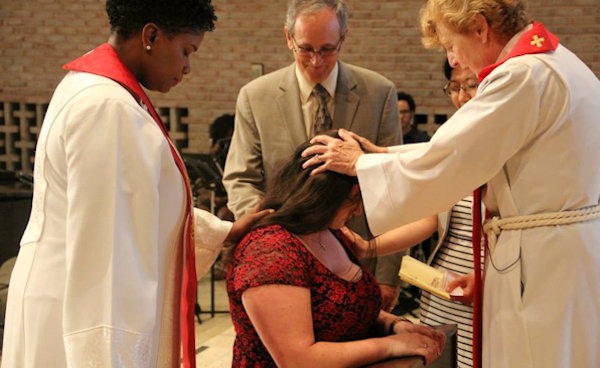 In August of 2015 Kayla Flannery was commissioned as a Global Mission Fellow of The United Methodist Church in ceremonies held in New York City. ~Facebook/Kayla Flannery

A Disney character sheds light on the experiences of a young adult transforming the world in Detroit.
KAYLA FLANNERY
Global Mission Fellow

In November of 2016 Disney released its 56th animated movie. I’ll give you one guess… Yep that’s right its Moana. It really isn’t a surprise that I wanted to go and see the movie as soon as I could after it came out. I love basically everything Disney and so I was really interested in seeing if I really liked this new movie as much as I love the oldies such as Beauty and the Beast, Mulan and Toy Story just to name a few of my favorites. Before we even went to see it I had heard parts of the soundtrack online and I was really excited for the music too since Lin- Manuel Miranda was one of the song writers.

There I was sitting in the movie theater with my mom, my cousin and her young daughter and it just hits me how much I feel like Moana in my life right now! Darn it Disney for hitting me right in the feel with this one! In the movie Moana has this theme song that has gotten pretty popular recently and that’s what I want to talk about. It’s a really great song and here is the clip so you can enjoy!

Throughout that song Moana is struggling with where she is feeling called to head towards. It’s just a little bit familiar considering that was just about how I was feeling nearly two years ago while I was working on my application for the US-2 program. During that time I wasn’t really sure why I was feeling the need to apply for a program that would take me out of Arizona for two whole years.

“See the light as it shines on the sea?
It’s blinding
But no one knows
How deep it goes
And it seems like it’s calling out to me
So come find me
And let me know
What’s beyond that line, will I cross that line?”

As we all know, I crossed line and have been living in Detroit for about 18 months now.

There is one other part of the song that has really stuck with me over the last few months of listening to it. Towards the beginning of the song she sings:

I’ve always tried to do the best I could to make my parents and my family as a whole proud of me and the decisions I’ve made. Granted, moving 2,000 miles away from all of them probably wasn’t the best way of showing it but I promise I am trying! The thing is though with moving away I’ve had the privilege to have some amazing opportunities to spread my wings and raise my voice for the things I believe.

The first was last April when our US-2 class participated in Ecumenical Advocacy Days which happened to overlap with the Monday that The Supreme Court was hearing cases regarding DAPA and DACA. That day people gathered there to let their feelings be known about the case and, since we had a little time in the middle of that day, a few of us headed there as a show of support.

The second was just a few weekends ago when I spent 24 out of 36 hours on a bus to go to D.C. again but this time for The Women’s March on Washington. When I was first told of the possibility of being able to go I was a little nervous and wasn’t sure if I would go through with it. That changed though while I was home for Christmas and one night my dad was watching TV and called me in to ask me if the event that Rachel Maddow was talking about was the one I was going to. When I told him, “Yes that’s what I’m going to,” this big smile stretched across his face.

In the days leading up to it I really struggled with feeling very anxious and uncertain about how the day was going to go. I had seen on social media the comments that people were making about the march in D.C. and the sister marches around the world and I grew even more anxious. As soon as I stepped off the bus that Saturday morning in D.C. I finally felt calm. I knew the day ahead was going to take every ounce of strength I had, but I was ready to face it and join what turned out to be over 500,000 other people who were there that day to stand up for what they believe in. Since there were so many people there we didn’t make it near the stage. So I didn’t hear anything that was said by any of the organizers or speakers. What I did hear were chants, songs and personal stories of the people around us telling why they were there and where they had traveled from.

In some ways I’m fine with the fact that I didn’t make it near the stage because we ended up in the middle of the National Mall. I looked to my right and I saw people to the Washington Monument and I looked to my left and saw people to the Capitol. That is an image and a feeling that I will never be able to forget and will draw upon in the years to come.

I know my life isn’t exactly the same as the life of a Disney character, but I’d like to think that, like Moana, I’m doing something right in the eyes of my parents as I strive towards being as close to a perfect daughter as I can be.