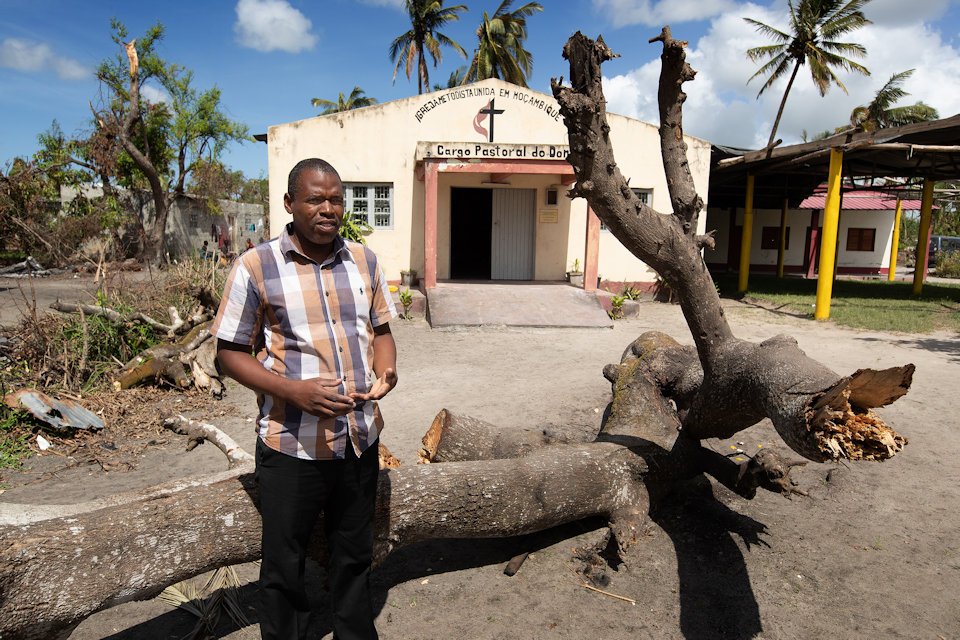 The United Methodist Church is helping people pick up the pieces of their lives after a cyclone killed hundreds and displaced thousands in southern Africa.

MOZAMBIQUE | May 6, 2019 — Cyclone Idai came in the darkest hours of the night, and she did not come quietly. With winds up to 125 miles per hour, the cyclone ripped tin roofs off houses and hurtled them like deadly missiles that killed and maimed.

Otherwise placid rivers jumped their banks and submerged towns and villages, drowning hundreds and leaving hundreds of thousands more with no homes or possessions throughout Mozambique, Malawi and Zimbabwe. The final death toll is 843 — but hundreds are still missing.

One month later, Isabel João and her mother and aunt, Maria Lidia and Luise Marufo António, were scavenging for food in their cornfields in Buzi, where fully-grown cornstalks were black from days spent under water. The cyclone came just days before the corn would have been harvested, robbing the planters of a year’s supply of food.

The women were bright spots in a sea of green grass as they slowly picked their way through the muddy fields. The trio toiled silently under the hot sun.

Checking each stalk, they shucked the rotten corn and piled the cobs on the ground to take home. They were hoping for enough to eat, feed their animals and perhaps harvest seed kernels that will be sowed into the dark earth for the next planting season in August.

“Hunger is the number one problem now,” said João.

Cyclone Idai made landfall March 14 near Beira, the fourth-largest city in Mozambique. Buzi is a rural area about 16 miles inland from Beira. Help was slow to reach Buzi because the catastrophic flooding destroyed the roads and bridges connecting it to larger areas.

“We suffered a lot. No one has a house, the roofs are gone,” said Maria. “The floods came, taking clothes, food, chickens.”

The women said the storm came while they were sleeping.

“Police sirens woke us up and (officials) told us to get together and head for higher ground,” João said. She said the storm destroyed all the houses made of tree branches and mud, but permanent buildings from brick or concrete survived.

A drive through the heart of the community is like entering a ghost town. Municipal buildings are still standing but badly damaged. Most of the people in the village made their homes from branches and tree limbs tied together then covered by mud. Those collapsed in the storm.

“We didn’t know we would survive. I think God knows what has happened and keeps protecting us,” said Luise António.

Respeito Chirrinze, Mozambique episcopal area disaster management coordinator, said that the United Methodist Committee on Relief has provided a $10,000 grant to provide food and sanitation to areas affected by Cyclone Idai. UMCOR has helped 180 families in Nicoadala in the resettlement center of Dicudiwa; 37 families in the United Methodist Church Mozambique Training Center in Dondo District in Manica Province and 35 people at the Dondo Orphanage, he said.