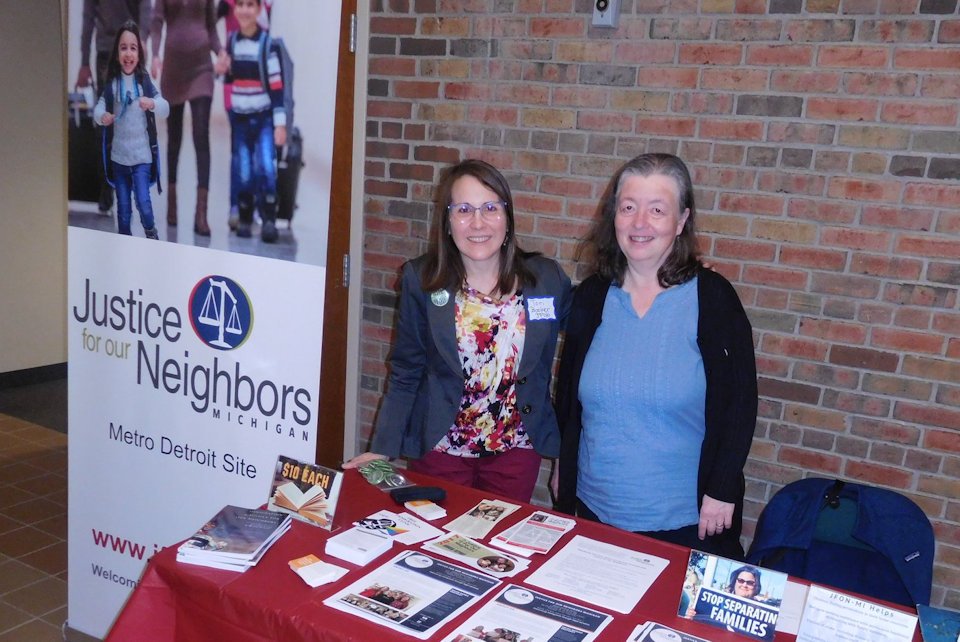 Tireless workers for those seeking new life. Tori Booker (left) and Melanie Goldberg share about the ministry of Justice For Our Neighbors at the recent Keep Making Peace Event held in Lansing on April 6, 2019.

The annual Peace with Justice Offering is about more than money. It’s about people, like Samil, whose life was changed by Justice For Our Neighbors Michigan, a Peace-with-Justice supported ministry.

In his journey from Bangladesh to the United States, Samil traveled through 10 countries – United Arab Emirates, Brazil, Peru, Ecuador, Columbia, Panama, Costa Rica, Nicaragua, El Salvador and Mexico. In 2015, crossing the border from Mexico into the U.S., he was immediately detained and incarcerated in Texas for eight months. Fleeing religious persecution in his home country, he had left his wife and two young sons in hiding.

In August, Samil arrived at a detention center in Monroe, Michigan, where he met Elizabeth Hammer. She is a volunteer with the Interfaith Detainee Visitation Program (IDVP) and a member of First United Methodist Church, Chelsea, Michigan. After learning Samil’s story through an Arabic-English speaking detainee, Hammer began advocating for him.

Melanie Goldberg, an attorney with Justice for Our Neighbors-Southeastern Michigan(JFON-SEMI), met with local friends of Samil to review his case. Goldberg put him in touch with the Southwest Detroit Immigrant and Refugee Center. A lawyer immediately agreed to represent and continues to support Samil. Despite denial of his request for political asylum, Samil and his attorney await a favorable appeal.

Immigrant men need to know they are not alone and that a larger community cares for them, asserts Victoria “Tori” Booker, site director of JFON-SEMI.

A United Methodist faith-driven ministry, JFON-SEMI welcomes immigrants into churches and communities by providing free or low-cost, high-quality immigration legal services, education and advocacy. The program model is church-based and grassroots with many dedicated, reliable volunteers. In addition, IDFP provides friendship and emotional and spiritual support for immigrant men in detention.

“In 2013,” Booker recalls, “JFON-SEMI and Catholic leaders felt a calling to go beyond offering legal services to immigrants to supporting those who were detained as a result of their legal status in the country.” They saw it as an extension of intentional hospitality.

The visitation program “strives to offer some degree of support and hope to these men who find themselves isolated from all they know and often have no financial or familial resources to secure their release,” she adds.

In preparation for JFON-SEMI’s biweekly visits, four to six volunteers gather in the lobby of the detention facility. The volunteers – from United Methodist, Catholic and Church of Christ faith communities – bring snacks, drinks, Bibles and devotional readings. An officer greets and escorts them to meeting room where detainees eventually join them.

Meeting in an open area without glass partitions is a plus, Booker says. “The men always reach out to shake our hands when they enter,” she explains. “After enjoying snacks, they talk individually with the volunteers. We talk about their situation, their families and life outside of jail, their home countries. If requested, we pray together. In some cases, the men ask us to contact a lawyer or a family member on their behalf as they cannot receive incoming calls, and outgoing calls are expensive. When our two-hour visit is over, we depart, sign out and debrief and process or share our experiences.”

The goal is simply to show compassionate hospitality to men like Samil, who are distraught, stressed or feeling hopeless.

Samil struggles to remain hopeful. “He tearfully expresses confusion over why he is detained and is anguished by the fact that he has not been able to communicate regularly with his wife,” Laura Sonnenmark from the national JFON office, wrote in an article. With no money to purchase a phone card, Samil relies on the generosity of other detainees who allow him to use their cards.

Determined to find Bengali resources and an imam who could offer Samil spiritual support in his Muslim faith, Hammer met with an imam in who gave her a Koran and several other books in Bangali for Samil. The imam has applied to join the IDVP so he can directly offer comfort and guidance to Samil and other Muslim men.

“At our last visit earlier this month,” Sonnenmark added, “Samil expressed gratitude for the books and eagerly shared a picture of his wife and young sons he had recently received. He still suffers from tremendous stress over the uncertainty of his future, but is comforted that a community outside of the jail is accompanying him.”

Being – and making – disciples

Booker sees JFON-SEMI as an extension of United Methodism’s call to make disciples of Jesus Christ for the transformation of the world.

“Throughout Scripture,” she says, “the call of God is to care for the least, the lost and the left out, or, more specifically, the widow, the orphan and the stranger (or immigrant) in our midst. This is what we strive to do with the men in detention. Through hospitality in a Christlike manner, those we serve may be inspired to respond in discipleship.

“We even encounter people of other faiths,” Booker continues, “who may find their hearts transformed as they see us living out our faith in Jesus Christ through serving them in this difficult time in their lives. We make disciples and transform the world by example.”

A grant – made possible by United Methodist generosity on Peace with Justice Sunday – proved essential for JFON-SEMI.

“As a small, grassroots legal-ministry organization,” Booker notes, “we are grateful for the financial support …, especially those that understand that not all worthy programs have 501c3 status. Because we are not yet eligible to apply for larger, foundation funding, the support from Peace with Justice Sunday has allowed us to continue working with our Interfaith Detainee Visitation Program. We are very proud to receive this grant.”

She encourages United Methodists to show their support by giving generously.

“In doing so,” Booker says, “you are providing critical financial stability as well as moral support to small organizations that live out the values of The United Methodist Church.”