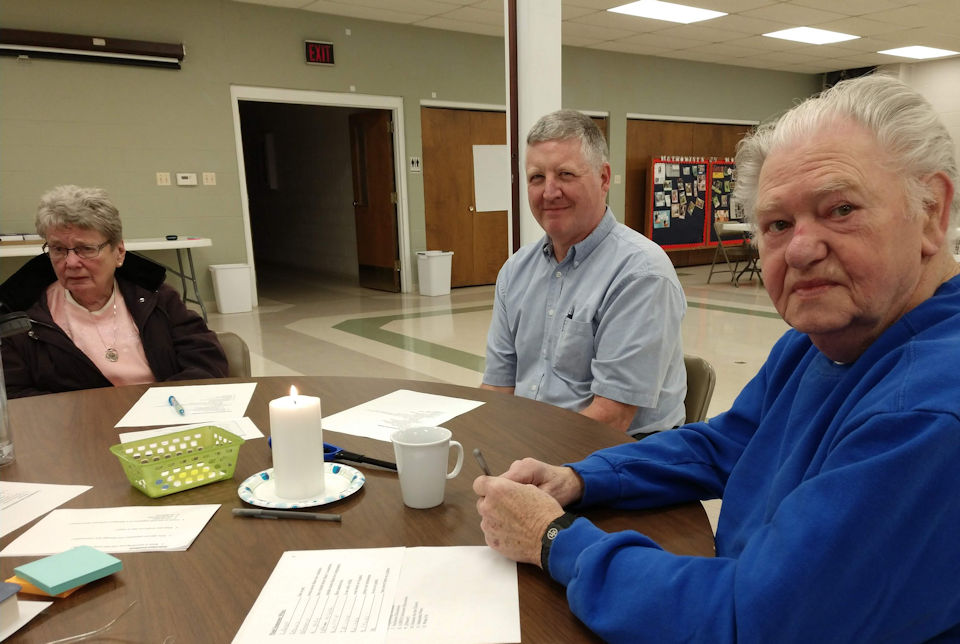 A candle on each table reminded participants that the Holy Spirit was present in the midst of their conversations on tough topics at Manchester United Methodist Church. ~ photo courtesy Dillon Burns

Arriving in Manchester two years ago, Pastor Dillon Burns didn’t want “to shake the boat.” Now he and the congregation are finding the courage to engage in healthy conversations.

In 2018 The United Methodist Church marked five decades as a denomination. It was a short-lived celebration. By February 2019, many began to measure the future of The United Methodist Church in years, if not in months. The outcome of the special called General Conference produced not the hoped-for unity, but deeper division within the denomination.

The future of The UMC is uncertain, and individual pastors and laypersons are dealing with the tensions surrounding that in a variety of ways. Some resist. Some retire. Others take to social media. There are those who craft legislation, and there are those who leave. One person’s delight is another person’s depression. “We live in interesting times … a liminal season,” said Bishop David Bard in his recent blog.

This is the story of Manchester United Methodist Church, one of the many Michigan congregations that take the concluding words from that same blog seriously: “Your thoughts, your prayers, your discernment are important and valued.”

The Rev. Dillon Burns has pastored Manchester First since July 2017. He looks back. “I have been here for almost three years, and all the conversation about LGBTQ inclusion has been going on that whole time. Since I was new, I told myself I didn’t want to dive right into it.” Some time passed “Then I realized I had not wanted to be the one to shake the boat and start conversations because not talking about it is so much easier,” Burns says. “That’s the easy way, but it misses an opportunity to engage with each other and with God. To have conversations about hard subjects strengthens our spiritual life and informs our faith no matter where we stand on a spectrum of beliefs.”

At that point, Dillon decided that he couldn’t miss an opportunity to help himself and the congregation grow. He realized that the United Methodists in Manchester did not have to be mere spectators regarding what was happening in the larger church of which they are a part.  “It is easy to say we have no control over what happens because of the way we make decisions in The UMC,” he reflects. “But when there are a lot of people who want to talk, you don’t have to feel like you’re nothing more than a ball bouncing around in a pinball machine.”

Burns considered having “town halls” for Manchester members. “But that suggested someone in front with a microphone answering questions,” he reflects. So, he approached the Staff Parish Relations Committee with the idea of having Courageous Conversations. He found resources on the websites of The Michigan Conference and Discipleship Ministries. And then he adapted them for use in two-hour sessions on two Sunday afternoons in February. Pastor Burns guided the first session on February 10; the second experience will take place on February 23.

Looking back on the February 10 session, Burns notes, “We first spent a lot of time creating a healthy environment to build trust among the folks sitting around those three tables.” Then those gathered spent time doing “Lectio Divina on church unity.” (Lectio Divina involves reading scripture, meditation, and prayer.) After that came the setting up of some ground rules about Holy Conferencing and how to reframe responses. Click here for details.

That lead to a conversation around inclusion in the church. “We found a pretty broad space of agreement that we want more people in the church and that the church should be a place for everybody to come and encounter God,” Burns reports. “We were unified in our desire to welcome everyone to come to the church and experience life change.”

They then went deeper into conversation around LGBTQ inclusion, marriage, and ordination. Burns describes their “diving off point” for this conversation. “I asked each person to share about the journey they had taken that led them to their current understanding of LGBTQ inclusion,” he says. “That built more than an individual narrative and helped us engage each other as human beings.” The evening concluded with dinner and more table talk.

Was it scary? Yes. “It takes a whole lot of courage to trust the vulnerable parts of us with other people,” he reflects. “To trust that what we have and who we are will be understood and appreciated in all the similarities and differences we have between each other is a risk.” He adds, “The courage of those who came and participated exceeded any courage I displayed in making it happen.” Burns is encouraged by “folks’ ability to listen, respectfully, to those wildly different from themselves as they searched for understanding together.” No debates or one-upmanship took place. “There was a real Christian spirit in the room,” Dillon says.

Pastor Burns had planned for the second session to be an alternative for those who couldn’t attend the first. However, he is adapting his plan yet again as many expressed a desire to come back. “Participants felt there was more they could do to hear and understand each other and dive deeper,” he explains. He sees a possibility that additional Holy Conversation settings may be added to the church calendar. “We will take all the time we need,” he asserts.

Manchester UMC had, in the past, done a Bible study on human sexuality using Cokesbury resources. That was helpful and was attended by some in the congregation. They had also had a town hall last year before the 2019 General Conference to explain plans and possibilities around polity and to answer questions. “The Holy Conversations,” Dillon notes, “have included folks I haven’t seen before. This seems to be what they needed at this time rather than another Bible study or town hall.”

He adds, “Earlier, I thought the church needed to sort out where they are in the midst of everything going on. I thought the goal should be to get some language into a statement – this is who we are – to know where we are going if the church splits.” Then Burns reconsidered: “Who knows what will happen in May? Now is not a good time to make those sorts of decisions.” The Courageous Conversations provided an opportunity to “listen to the people who make up the church and to strengthen the relationship between those of diverse viewpoints.”

With one Courageous Conversation done, he says, “I hope that the core members are more settled about what may come. We are building strong bonds to ground our church so that no matter what happens around us, we will be able to hold onto each other and what we value.” The awareness itself is valuable. Burns reflects, “If you’re not talking about these possibilities beforehand, it is traumatic when you read headlines in the New York Times with no idea what they are about.”

Yes, Courageous Conversations are scary, but worth it, according to Manchester’s pastor. “The experience of having space where you could trust other people in the room to hear you and appreciate what you have to say is immensely valuable. I think the real goal and outcome is to strengthen relationships between individuals.” According to Dillon, that’s only the beginning. “When that happens, a congregation will do incredible things, some completely unrelated to this moment in the Methodist world.”