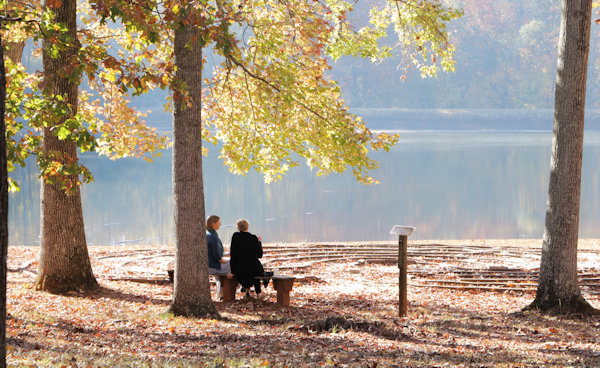 On November 20 the Board of Global Ministries sent out 45 trained caregivers of creation.

“The Spirit is calling us to a place of wholeness, and the Earthkeepers are a great first step in participating in that mission movement,” said Denise Honeycutt, CMI’s executive director.

CMI launched the Earthkeepers’ training as a response to the growing awareness of creation care as an essential part of our discipleship as Christians. Earthkeepers are United Methodists who discerned a call from God to a vocation of caring for God’s creation. Global Ministries’ Theology of Mission asserts: “God’s Mission reclaims the life of all creatures and redeems all creation for God’s intended purpose.” Previously, Pat Watkins was the only United Methodist missionary appointed to the care of God’s creation, but as a part of this pilot program, CMI commissioned 45 United Methodist Earthkeepers.

Global Ministries celebrates Earthkeepers as a new ministry that hopes to address issues of environmental justice. Initially, it was designed to be a U.S.-based mission, but after further discernment, it became clear Earthkeepers was destined to be a worldwide ministry.

During the Earthkeepers’ training, participants discussed community projects they are currently involved in or would like to start. The training was designed so that when they returned home, the Earthkeepers would have concrete plans for how to bring their projects to life.

“They came together from around the world, we provided training, the opportunity to learn from each other, and then commissioned them to go back into their communities to live out their call,” Honeycutt said. “Most of these Earthkeepers will be doing innovative creation care work as volunteers.”

“I think people have to understand that the earth is a house. You have to take care of your house.” ~Anahi Albert D’Amato

Sotico Pagulayan, an Earthkeeper from the Philippines, said he resonated with the importance of taking care of the land we are entrusted with. “I am the son of a farmer, so I have a deep connection with the land. And in terms of having a good yield of your crops, you need to take care of the soil.”

Dottie Yunger, a clergy member of the Baltimore-Washington Conference and a marine biologist, was concerned about the health of subsistence fishermen fishing in the Anacostia River in Washington D.C., due to the toxic levels of pollution in the river and the cancerous lesions on the fish being caught. Because she listened to the fishermen and others in the community, what began as a campaign to let fishermen know that they should not eat fish from the Anacostia, grew into a community-organizing project that has resulted in community gardens, market gardens, a fish farm, and green-jobs training for young African American men in the Fourth Ward, one of the poorest wards in the city. For Yunger, Earthkeepers is the perfect ministry and combines marine biology, ordained ministry, and bringing the church into the community, which, according to her, is where the church belongs.

Earthkeepers are keenly aware of the ecological challenges in our world today and feel called to be part of a movement to transform the world. Anahi Alberti D’Amato, an Earthkeeper from Argentina, said, “I think people have to understand that the earth is a house. You have to take care of your house.” We hope to impact environmental justice through the work of Earthkeepers.

During the commissioning at Grace United Methodist Church in Atlanta, Thomas Kemper, general secretary of Global Ministries, read an excerpt from the Document on Mission and Evangelism for the 21st Century: “God’s love does not proclaim human salvation separate from the renewal of the whole creation.”

“Earthkeepers have felt a vocational call by God to care for God’s creation. We understand this call to be a biblical mandate for all Christians to care for the earth,” said Pat Watkins, United Methodist missionary for the care of God’s creation, during the commissioning. “For many of them, they have been waiting a very long time for their church to validate their call to a mission of creation care. Well, Earthkeepers, your wait is over! Today is the day!”

CMI hopes to commission more than 500 Earthkeepers in the near future.