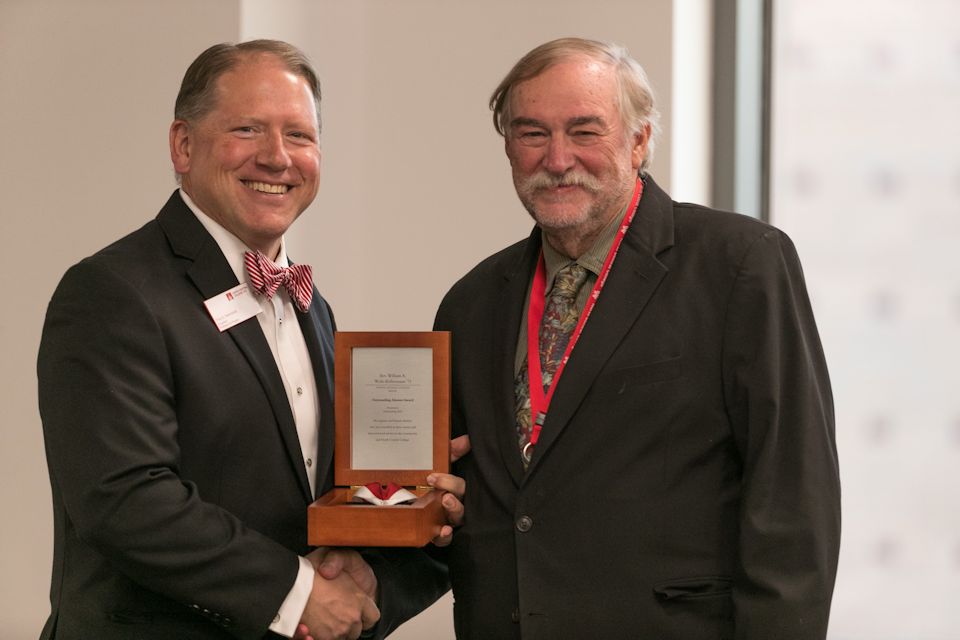 On September 25, 2021, the Rev. William Wylie-Kellermann was among those honored as distinguished alumni by North Central College in  Naperville, IL.

North Central College honored distinguished alumni—including the Rev. William Wylie-Kellermann ’71—during the College’s 2021 Homecoming Outstanding Alumni Awards ceremony on September 25. The Outstanding Alumni Awards are presented annually to one or more alumni who graduated more than 15 years ago, have excelled in their careers, and demonstrated service to the community and North Central College.

Wylie-Kellermann, a Detroit native, looks to his time at North Central as the starting point for his commitment to non-violent community activism and his career as a pastor (now retired) in the United Methodist Church. Throughout the years, Wylie-Kellermann has made “good trouble,” betting his life on the gospel of non-violence, good news to the poor, beloved community, and freedom from the power of death.

At a convocation arranged by College Chaplain Larry Boldin, Wylie-Kellermann listened to William Stringfellow, a Harlem freedom struggle attorney and theologian exposing the powers of white supremacy and militarism. Stringfellow would become a mentor and the subject of several books Wylie-Kellermann authored. His most recent book concerns one of Stringfellow’s friends in nonviolent resistance: “Celebrant’s Flame: Daniel Berrigan in Memory and Reflection.”

Wylie-Kellermann attributes the shaping of his vocation to campus activism, like those who formed the Black Student Association, fostered the student movement, and traveled to anti-war moratoriums and Chicago neighborhoods, and the seminarians across campus who renounced draft cards—all active to this day.

Wylie-Kellermann graduated from Union Theological Seminary in New York City and was ordained an Edler in the Detroit Conference in 1980. He most recently served St. Peter’s Episcopal Church in Detroit. He retired in 2017 and lives in Detroit.

North Central College, located in Naperville, IL, was founded in 1861. Today North Central is home to nearly 3,000 students. Visit northcentralcollege.edu to discover why U.S. News & World Report has named North Central a “Best in the Midwest” school for 20 years in a row.